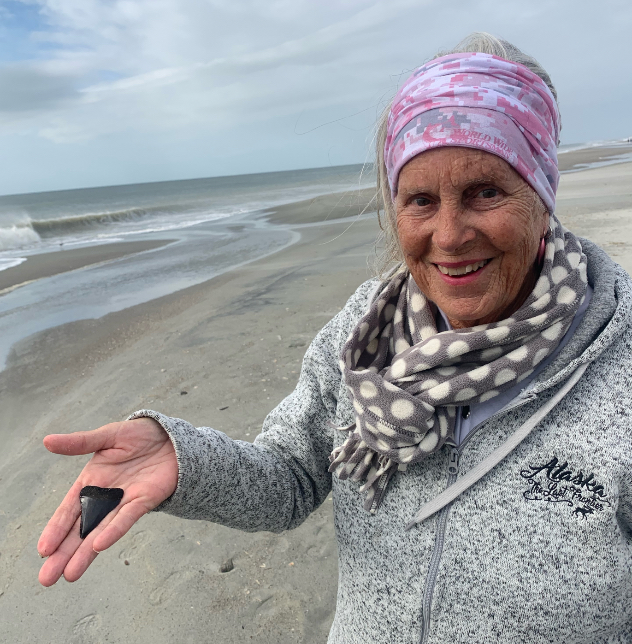 Growing up in Albemarle, Annette Starnes always had a passion for going to the beach each summer with her parents and scouring the area for a particular find: shark’s teeth.

When she was a young girl, her uncle found an intact great white shark tooth which he gave to Starnes’ mother, Isabelle Morgan, about 65 years ago. She fashioned it into a necklace and, once her mother died, Starnes began wearing it.

“She knew I loved it,” Starnes said. “I would borrow it as a teenager and wear it to school.”

Inspired by her uncle’s find, Starnes went about trying to discover an intact great white shark tooth of her own, but could never find one. That changed this year when she was with her family at Holden Beach.

“I was walking in the sand, not in the water’s edge, and I happened to see a little black dot,” she said. “It was just laying there on top of the sand, and there were no other shells or anything around it.”

Surprised that nobody else had already taken it, Starnes eagerly picked up the roughly 1.5-inch prize for which she had been looking for more than 60 years. It was the biggest tooth she had ever found, even surpassing the one her uncle found those many years ago.

“It’s special,” she added. “That shark’s tooth is really special.”

Her next goal is to look for an intact tooth from the Megalodon, an extinct species of mackerel shark that lived millions of years ago. She has already identified beaches where such teeth have been found. The biggest shark in existence, the Megalodon was between 40 and 60 feet in length and weighed between 50 and 75 tons.

Over the years, Starnes’ passion for shark’s teeth rubbed off on her two daughters and their children. Her husband, Rocky, also enjoys the search. 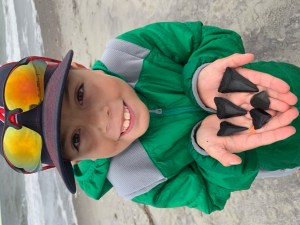 Her family continues to frequent beaches in North Carolina and South Carolina every year, looking for treasures such as sand dollars, conchs and clam shells — but nothing beats the joy of discovering shark’s teeth.

“The most special find was always known to be a shark’s tooth,” Starnes said, estimating she has probably collected more than 1,000, the large majority of which are fragments. By comparing her teeth to images online, Starnes said she is pretty confident most of the teeth and fragments are from great white sharks.

“It’s very impressive when you find a whole one that has not been jumbled up with shells and…washed around the ocean,” Starnes said. 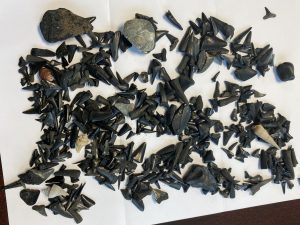 For Starnes, who acknowledges finding such treasures are always a matter of luck, the hunt is always the best part. She said the best places to search are at the water’s edge, especially when the waves are receding.

“It’s exciting because each wave will bring the possibility of a shark’s tooth,” she said. “When you do find one, automatically a big scream comes out: ‘Look what I found!’ and people on the beach will rush up and come look at what you found.”