Hatley created ministry to help homeless, those in need

About 25 years ago, Craig Hatley says God presented a vision about being part of a revival-type ministry that would begin at Courthouse Square Park in downtown Albemarle as a way of helping those less fortunate.

Hatley did not think much about the vision until 2018, when he says God again pressed upon him the importance of starting his own ministry. At the time, Hatley and his wife Kelly were members of a downtown Albemarle church, where he juggled numerous responsibilities, including helping with worship as a musician each Sunday.

God “ultimately provided me with an ultimatum,” Hatley recalled. “He said, ‘Craig, you can’t keep doing church like you’ve been doing, I have something different for you.’ ” 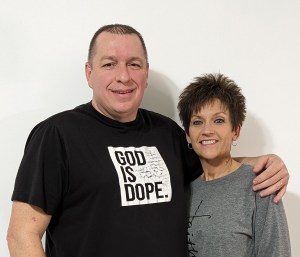 Craig Hatley, shown wife his wife Kelly, started his own ministry in 2018 to help those less fortunate. Photo courtesy of Craig Hatley.

Hatley left his church and, trusting in his faith, took a chance.

Before he made it to the park, in October 2018, Hatley first drove through Burger King and ordered a few sandwiches. Once at the park, as he was eating breakfast and praying for discernment on how to go about creating this ministry, he encountered a homeless individual and shared one of his sandwiches with the man.

A couple days before Christmas of that year, Hatley says God again spoke to him, providing more details. He told Hatley to start a church at the park, but unlike typical places of worship, which include traditional worship services, his ministry would be about providing food to the hungry and cultivating relationships through one-on-on interactions.

Shortly after, a routine was established: Hatley and Kelly, who live in the Millingport area, start each morning by picking up Burger King sandwiches (“they basically have a standing order ready for us at opening time,” he said) before arriving at the park around 7:15 a.m. and spending most of the morning talking and sharing meals with those in attendance. It is often a mix of people though many are homeless. He usually concludes his ministry around noon.

The same procedure has occurred almost every Sunday since Hatley, a Stanly native who owns a cybersecurity consulting firm, first established the ministry three years ago, including during the early stages of the Covid pandemic in 2020.

Hatley, usually donning his black “God Is Dope” T-shirt, speaks with about 30 individuals on average, though the number often spikes to more than 50 during the summer, and typically picks up 50 sandwiches to distribute along with coffee, water and a variety of juices.

“Usually between 25 and 35 is a pretty good number,” Hatley said, noting he tries his best to not miss more than one Sunday a year. “For the most part, we try and be there every Sunday.”

The name of his ministry, which he calls Something Tangible, was borne out of an experience earlier in 2018, when Hatley became frustrated that he could not help people in Texas recovering from a hurricane as extensively as he would have liked.

“In that moment I was like, ‘Dang it, we need to do something tangible for the Lord,’ ” he said.

Discussions throughout the morning typically focus on whatever topics people are interested in, but “God typically always gets injected into conversations,” Hatley said.

He does his best to create long-lasting relationships with his congregants, going as far as to provide them with his contact information, if they ever need to reach out.

“We really try to get to know the people beyond just ‘Hey, here is 20 bucks, hopefully this will help you,’ ” he said. “We really want to get into their life and become friends.”

Hatley remembers talking with one individual who told him he had never possessed $1,000 of his own money. Even though Hatley knew this man had trouble with addiction, he said God told him to act, and so Hatley gave the man $1,001. The man ended up using the money to buy a car.

“It’s just one of those things where God knows what he’s doing,” Hatley said. “So I can trust that he is leading.”

Several local churches and residents often volunteer their time helping Hatley pass out food and distributing their own items. Last Sunday, for example, several organizations, including some churches and families, contributed items that were passed out, including gift bags, coats and scarves, Hatley said. One church even cooked breakfast and passed out plates of food alongside the usual breakfast sandwiches.

“It is the spirit of Christmas, it is the spirit of generosity and giving,” Pastor Reese Linnell said about the importance of Hatley’s ministry. “We certainly can’t, by ourselves, solve the challenges of people who need homes in Stanly County, but we can do this.”

Hatley has received more than $140,000 in donations from volunteers and tithing from congregants, which has all gone back to the community in the form of various service projects, including purchasing vehicles for those in need, paying overdue power bills and helping people obtain their driver’s license.

“We seek the Lord and when he shows us a need, we just go for it,” Hatley said, noting he’s found ways to help both congregants and people struggling who might not be familiar with his ministry.

Hatley said he often ends his conversations with a hug, telling his congregants that he loves them — underscoring not just how meaningful the ministry is for those in attendance but also for the one who set it all up.

“I’m not standing on a stage, I’m not getting any accolades, but it’s so beautiful,” Hatley said, noting how proud he is of what the ministry has become and that he plans to continue the service for as long as he is able.

“I would not trade it for the world,” Hatley added. “I just love the relationships that we have built.”