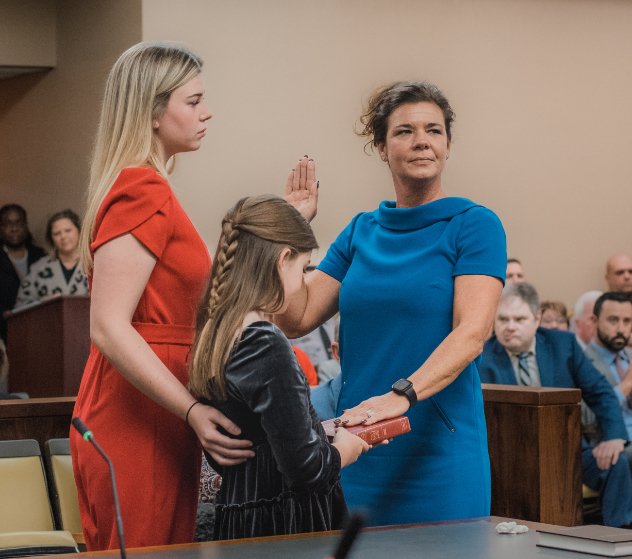 Ginger Efird was sworn in Dec. 8, 2022 as Stanly County's first woman Clerk of Superior Court with daughters Lily Efird and Ivy Efird by her side. Photo courtesy of Jennifer A Steiger, Jennifer Ann Photography.

The last few weeks have been a whirlwind for Ginger Efird.

A crowd of family and friends, law enforcement officers, lawyers, judges and politicians gathered Dec. 8, 2022, to watch as the first woman elected Stanly Clerk of Superior Court took the oath of office.

Looking back on the groundbreaking ceremony, Efird said last week that she is still “relishing in the moment” and “will continue to do so for a long time.”

She appreciated the many people from across the county that were in the courtroom during her ceremony, saying “it shows me how much respect I have earned.”

“I realized that day how many people I have impacted both personally and professionally in a positive way,” she added. 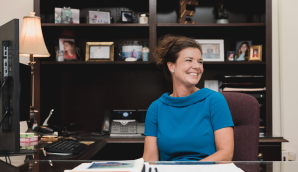 Efird, who is Stanly’s 18th clerk of court, took over for Michael Huneycutt, who served for four terms and was first elected in 2006. His last day on the job was Nov. 30, 2022. In order to replace him, in November Efird defeated Todd Lowder, Stanly County’s chief magistrate, taking home 79% of the electorate with 18,161 votes.

A 2000 graduate of Pfeiffer University, Efird began her career with the Mecklenburg County District Attorney’s Office, where she was a domestic violence legal assistant for five years. She then transferred to Prosecutorial District 20, which included Anson, Richmond, Stanly and Union counties, for District Attorney Michael Parker as a child sex assault and abuse victim/witness legal assistant, according to her website.

Efird was most recently an administrative assistant, a position she held for 14 years, during which time she worked for three district attorneys, including incumbent T. Lynn Clodfelter, who spoke about how Efird was ready to meet the moment with her new position.

“I speak for everyone, when I say, you are where you’re supposed to be and I know you will do a great job,” he said.

In a county where men have historically held onto the reins of political power — and for the most part, still do — Efird is a change maker, just like her mother, Jann Lowder, whom she mentioned in her speech during the ceremony. Lowder was the first woman to serve as chairperson of the Stanly County Board of Commissioners in 2015.

“Mama, I get to join you today,” she said about the significance of her victory, “because you at one time made history in this county. And now we have that in common.”

Efird hoped that her barrier-breaking victory would also provide a source of inspiration for her two daughters, Lily and Ivy.

“To my girls, I want you to know: You can be whatever you want to be and it doesn’t matter that you’re a female,” she told them.

Looking ahead into 2023 and beyond, Efird said she is excited to continue serving Stanly residents in her new position.

“I’m sure in the weeks and months ahead there will be challenging times as I learn all of my new roles as clerk,” she said, “however, I have no doubt that I am prepared and up to the challenges.”