The measure was part of a large Alcoholic Beverage Control bill Gov. Roy Cooper signed into law in September 2021 to help downtown businesses still recovering from the COVID-19 pandemic. Rather than creating a statewide social district, cities and municipalities have the option to pass ordinances creating their own.

These districts, which must be registered with the North Carolina Alcoholic Beverage Commission, must also follow certain rules. Patrons are not allowed to carry their open containers outside the district or take a beverage from one establishment into another. They also cannot bring their own personal beer or wine into the district. Certain businesses within the district can decide to opt out and not participate.

To date, at least 18 social districts have been created across the state, though several more municipalities are considering doing so.

Norwood was the second municipality in North Carolina to go forward with a social district — behind only Kannapolis — when the town council approved creating such a district during its December 2021 meeting.

The new district is in the downtown Norwood area on both sides of Main Street, between Whitley and Pee Dee Avenue, bordered on the northern side by Campbell Street. The district goes down Main Street to include Mr. Tequila’s Mexican Restaurant.

With assistance from the Norwood’s Central Business District, the social district officially opened a few months later, just in time for the town’s Arbor Day festival on April 30. Numerous patrons enjoyed strolling parts of the downtown area with alcoholic beverages in hand.

Numerous businesses in the area have benefited from the district, including Lantern Sushi, the town’s new restaurant specializing in sushi and Asian cuisine which opened in the summer.

During the town’s Christmas on the Square festival, “many patrons could purchase coffee and walk over to the Lantern and with the social district sticker affixed to the container, could buy an alcoholic additive to the festive coffee,” said Town Administrator Scott Howard.

“We have no negative issues with the Social District and as a matter of fact, it has been precipitous in procuring new investors that are exploring starting new businesses in downtown Norwood,” Howard added.

The Albemarle City Council also approved implementing a social district in its downtown a few months later, in June, following two input sessions that were held in April. 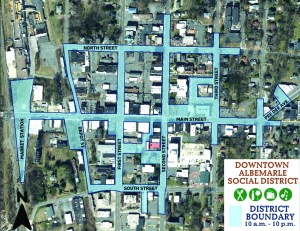 Albemarle’s Downtown Social District covers the area from the Five Points District to the East to Market Station to the West with North Street to the North and South Street to the South as the boundaries. The social district, which began Oct. 29, is in effect each day from 10 a.m. to 10 p.m.

ABC-permitted establishments, including Five Points Public House, Off the Square and Badin Brews, are participating as are 17 other businesses within the designated area, including Starnes-Bramlett Jewelers, Make it Personal, Albemarle Music Store and Uwharrie Dash, according to information from the city’s website regarding social districts.

Since its implementation, the district has been a boon for the downtown economy, according to local business owners.

“Friday and Saturday are the most popular days for customers to take advantage of the social district,” said Joshua Hicks, owner of Badin Brews. “We’ve been getting a mix of new people and regulars enjoying the social district. Once warmer weather arrives, I expect all businesses downtown will benefit greatly from it.”

“The social district has been a fun way to add to the experience at our store,” said Make It Personal owner Mary Wysocki. “It’s been great to see customers walking around, relaxing with a beverage as they shop.”