After more than 30 years, Burris steps away from Rosebriar as new owners take over 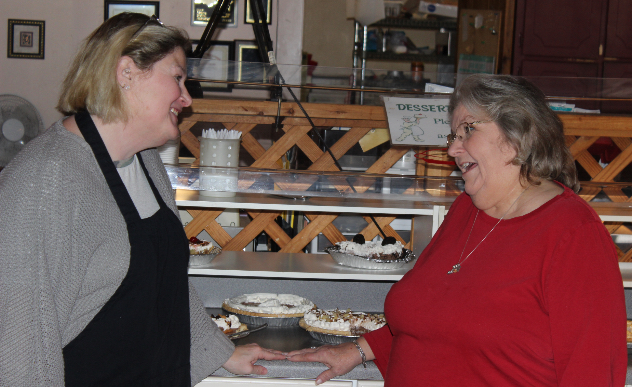 Melissa Eudy, left, has taken over ownership of the Rosebriar Restaurant from Gail Burris, who first opened it in 1987.

During the Christmas break, when many of her Gray Stone Day School colleagues were enjoying time with their families, Melissa Eudy was enrolled in “Pie Academy” at the Rosebriar Restaurant, at 528 Wiscassett St. in Albemarle. She learned to make several pies and even discovered one, the strawberry custard, that she had never tried before but thoroughly enjoyed.

The time was certainly valuable for Eudy, who before her time as an English instructor at Gray Stone, was a teacher at Pfeiffer University and Stanly County Schools. She was transitioning from the world of education into the world of food, more specifically pies, as she was taking over ownership of the Rosebriar from Gail Burris, often known as “pie lady,” who first opened the restaurant more than three decades ago.

“I got to watch the first week and the second week she (Burris) said, ‘Alright it’s your turn,’ ” Eudy said about her training during the holidays.

Burris made the official announcement about her retirement Dec. 20 on her Facebook page. “I will miss all my customers who have become friends and family but…I am blessed beyond measure to turn it over to Melissa and Wes Eudy who will love and cherish it and continue what Alan (her husband) and I built,” she wrote.

Eudy and her husband Wes took over the restaurant on Jan. 3.

Having come to the Rosebriar as a child with her mother, where she enjoyed vegetable lasagna and, of course, the famous pies, Eudy believes there is a natural connection between her former career and her new one.

“So much of teaching is building relationships and that is part of being a good restaurateur — building that rapport with your community,” she said.

But Eudy acknowledges the enormous responsibility that comes from taking over from Burris, who turned her restaurant into an institution for so many people in the area. The restaurant has been featured several times in Our State and Southern Living magazines, most notably for its pies.

“It’s such an honor that she trusts us to continue what she started,” Eudy said, noting while she feels some pressure about taking over, she is confident that Burris has adequately prepared her for the task. “She’s groomed us so well and shown us so much. She’s left us with stock in the fridge, she’s left us with cooks who know what they’re doing and a notebook full of recipes.”

“She has stocked us with what we feel like we need to be successful,” she continued. “We appreciate that more than she probably knows.” 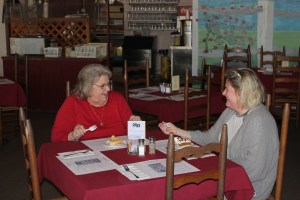 Melissa Eudy, right, took over the Rosebriar Restaurant from Gail Burris on Jan. 3.

Burris has been in the food industry for most of her life. She began her culinary career at 14 working as a waitress at Wink’s in Albemarle. She later spent time at Western Steer steakhouse before pivoting to working at Albemarle High School’s cafeteria for many years.

She got a call in the summer of 1987 that Jabby’s First Edition, a restaurant which had been open for about two years, was for sale and was asked if she was interested in purchasing the building. She declined but was asked again a few months later and accepted after the owners gave her a better price.

In November 1987, Burris bought the restaurant and renamed it Rosebriar. Since then, she has served several generations of patrons, often forming strong relationships which have continued to last.

“Some of my best friends that I ever had, I met in here eating lunch,” she said. “I would not change it for anything in the world.” 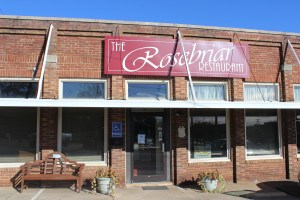 Rosebriar Restaurant has been a fixture in Albemarle since Gail Burris opened it in 1987.

In looking back on her tenure, she credits the restaurant’s success to the fact that she found something that really appealed to people — her pies — and has largely kept it the same. The restaurant averages about 12 to 15 pies in a given day and Burris said over the past 35 years, the restaurant has produced more than half a million pies, which is likely a conservative estimate.

“If you have something that works, you don’t change it up and do a lot of different things,” she said.

And people have come from all over to get a taste of her pies, of which about nine are served each day along with a few rotating specials. Popular flavors include banana split, Almond Joy, coconut cream and strawberry cream.

“People are creatures of habit, especially in this area,” Burris said. “When people are used to something, they want it to stay close to being the same.”

One of the biggest changes people will have to get used to is the fact that Burris will no longer be a constant presence inside the restaurant.

She had been contemplating retirement for the past two years as her mobility has gradually been compromised due to her arthritis. Burris decided she would either sell the business or shut it down altogether if she could not find a buyer.

Eudy first contacted Burris about purchasing the restaurant, which had been a long-term goal of hers, back in September and they created the succession plan for the beginning of 2023.

Eudy recalls driving past the restaurant about three years ago — when she first learned it was for sale — and telling Wes how she wanted to “own that place someday.”

As someone who enjoys baking and loves desserts, taking over from Burris “was kind of up my alley,” she said. 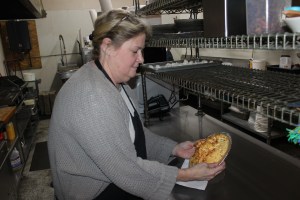 Melissa Eudy prepares one of the Rosebriar’s famous pies.

Deciding she needed to devote herself full-time to running the Rosebriar, Eudy left her almost two-decade career in education.

“That’s why I decided to leave teaching because I cannot grow this from afar,” she said.

As she has been learning the ins and outs of the business, Eudy is grateful to have the support of longtime employees, who have been the lifeblood of the restaurant. They include Mark Isenhour, a 25-year veteran who buses the tables and works the front of the house.

“He’s the hardest worker here,” Wes said. “He is one of the first ones to get here and the last to leave.”

Looking to the future

While the weeks leading up to the transition have been filled with both anticipation and nerves, Eudy is excited not just to continue what Burris started but to also learn more about the restaurant and what it has meant to people.

“I call this place a ‘her’ because I believe she has a spirit and a soul,” Eudy said. She added that due to several factors, including the COVID-19 pandemic, “I think she’s been in kind of a lull and we want to bring her back and revive her.”

Part of this involves finding ways to appeal to a younger demographic and to increase collaboration with the downtown Albemarle community.

While the menu and hours will largely stay the same, there have been a few modest changes. The restaurant now accepts debit and credit cards and the restaurant will be open from 5 p.m. to 8 p.m. on the first Friday of each month, with a percentage of the proceeds going to local organizations, including Stanly County Public Library and Butterfly House Children’s Advocacy Center.

As Burris prepares for retirement, where she is excited to spend more time with her husband and take longer trips to Sunset Beach, she knows her business, which she still calls “my baby,” is in good hands.

“I feel that God put them in my path,” she said about the Eudys taking over. “I think that Melissa has the passion for this…and I think they will do fantastic.”