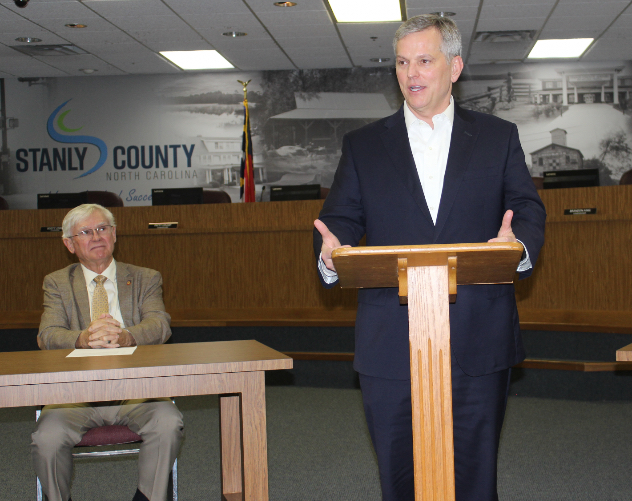 To bring attention to Stanly County’s progress in fighting the ongoing opioid epidemic and share the latest on the ongoing national opioid settlements, N.C. Attorney General Josh Stein was in Albemarle Monday morning to speak with local officials and groups working to alleviate the issue.

“This is a nettlesome problem,” Stein told the crowd at the Stanly County Commons. “We’re actually at the deadliest moment in what is the deadliest drug epidemic in American history.”

While more than 100,000 Americans died of a drug overdose in 2021 and roughly eight North Carolinians die each day from an opioid overdose, tangible progress has been made in Stanly, which only a few years ago, was consistently ranked among the worst counties in the state.

This is largely a result of the county creating a community paramedic program in 2019, one of the first of its kind in North Carolina, to target people suffering from opioid overdoses. The paramedics, who respond exclusively to overdose calls, often administer life-saving medication such as Narcan or Suboxone before patients are taken to the hospital or connected to treatment options such as Monarch, Nazareth Child & Family Connection and Project Lazarus, a local group comprised of public health, health care, law enforcement, mental health personnel and concerned citizens working to combat the epidemic.

Deputy EMS Chief Mike Campbell, who spent several years as a first responder with the Community Paramedic Program, estimates opioid overdoses have decreased about 60% since the community paramedic program was first established in May 2019.

After leading the state in opioid overdoses for much of the past decade, the county has gone more than a year without appearing on the state’s monthly list of top 10 counties with the highest rates of overdoses leading to hospital visits.

Campbell and his colleagues learned several key lessons since implementing the paramedic program, he said, most notably that despite all the progress they have made in helping to save lives, “we can’t do it by ourselves,” and that collaboration with other similar organizations, such as Project Lazarus, has been critical.

“It’s really humbling and really inspiring to be up here to talk about the good things we’ve done in Stanly County over the past three years,” Campbell told the crowd. 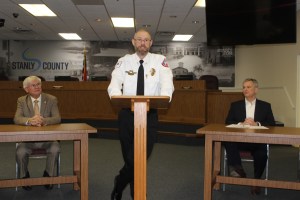 Deputy EMS Chief Mike Campbell, center, spoke about the efforts of the Stanly County Community Paramedic program to help people and save lives.

As part of a national $26 billion opioid settlement reached last year between the country’s three major drug distributors — Cardinal Health, AmerisourceBergen and McKesson — and the pharmaceutical company Johnson & Johnson, which Stein helped broker, North Carolina received $750 million, 85% of which will go to counties and local municipalities.

Stanly County is set to receive roughly $4.7 million over an 18-year period, of which it has already received about $575,000, according to County Manager Andy Lucas. The county is scheduled to receive an additional $312,000 this summer.

About $343,000 will be allocated for at least the next three years to support organizations and strategies that have had success in reducing overdoses within the community, including the paramedic program and Uwharrie Harm Reduction Initiative. Funding will expand addiction treatment for people incarcerated and continue medication-assisted treatment (MAT) through Nazareth Child & Family Connection.

To help connect people from across the state with key resources, former U.S. Rep. Robin Hayes formed a group called Bridge to 100, which aims to connect faith-based rehabilitation centers to grant funding in all 100 North Carolina counties. Several local organizations, including Bridge to Recovery and Will’s Place, are already providers.

“I think this is something that is extremely important,” said Hayes, who was at the event, adding that his nonprofit “does not raise money or charge for our services.”

There is still much to be done, as several people in attendance mentioned the need for additional treatment beds for people struggling with opioid addiction along with the establishment of a detox center in the county.

Lew Davis, executor director for Bridge to Recovery, told the crowd the faith-based addiction resource center has 23 beds at its treatment center in Monroe and is looking to double that number by the end of the year thanks to the construction of two new dorms.

With so many counties already using the funds from the opioid settlement to brainstorm ideas to improve the lives of people struggling with addiction, “I feel incredibly optimistic about where we can drive this crisis,” Stein said.

“And I am certain that there will be more people alive and healthy next year and the year after that than otherwise would have been but for the work that you all are doing here in Stanly County,” Stein added.