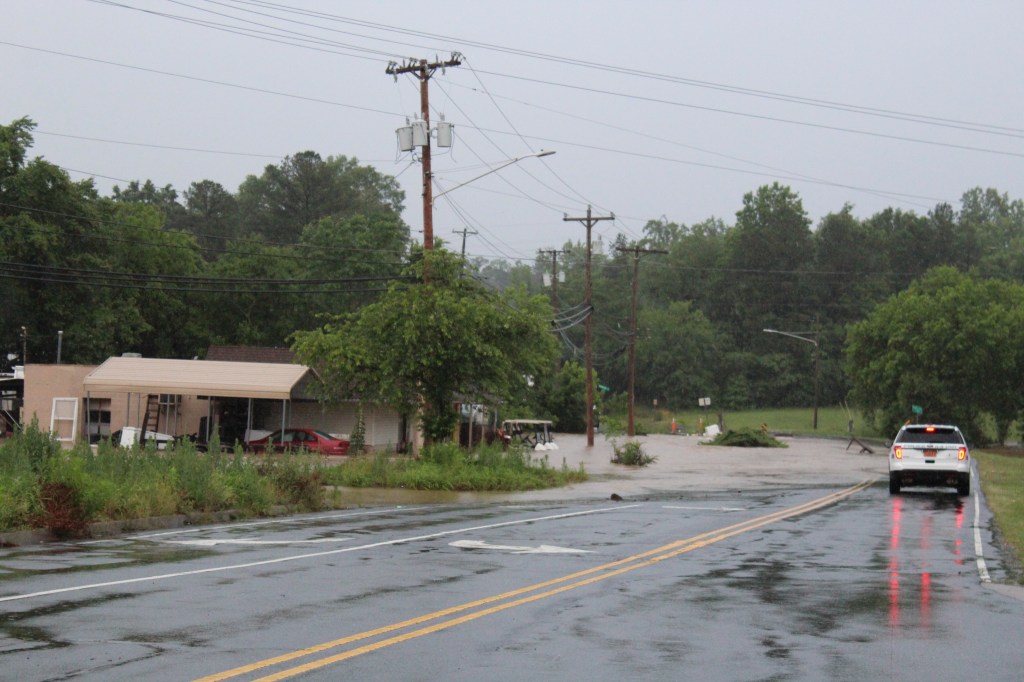 An Albemarle police officer surveys flooding during May 2020.

After nearly two years of public hearings and back and forth with city staff, Albemarle City Council in a 4-3 vote Monday night declined to go forward with the implementation of a stormwater utility program.

The city has been working with Charlotte-based community infrastructure consulting firm WK Dickson since February 2021 about developing a stormwater management program to address residents’ concerns about flooding. The issue was first brought to the city’s attention during a June 2020 council meeting, following historic floods.

Originally proposed in early 2022 to be $11.50 per month, the proposed fee was later reduced to $5.80 per month after several residents expressed concerns about the fee structure during a public input session last summer.

Fees collected by a stormwater utility would be used to pay for aging infrastructure, “reducing the severity, frequency and duration of flooding, clearing debris from streams and pipes, and operations and maintenance of the system,” according to the city’s website.

Currently, 93 municipalities across the state have their own stormwater management plans.

In making a motion to approve the program as presented, Mayor Pro-Tem Martha Sue Hall, reading from prepared remarks, said “that not implementing a plan and taking corrective action is not the responsible thing to do,” adding it was only a matter of time before the state mandates municipalities like Albemarle without stormwater plans create their own.

“What kills me is that this issue is not going to go away,” Hall continued. “Water is going to go somewhere.”

She said while the plan is far from perfect, as there are still questions regarding non-residential and commercial properties after last week’s public hearing, “I am more than ever convinced that we need a stormwater plan.”

To add more complexity to the decision, Albemarle received $250,000 in funding from the Golden LEAF Foundation last fall to assist with a portion of the city’s proposed stormwater management program planning, specifically for a watershed study of Little Long Creek, which would cost $500,000. The grant was contingent on the city having a stormwater program in place.

The council did agree to hold a stormwater planning session on Jan. 30 to come up with next steps on a proposal.

Bramlett, who was on the council when residents first approached it about flooding concerns in 2020, was concerned that the city had spent about $600,000 as part of its contract with WK Dickson. He inquired about whether the city could hire its own civil engineer to help address the flooding issues.

“There is no way on Earth I could vote to implement this proposal,” Bramlett said, noting that the fee in his mind was a tax.

Townsend was concerned with how much money small businesses and churches would have to pay each month if the stormwater program was approved.

While residents would pay the flat rate of $5.80, non-residential properties would be billed based on dividing the total impervious surface of the property by the Equivalent Residential Unit (determined to be 3,270 square feet) and multiplying that amount by $5.80.

So, for example, if a local business had about 9,300 square feet of impervious surface, that would be roughly three ERUs (9,300 divided by 3,270). When multiplied by the new monthly rate of $5.80, the business would pay about $16 per month.

“In the end, the cost will be passed on to the consumers,” Townsend said, noting that during a time of high inflation, he was not comfortable approving of the program.

Aldridge said that while he agrees that something has to be done to address the flooding issues, there are still many “unanswered questions” with regards to the proposed stormwater plan. He noted that he thinks more work could be completed in-house, in terms of cleaning up creeks and streams.

For the members who supported Hall’s motion, while they acknowledged that the fee would be a burden for residents and businesses, problems would continue to occur every time there is a major storm, especially for people living in the flood-prone areas of the city.

“My thoughts keep coming back to the fact that I don’t want to pay another fee and I don’t want my church to pay a fee, but what will we tell those people the next time a storm comes and they are flooded?” Whitley said. “What will we say to them?”

As a business owner who would be paying a large monthly fee if the program were adopted, Dry said he understands people’s frustrations but the council has a responsibility to help its citizens, whenever an issue is presented to them.

“This problem is not going to go away today, tomorrow or next week, next year, 10 years from now, unless we decide to make a decision and there’s never going to be an easy time to do it,” Dry said.

“I feel it’s time that we have to take a stand and show this community, ‘Yes we listen.’ It’s a hard decision to make, but it’s the right decision to make long-term,” Dry added.

Hall said the council had been elected to “find solutions to this issue.” She asked her fellow council members to come up with some sort of direction the city could take going forward in terms of how to mitigate the impact of flooding.

Townsend said while some sort of resolution to the problem would not be finalized during the council meeting, the members would “do something, but we want to do the right thing that is fair to everybody at the right time.”