A group of West Stanly High School students are making a positive change in their community thanks to a creative idea they came up with.

As part of the Make a Difference project in their earth and environmental science class, where students have to identify and research an environmental problem and then create some sort of solution, ninth graders Mali Love, McKinley Wilhelm and Mercedes Aleman decided to tackle the problem of plastic pollution.

“I thought that was a pretty big project to do because only 9% of plastic across the country is actually recycled,” Love said.

Since the project began last month, the students have been working with the Stanly County Family YMCA to help make people more cognizant about the importance of properly throwing away plastic bottles and other recyclable materials.

The students created posters with recycling facts that have been placed around the YMCA and set up a container for people to dispose of their recycled items. Twice a week, Love’s grandmother has picked up the recycling and Love has organized the bags in their carport. The plan is to take the bags to the Concord recycling center once the project is completed this week. 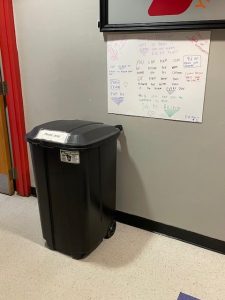 The container at the YMCA where people have been encouraged to recycle plastic bottles. Photo courtesy of Cameron Potts. 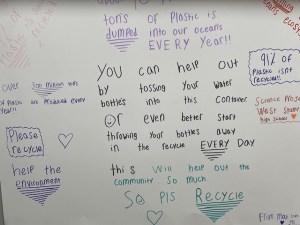 One of the posters at the YMCA encouraging people to recycle. Photo courtesy of Cameron Potts.

“The Y is very happy to help these young people with this positive project,” YMCA CEO George Crooker said.

While Love has been handling the recycling from the YMCA, Wilhelm and Aleman have been busy researching facts and statistics about the importance of recycling.

Here are a few facts the group discovered:

“I’m immensely proud of them for doing this,” said science teacher Cameron Potts. “I just provided the opportunity and the idea and they took it and made it a reality…I’ve really been inspired to see how passionate they’ve grown about it and how proud they are to come tell me about the progress on it every day.”

Through Love’s ongoing discussions with Crooker, the Y is looking into ways to continue promoting the importance of recycling that she and her classmates started.

“They have shown us it (recycling) can be done, so we need to find out our own way of doing it,” Crooker said.

“It’s pretty cool that we helped out and have made a difference,” Love said.