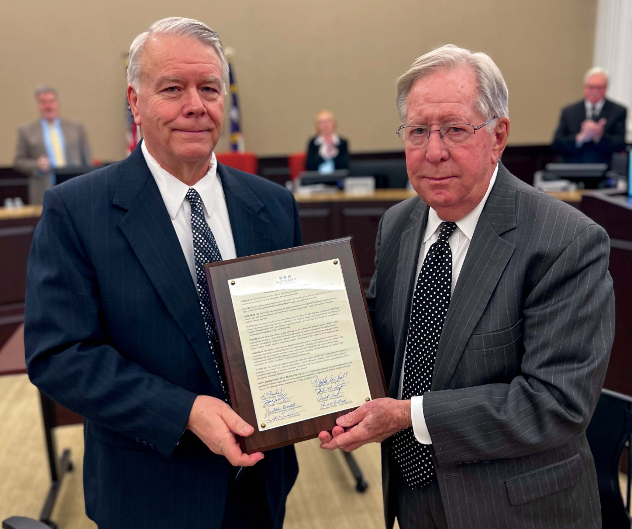 Charles Brown was at a rare loss of words Monday night during the Albemarle City Council meeting.

Thinking his presence was required to accept a proclamation of appreciation for the Golden LEAF Foundation, a nonprofit organization of which he sits on the board of directors, he soon discovered that as a result of his decades of service to his hometown, he was the featured attraction.

“I’m speechless and that doesn’t happen very often to a country lawyer, but I’m speechless tonight,” Brown said, sitting next to Mayor Ronnie Michael at the front of the room.

As a board member with the Golden Leaf Foundation, Brown has helped secure funding for numerous city and county projects including support for Pfeiffer University’s Physician Assistant program; a new drinking water interconnection and a pump station for Stanly County and the City of Albemarle; and infrastructure at Charlotte Pipe and Foundry.

He has also been a lifelong member of First Lutheran Church, where he has taught Sunday school and served multiple terms on the congregational council including as president.

He received his B.S. in Business Administration and his Juris Doctor degree from the University of North Carolina at Chapel Hill before before practicing law in downtown Albemarle with his older brother Lane and father Richard Lane Brown Jr.

Several council members spoke about what Brown has meant to the them and the city.

“You’ve been a loyal friend, an advocate for our county and your family has been a part of everybody in this county for well over 100 years,” said Benton Dry. “Don’t go anywhere because we still need you.”

“For the years, I’ve always heard people say that Charles is the man, but now tonight, I know why they say you are the man,” said Dexter Townsend.

In brief remarks, Brown, who joked that he was not prepared to be honored, thanked the council for recognizing the Golden LEAF Foundation and said he was “the beneficiary of many wonderful relationships.”