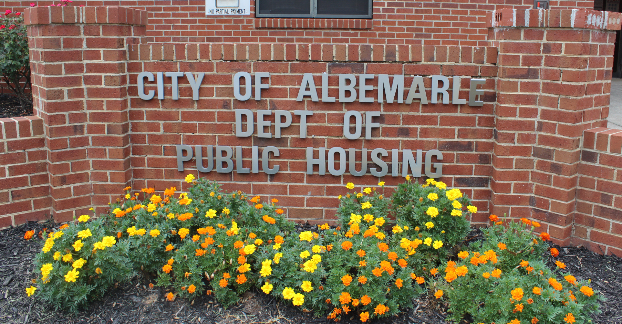 The waiting list for people to apply for Section 8 housing, which is under the umbrella of Albemarle's Department of Public Housing, will reopen on Oct. 17.

The Albemarle City Council on Monday night approved recommendations from Stogner Architecture to select Charlotte-based One Source Environmental, LLC  to perform asbestos and lead-based paint testing for the Amhurst Garden apartment units that will be included in the upcoming sewer rehabilitation project.

It will cost about $5,980 for the asbestos treatment and $6,980 for the lead-based paint treatment, according to Stogner’s letter of recommendation sent to City Manager Michael Ferris and Public Housing Director Dr. Kim Scott. The council also received copies of the three-page letter, as did The Stanly News & Press.

Before the sewer project to improve the damaged Amhurst Garden apartments can begin, testing for asbestos and lead-based paint must take place.

Seven apartment units will be tested for asbestos and lead-based paint and will be part of the sewer project, Scott told the council. They are 1509 Inger, 1507 Inger, 1446 Inger, 413 Griggs, 411 Griggs, 409 Griggs and 407 Griggs. These units will be fully vacant as of the beginning of next week, Scott said.

“There won’t be any interference with the process of the abatement and/or the testing,” he said.

The Request for Proposals was sent to six firms in the area that could perform the testing and three proposals were received. The other two firms were Summit Engineering Laboratory and Testing, Inc. and The EI Group, Inc., both of Charlotte.

One Source Environmental submitted the lowest bid for both asbestos testing and lead-based testing. The firm plans to test a representative sample of units, 175, as opposed to testing all 200. The testing should begin in mid-February.

Stogner recommends the city perform comprehensive (multi-surface) testing that is representative of all units at both of Albemarle’s housing sites, even those not impacted by the sewage issue.

“Although it will cost more now, it will save the City from the need to do additional testing before future public housing renovation projects,” Stogner wrote.

The money to pay One Source Environmental for testing the units will come from public housing capital funds, Scott told council.

Twenty-two units in the public housing community have been identified as having plumbing problems and will be improved, provided there is enough funding. The total represents approximately 25 to 30 families, Scott told The Stanly News & Press last year, about 15% of the 150 units in Amhurst Gardens.