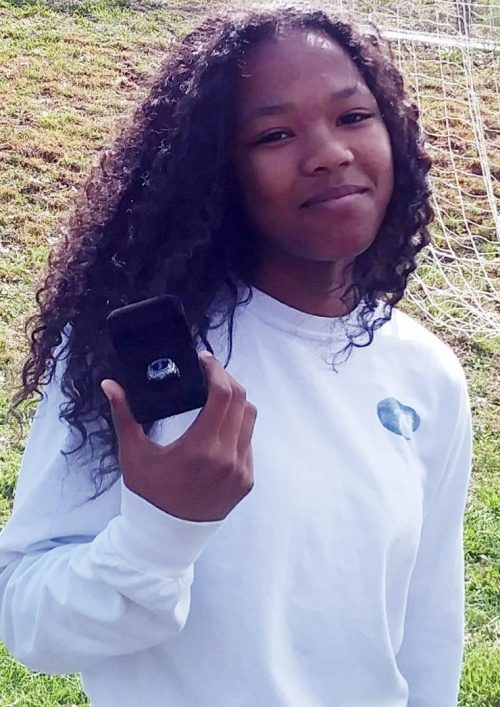 When she won the 300-meter hurdles as a freshman last season, Albemarle’s Taniqua Knight was new on the high school track scene.

Winning that title, however, added a little pressure this year for the sophomore as the track season opened. However, Knight continued to meet those higher expectations and went on to repeat in the same event at this year’s 1A state meet at North Carolina A&T.

Knight posted a time of 46.47 seconds in the 300-meter hurdles, a time good enough to qualify for the MileSplit US Second Team. MileSplit is a website which keeps up with cross-country and track results throughout the country.

She took first place over Princeton’s Shamonda Bell by .14 seconds, while her teammate, freshman Somajhe Porter, finished sixth with a 49.13.

Knight also ran in the 100-meter hurdles at the state meet, finishing seventh in 17.31 seconds. Bell took first in that event with a 15.43.

Knight and Porter, along with Armanie Sellers and Kadajah Little, took fourth in the 4×200 relay at state with a 1:50.94.

“I had more competition; my head was boosted,” Knight said regarding her win as a freshman. “I wasn’t really trying my hardest; (winning) gave me a push.”

Knight said the 300-meter hurdles fits her, saying, “I’m just hyper. I have a lot of energy but I’m lazy.”

The format of the hurdles, with more time in between each, gives her more time to sprint, which is an advantage in the race, she explained.

“I love the curve,” Knight said of the part of the race when it goes around the ends of the track. “It fits me; I just catch the wind.”

“She catches momentum just like our male hurdler, Timothy (Ridenhour),” said Albemarle head women’s track coach Carla Ross. “They have a different lean about themselves when they come into that curve. You can see them pull away from other kids. Once in the straightaway, it’s a done deal.”

Her coaches had equally high expectations this season, while new men’s track coach Bernard Henry was helpful for her as well, Knight said.

“He bettered my form, helped me a lot. The drills we did. We have to walk with our hands in a certain form; it was way more then we did last year. He pushed us way harder,” Knight said. “We had a good season.”

Ross said her win as a freshman was not a surprise to her, even though she said it might have been to Knight.

Ross said Knight and her ability intimidates other athletes and makes them skittish to run against her.

She said other athletes know who the best are, which is something she tried to express to Knight and her teammates.

“I told them, ‘You guys are great athletes.’ But I don’t really think they realize it yet…you could go and write your ticket to anywhere. They are raw material that can be converted into great runners, great sprinters,” Ross said.

Ross is also fielding a number of calls regarding Knight and her teammates, from college coaches wanting to see film on her athletes.

“You have to master one event, like the 300-meter hurdles (for Knight),” Ross said. “If I can get rid of her laziness…there is no telling what she‘ll be able to do.”

Knight has her academics in order, Ross said, something else schools are looking for in potential student-athletes.

Albemarle started this season with 11 members on the women’s track squad, nine of which were either sprinters or on relay teams.

“We had eight girls that won first or third all season long (as a team),” Ross said. “That’s something to be proud of be. You look at the stats, they are the same girls running those events.”

Knight said she and her teammates felt a responsbility to help the team, saying “I like being maxed out. I like running those events.”

Ross said interest for the team continued to build as the team’s successes grew last season and she hopes to have a bigger team next year who may be able to take a shot at a state championship.