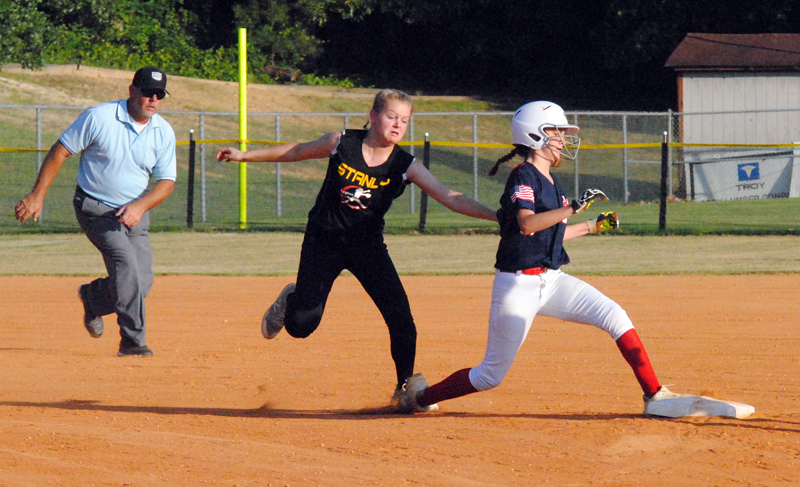 Having originally been scheduled as a home game, the two teams decided to switch dates, meaning Montgomery will visit Stanly on June 26.

As for Thursday’s games, Stanly led in both, but Montgomery bounced back in both to improve to 3-1 on the season. Stanly dropped to 0-4 with losses of 2-1 and 10-9.

Stanly took advantage of an early error to take an initial lead and had chances midway through the game to rally, losing the opening game by one run, 2-1.

Brooklyn Callicutt earned the win on the mound for Montgomery while Allie Glover took the loss for Stanly.

Tia Lunsford singled to shortstop with one out in the top of the first. She later scored on a fielding error, putting the visitors up 1-0. 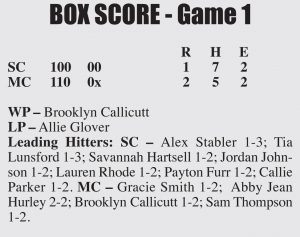 Post 159 tied the game in the bottom of the first inning with a single run. Abbie Yarboro walked on four straight pitches, stole second and scored on a Gracie Smith single to left.

Montgomery took the lead for good in the bottom of the second. Abby Jean Hurley singled to left and scored on a Sam Thompson RBI single to left, putting the hosts up 2-1.

Stanly had chances in the third and fourth innings to score, getting two runners on each time. In both frames, runners were thrown out trying to advance to third base.

In the bottom of the fourth, Stanly pitched out of a bases-loaded jam and did not allow a run to keep the game close. However, Stanly went in order in the top of the fifth to end the game.

As night fell on the softball field at Lowe Warner Park in Troy and temperatures dropped, the offenses heated up in the second game. 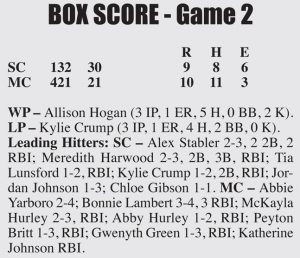 The lead changed hands or the game was tied nine times. McKayla Hurley provided the last-inning heroics for Montgomery with a walk-off RBI single to give Montgomery a 10-9 win.

The offensive fireworks started immediately for Stanly with Alex Stabler leading off with a double to left. Tia Lunsford drove her in with a single to put Stanly up 1-0.

Montgomery tied the game in the bottom of the first, scoring on a two-out RBI fielder’s choice from Bonnie Lambert. She finished the game with three hits and three RBIs.

Later in the first, a Stanly fielding error gave Montgomery the lead. The hosts added a run in the first on a bases-loaded RBI single by Payton Britt and another when Gwenyth Green was hit by a pitch with the bases loaded.

Stanly took advantage of two walks and a wild pitch to score three times in the second to tie the game, 4-4. Stabler scored Lauren Rhode and Callie Parker with a double, then scored herself later on a wild pitch.

Montgomery answered with a pair of runs in the bottom of the second. Gracie Smith delivered an RBI single up the middle, then scored when Lambert doubled to left.

Crump, who took over on the mound in the second inning for Stanly, helped her own cause in the top of the third. After Meredith Harwood led off with a triple, Crump doubled to center field. She later scored on a groundout when the first baseman threw behind her at third and the ball got away, tying the game 6-6.

Lambert delivered again for Montgomery in the bottom of the third with a two-out RBI single to center scoring Katherine Johnson, again putting the home team up 7-6.

Stanly retook the lead in the fourth inning with three runs using small ball. Pinch hitter Chloe Gibson singled to third, but was thrown out at second when Madison Brower reached on a fielder’s choice. Brower advanced to third when Stabler reached on an error, then both scored on the next play. Lunsford put a bunt down and the throw to first went wild, scoring Brower and Stabler to put Stanly up 8-7.

Harwood then doubled Lunsford home with two outs to give Stanly its biggest lead of the night, 9-7.

Abbie Hurley homered to lead off the fourth inning for Montgomery, then two errors and a RBI groundout tied the game yet again, 9-9.

The only scoreless inning in the second game of the twinbill came in the top of the fifth. Jordan Johnson led off with a single but did not advance past first base.

Montgomery’s final-inning rally started with a fielding error and a Lambert single, putting runners on the corners. Stanly switched pitchers to Allie Glover, whose second pitch was sent into left by Hurley to end the game.

“I told them that their growth as a team, and the experience they got Tuesday night, they applied here,” Stanly head coach Rod Orick said. “They attacked the pitcher, the pitches they could get, and the biggest thing they did not do on Tuesday is handle the things they could control: fielding, throws.”

Orick added, “For a very young team, we gave Montgomery County all they wanted.”

Stanly’s home opener of the 2018 season is at 7 tonight as the locals host Western Randolph.