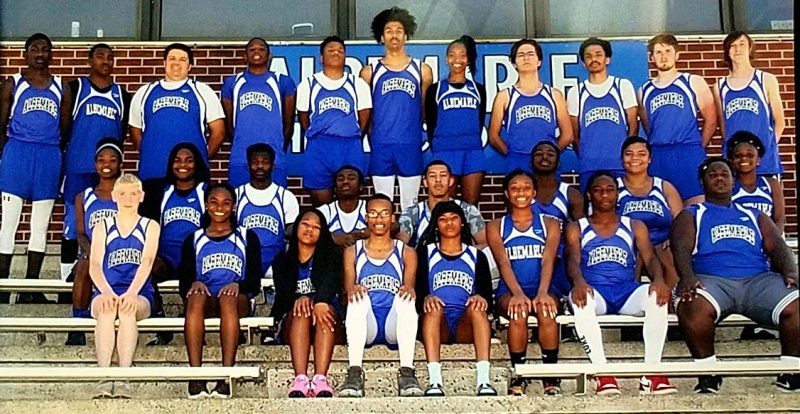 The Albemarle men’s track team wrapped up a successful 2018 season with its efforts at the 1A state championship meet.

After having won the Yadkin Valley Conference championship and finishing first in the 1A Midwest Regional, the Bulldogs finished tied for second place at the state meet at North Carolina A&T’s Irwin Belk Track in Greensboro.

Albemarle entered the state meet having won the YVC championship. On that day at North Stanly, the Bulldogs netted 182 team points, besting South Davidson by 88 points for the title.

Then at the 1A regional hosted by North Stokes, the Bulldogs finished with 96 team points, topping the Community School of Davidson by 24 points for the championship.

The Bulldogs finished with 38 team points, tied with John A. Holmes for first place. Polk County claimed the 1A state title with 44 points.

Head coach Bernard Henry talked about the Bulldogs’ season, saying the team’s mindset was for the six seniors to improve on last year, when the team finished fourth in the state in the 1A 4×400-meter relay.

“Everything seems individual, but it ties together as a team…the seniors led everything,” Henry said. He added the focus was to get the athletes to understand “running every single event helps the team more than ever. I don’t care if you come in last, let’s get points.”

Henry said his approach to coaching track is to emphasize the relationship between the mind and the body while competing.

“Track is a physical sport, but is more tasking on the legs and the minds. You must have them both on the same page,” Henry said.

This season, Henry said the team worked more drills, which came from his time running track at Anson Senior. A Class of 1996 grad, Henry qualified for the state meet in the 100- and 200-meter dashes his sophomore and junior seasons while also running the 4×100 meter relay at state as a sophomore.

“The biggest things coaches did for me was to get me to buy into the drills,” Henry said. “Quick feet drills, getting out of the blocks, any drills you can learn you tend to take that and bring it along.”

Henry, a part of the school’s strength and conditioning program, also worked on the athletes’ form in running and walking while taking full-length strides.

The Albemarle coach encouraged his athletes to represent both the school and Stanly County well by being friendly with other competitors, saying “in the end, we want to be friends. We are competing, but it’s a community.”

Albemarle, like many smaller schools, he said, relies on multi-sport athletes to compete in track, using the example of Josh and Julius Smith as well as many others who competed for the Bulldogs in other sports.

“A lot of the freshmen bought into the idea of team first, team before me. I just enjoyed this year; God willing, I’ll enjoy next year if they come back. For a guy in his 40s, to have kids look to him is special,” Henry said.

Getting more participation in track, Henry said, will help all of the school’s programs.

“With track, you have the high and long jump for basketball, while you gain strength if you throw that discus, which can help baseball,” Henry said. “Hopefully, track will bring up the numbers and add interest. Some may think they are too small to play football or basketball. In track, you just have to be able to run.”

The Bulldogs were heavy on sprinters this season, something Henry hopes to improve on next season, but he said the field and sprint events “changed a lot for us. If you don’t come in first, you’re still helping (the team) out.”

The goal next year is a state championship for Albemarle, Henry said, whether in the team or individual ranks.

Henry added he hopes the track team’s successes “gets our name out there more, that we have some great athletes in track.”

He added, “Albemarle is back; we are back.”

Individually, Gray Stone senior Jason Reynolds earned the school a state championship with his throw of 49-7 in the shot put.

Gray Stone finished 24th with 10 points while North also had a competitor on the men’s side in the shot put place ninth in the event.

Below are the results from athletes representing schools in Stanly County.