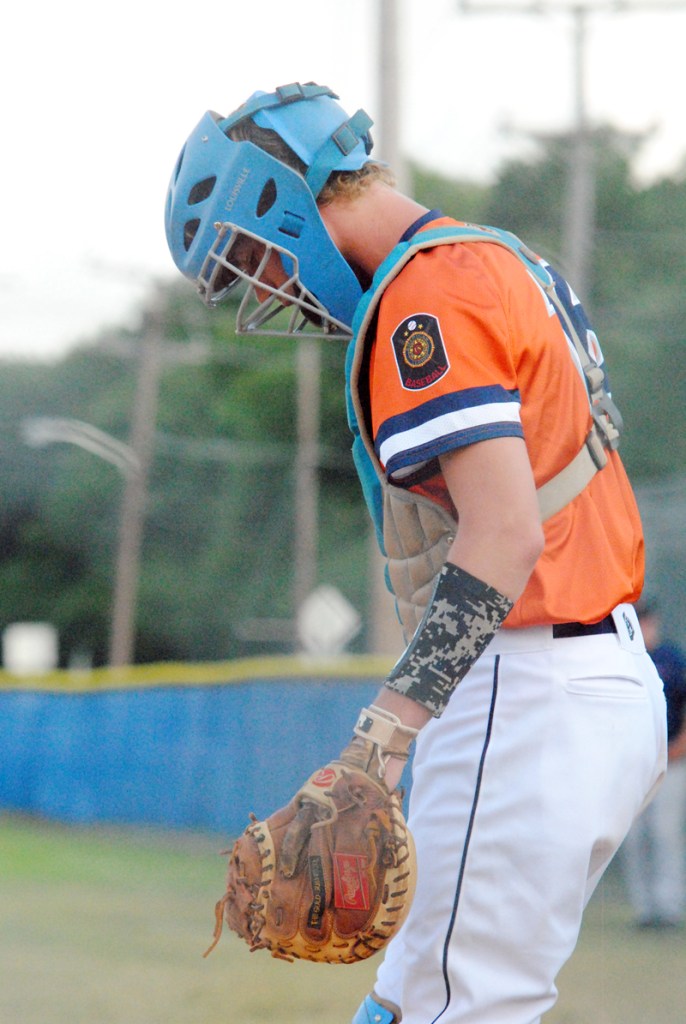 (Contributed) Post 76 catcher Hunter Sells had five RBIs in Tuesday's home win over Concord, including a go-ahead three-run home run in the bottom of the sixth inning.

Stanly’s Hunter Sells, who had two in the 2018 high school season for North Stanly, added long ball number three to lift Post 76 to an 8-6 win over Concord.

On the mound, Tyler Captain won in relief for Post 76 (6-10, 2-2 div.), not allowing a run on one hit in two innings of work. Captain took over for starter Jordan Howard in the fifth inning. Howard allowed four earned runs on seven hits with five walks and three strikeouts.

Jamie Thomas allowed one hit in the top of the seventh inning but earned the save for Stanly. 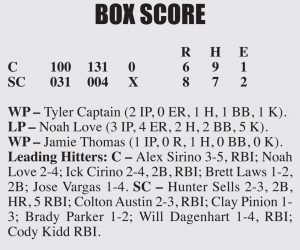 Noah Love took the loss in relief for Concord (7-8, 1-4). Both he and starter Brett Laws pitched three innings; each gave up four earned runs.

Concord manufactured a run in the top of the first inning after a leadoff single from Alex Cirino. After Cirino reached second on a passed ball, Jose Vargas bunted him to third. He scored when Nolan Devos grounded out to third, putting the visitors up 1-0.

Stanly rallied to take a 3-1 lead with three runs in the bottom of the second. Colton Austin singled and reached third on a Brady Parker infield single. Both scored when Sells sent a line drive just fair past the Concord third baseman into the left-field corner.

“In practice, we have been working on situational hitting. I knew when I got up there I had to do something,” Sells said. “I was trying to make solid contact.”

Post 76 added a run in the third after Clay Pinon led off with a single to left. Pinion stole second, then tagged up to third on a fly out. He scored when Cody Kidd sent a pop fly over the heads of the drawn-in infield into short right field. Love made the play, but Pinion tagged up and scored, stretching Stanly’s lead to 4-1.

Alex Cirino got that run back in the top of the fourth with an RBI single, then Concord took the lead back an inning later. A single and two walks loaded the bases, forcing Stanly skipper Jordan Sells to switch to Captain on the mound.

Captain struck out the first batter but the next, Josh Topper, made it a one-run game with a sacrifice fly to left. Ick Cirino then put Post 51 up with a hard ground ball into left, scoring Brett Laws and McConnor Wallace to give Concord the 5-4 lead.

Wallace added a run in the top of the sixth with an RBI fielder’s choice with the bases loaded, but the next batter grounded out, leaving Concord’s lead at two runs.

A leadoff walk to Lukas Scott came to haunt Concord when Scott scored with one out on an Austin RBI single to right. Parker walked, bringing Sells up to the plate.

As the Concord coach strolled to the mound to talk to Love, Sells came over and talked to his coach.

“Coach said, ‘Take your time and find your pitch.’ The first pitch was there,” Sells said.

Sells took the first pitch he saw, a fastball, over the fence in center field for a three-run blast, putting Stanly up for good.

Talking about the win, Hunter Sells said, “It’s a big momentum booster, getting the (divisional) record back to .500.”

Head coach Jordan Sells talked about the team’s approach at the plate, saying, “It’s something we have been trying to work on, having competitive at-bats and putting the ball in play in situations where we need to.”

Sells said the team has worked on “understanding situational baseball…not hoping you get a hit every time. It’s good to get a hit…but it’s not practical. Every now and then, you have to move a runner up.”

Regarding Hunter’s night, Coach Sells said, “We have been looking for that from him. He’s been struggling a little bit, but it was really good to see him come out of his shell.” He added that Stanly’s catcher was sitting “dead-red on a fastball and connected” in regards to the home run.

Post 76 has six games left in the regular season, all Southern Divisional matchups, including a two-game road trip. Stanly travels to Mooresville (2-8, 0-3) on Thursday and Rowan County (15-5, 2-1) on Saturday.

“(The win) means a lot. It’s something to get really excited about. It’s been a long time since we’ve been able to put together some good at-bats and fight back in a game.”