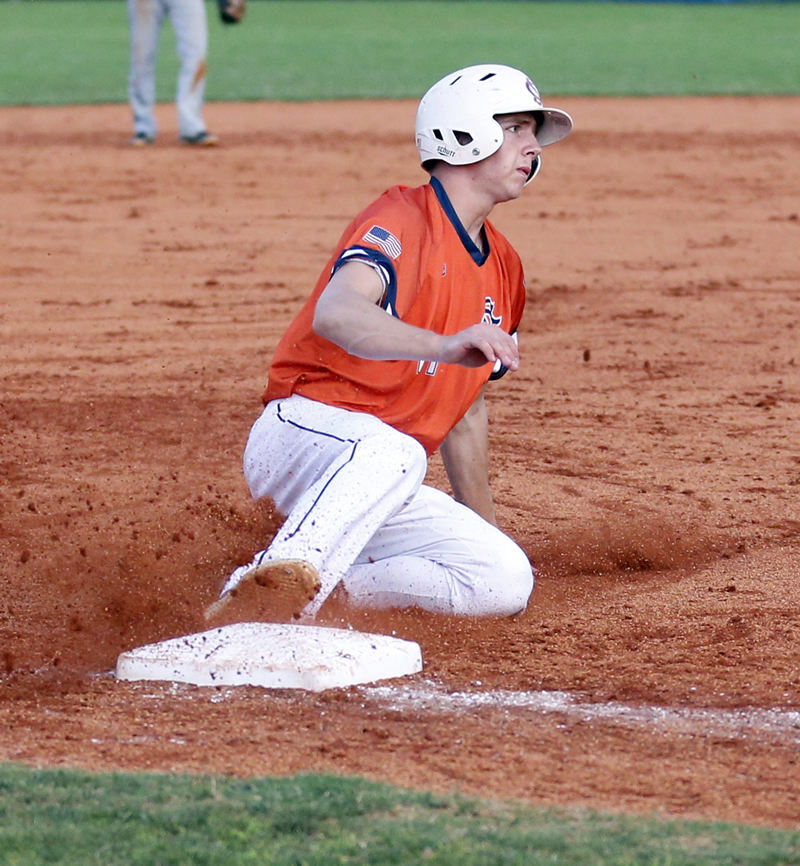 Seth Grice slides safely into third base in a home game earlier this season against Kannapolis. The two teams met in a league game Saturday.

Stanly hosted Kannapolis Post 115 after the two teams split non-divisional games earlier in the season. Post 76 topped Post 115 by a 7-2 margin on May 23 only to lose three days later on the road at Northwest Cabarrus High School 6-1. 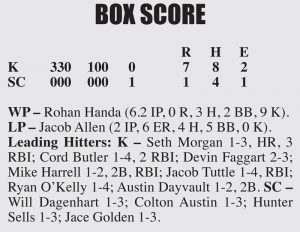 Rohan Handa nearly went the distance on the mound for Kannapolis (5-4, 1-0 Southern Div.). He faced all but three of Stanly’s batters in the game, striking out nine and giving up three hits.

Jacob Allen took the loss for Stanly (5-10, 1-2), one of four pitchers Post 76 used in the game. A.D. McRae struck out three in two innings of work and did not allow an earned run, while Jamie Thomas and Ryan Baucom combined to pitch three scoreless innings with no walks and three strikeouts.

Kannapolis jumped out quickly, taking advantage of early control problems for Allen. After hitting the first batter, who was caught stealing, Allen walked the bases loaded. Jacob Tuttle grounded out to first to score one run, then two more scored when Cord Butler singled up the middle, putting Kannapolis up 3-0.

Stanly managed just two runners in scoring position in the first six innings, including Hunter Sells in the top of the second. He singled then reached second on an error but the next batter grounded out.

The other Post 76 runner to get past first came in the bottom of the sixth. Kolby Lamp walked and reached second on a wild pitch but got no further.

With two outs in the last of the seventh, Stanly ended the shutout bid for Kannapolis. Colton Austin singled to lead off the inning. After two strikeouts, he scored on a Jace Golden RBI double to center off reliever Tuttle. After Will Dagenhart was hit by a pitch, the next batter popped out to first to end the game.

Stanly is scheduled to travel to Mooresville on Thursday. Post 76 is on the road Saturday at Rowan County.