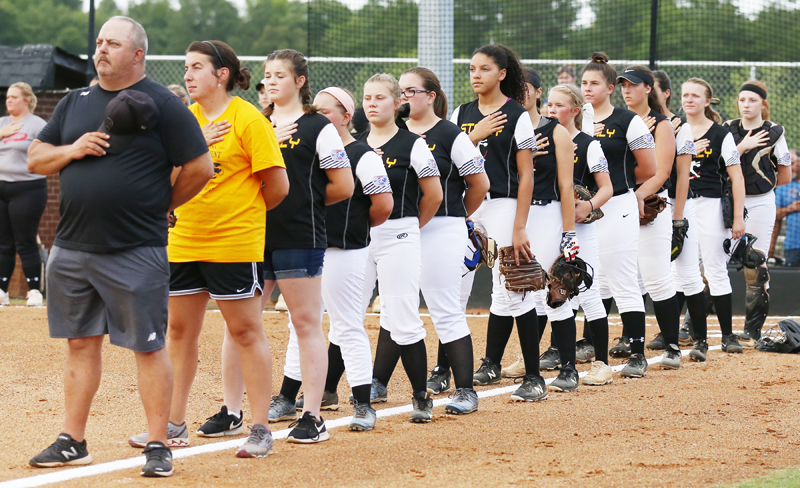 The 2018 Stanly County Lady Legion softball team pays respect during the playing of the national anthem.

Stanly falls to 0-6 with losses

The first inning of games this season has been a struggle for Stanly, including the first game of Tuesday’s twinbill.

Western Randolph scored two early runs in the first inning and went on to win by the same margin.

Four hits in the top of the first off starter Alex Stabler led to the only two runs in the game.

Jordan Johnson had the first of three hits in the game for Stanly, a two-out single in the bottom of the first. The next batter popped out to short.

Ryanne Starnes singled with one out in the bottom of the third for Stanly and reached second when her sister, Karley Starnes, reached on an error. A fly out to left ended the scoring threat.

Johnson reached scoring position in the bottom of the fourth on an error but could not score.

Stanly’s lone extra-base hit of the game came with one out in the bottom of the fifth when Glover doubled. Two groundouts ended the game.

Hunter Helms was the only base runner for Stanly in the game, drawing a two-out walk in the bottom of the second.

Four of Western Randolph’s 12 hits in the game went for extra bases, including two doubles and two home runs.

Western Randolph sent 15 batters to the plate in a 10-run first inning, getting four hits and taking advantage of four Stanly errors.