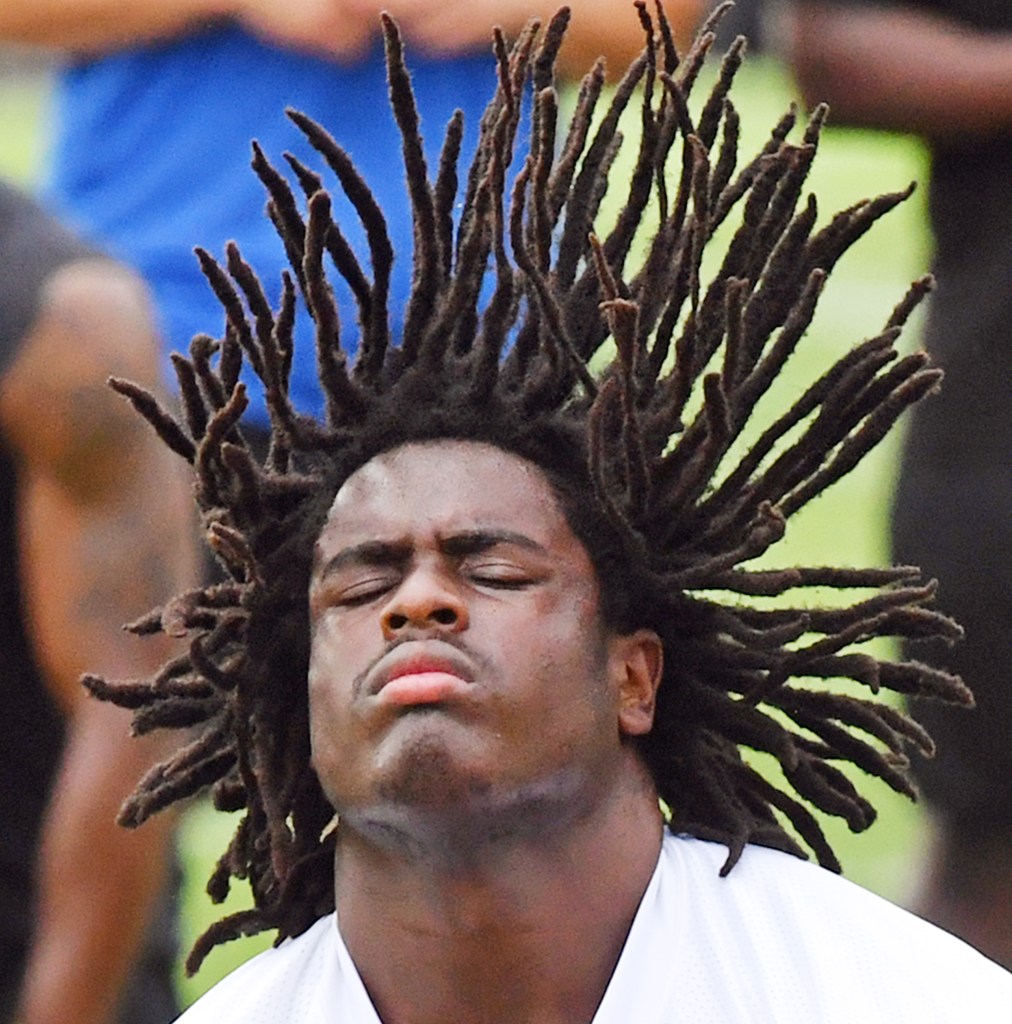 (Courtesy of Pittsburgh Post-Gazette) Pittsburgh Steelers R.J. Prince flips his hair back during warmups at OTA workouts Wednesday, May 30, 2018, at the UPMC Rooney Sports Complex, Pittsburgh.

He was a member of the last high school football team from Stanly County to win a state championship when the Albemarle Bulldogs claimed the 2010 1-AA title.

After four years at the top level of college football, R.J. Prince’s professional career is underway after signing this summer with the NFL’s Pittsburgh Steelers.

The former North Carolina Tar Heel offensive lineman signed with the Steelers after participating in a Pittsburgh minicamp.

“With the winning culture around here, I’m excited. I thank the Lord first and foremost for the opportunity. I’m here and I can play at this level; I only need a shot,” Prince said.

In high school, Prince was a member of the All-SNAP team, a Prep Star All-American and was named to the NCPreps.com All-State team. He also competed in the Offense-Defense All-American Bowl and the Shrine Bowl. As a sophomore, he and the Bulldogs claimed the 2010 1-AA title with a 21-7 win over Pender County.

In his time at Carolina, Prince went from a punt protector and reserve tackle his sophomore year to starting 12 games at right guard as a junior. He also started 11 of 12 games at guard his senior season.

Prince said he learned a great deal playing at Carolina, including “how to properly prepare for a game. Each day, you have to put your best foot forward and be prepared to the fullest. On the field, you have to practice each day like it’s your last practice, give it all you have in the weight room and the film room.”

Referring to his Tar Heel teammates, Prince said “it’s good to have teammates around you who are your friends. You can count on them…you need to be able to trust them on a level and always know they have your back. It was good to make friends at Carolina; I’ll always have connection with them as long as I live.”

From the Tar Heels to the Steelers

During the 2018 NFL Draft, Prince said his agent felt he might be picked between the fifth and seventh rounds. He had previously worked out with other teams including the Carolina Panthers.

When he did not get drafted, Prince said he said to himself, “Oh, c’mon,” but added he had to get over it because it was not the end of his story.

He used Miami Dolphins wide receiver Danny Amendola as an example of what can happen with a player who does not get drafted. Amendola signed with Dallas in 2008 and was a member of the practice squad for the Cowboys. Eventually, Amendola joined the active roster for St. Louis in 2009 and went on to win two Super Bowl rings for New England.

“Amendola talked about his process after being undrafted, saying you have to get over it. If you feel sorry for yourself, your chances won’t be as good,” Prince said.

Knowing he had more opportunities in front of him, Prince had a mini-tryout with the Green Bay Packers. He said Packers head coach Mike McCarthy was impressed with him, but the team did not have a spot for him.

His next shot was with Pittsburgh, where he was eventually signed.

During recent summer workouts, or OTAs, Prince said he worked with the second team mostly while getting a little time with the first team.

“(The draft) didn’t go the way I wanted, but my foot is in the door. I will stay here,” Prince said.

Every practice, Prince said, he takes the approach he did at UNC, saying he tries to move forward at all times.

“It’s about making a statement at each and every practice, every series,” Prince said.

“When you think of the Steelers, when you come to play, you are not just playing us; you’re playing the entire city of Pittsburgh. They have the best fans in the nation,” Prince said. 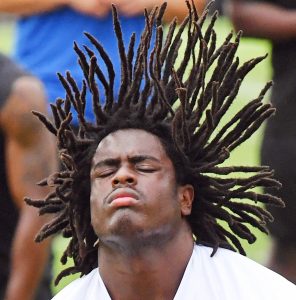 (Courtesy of Pittsburgh Post-Gazette) Pittsburgh Steelers R.J. Prince flips his hair back during warmups at OTA workouts Wednesday, May 30, 2018, at the UPMC Rooney Sports Complex, Pittsburgh.

He is also playing for his family, for “everyone that has supported me since I’ve been in diapers. I feel like I need to give back to them, put it on for them.”

Prince said he feels a responsibility to be a positive role model for other kids in school.

“For them, it seems they will only be in Albemarle when they get out of school. For me, my sophomore year after winning the state title, I went to camps and realized I had a shot to play in college. I had to capitalize on that opportunity.”

His advice for other young athletes and students is simple: “if you work hard for the things you want, it may not come up as quickly as you want, but if you have patience and work your butt off, you will reap the rewards someday.”

Running into players in the hallways like Ben Roethlisberger, Antonio Brown and Pouncey, whom he grew up watching play in the NFL, helped him to realize he has the chance to play with them on Sundays.

His work ethic to stay with the team is strong as he often stays at the Pittsburgh practice facility until 6 p.m. when most players are gone hours before.

“It feels good to know you have the ability to (play in the NFL). It’s been my dream to be out there since I was a little kid. I won’t stop trying to get better each and every day…it’s a cool situation.”