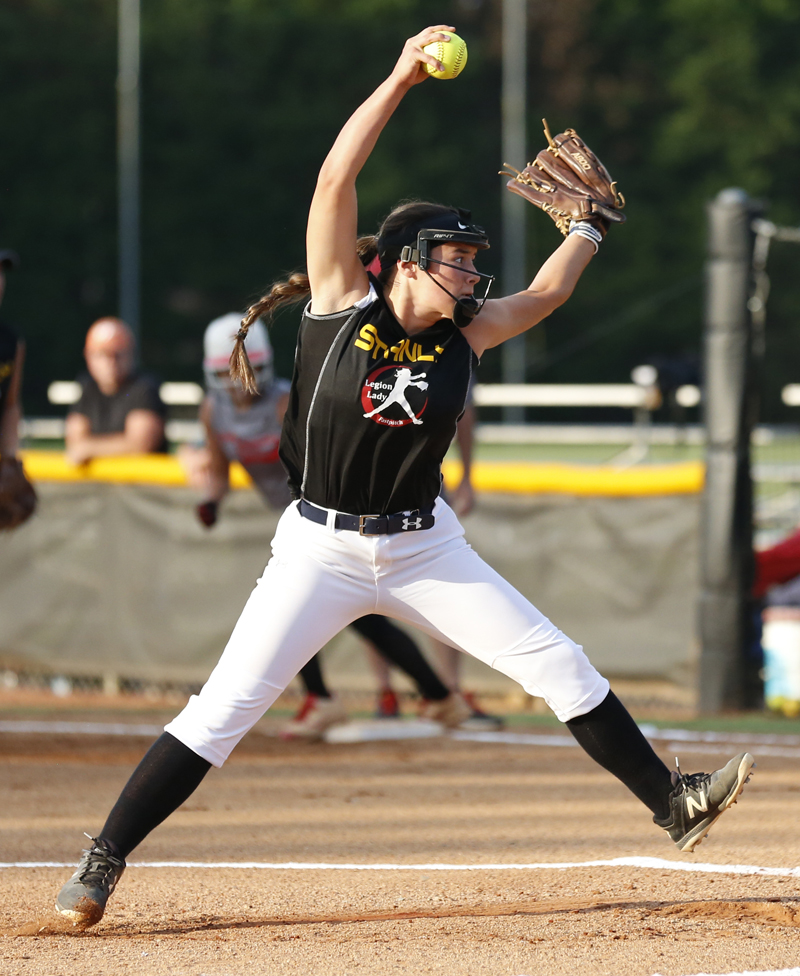 (Photo by Earl Bradshaw, for the SNAP) Stanly Lady Legion's Allie Glover fires to the plate in a home game this season.

With the threat of storms looming, rain began to fall as the national anthem played.

Stanly fell behind early and dropped to 0-7 on the season with an 11-0 loss to its conference’s leader. 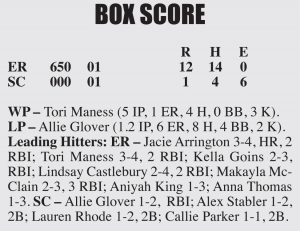 Tori Maness got the win for Eastern Randolph (6-1, 6-1 conf.) allowing one earned run in five innings. She did not issue a walk and struck out three.

Allie Glover took the loss for Stanly (0-7, 0-7) pitching into the second inning.

Kylie Crump relieved Glover with two outs in the third and finished out the game for Stanly. She allowed one earned run on six hits in 3.1 innings with two strikeouts.

Glover walked the leadoff batter, then during the second at-bat, rain forced the game’s suspension.

After a 10-minute delay, play resumed and Eastern Randolph sent all 11 batters in its lineup to the plate, scoring six times. Maness and Lindsday Castlebury each drove two runs in with singles. Makayla McClain added an RBI single to right and Shyanne Gay walked with the bases loaded to score another run.

Jacie Arrington kicked off a five-run second inning for Post 81 with a one-out, two-run homer to left. Later in the inning, Ashley Rook walked with the bases loaded and McClain drove in two runs with a single up the middle.

Callie Parker broke a string of eight straight batters sat down by Maness with a two-out double to center in the third.

Stanly’s Glover turned a double play in the top of the fourth after moving to first base. With two on and no out, she caught a Rook line drive and doubled off the runner at first.

Kella Goins added a 12th run for Post 81 with a two-out RBI single in the fifth.

Stanly avoided the shutout in the fifth, taking advantage of the team’s third double of the game. With one out, Lauren Rhode doubled to right, then scored when Glover singled to left. The next batter lined into a double play at first base to end the game.

With the win, Eastern Randolph leads by 1.5 games over Western Randolph for first place in the Eastern Conference of the Central Division.

The second half of the doubleheader was postponed due to storms. A makeup date has not been announced.