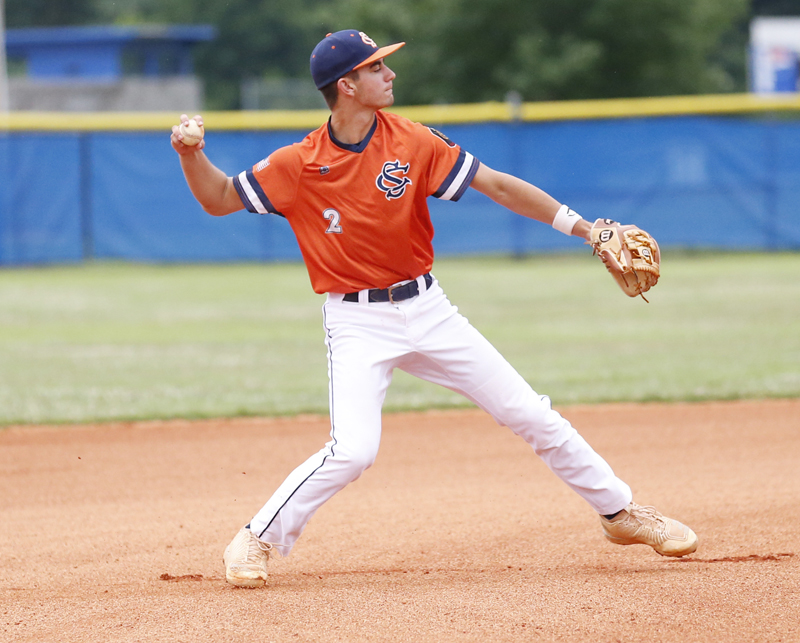 Stanly's Will Dagenhart throws to first to complete a double play in the first inning of Stanly's home game Tuesday against Rowan.

Entering Tuesday’s game at Don Montgomery Park, Rowan had an active eight-game win streak over Stanly. Rowan last lost to Post 76 in an 8-2 non-league defeat on June 4, 2015. Stanly has not beaten Rowan in a divisional game since two wins at the end of the 2012 season.

The second game of a home-at-home series saw Stanly rally from an early one-run lead. However, Rowan scored four unanswered runs to make it nine in a row over Post 76, 5-2. 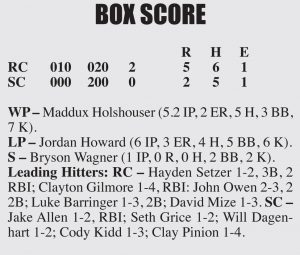 Maddux Holshouser picked up the win for Rowan (19-6, 5-2 div.), reaching the pitch limit in the sixth inning with two outs. He walked three and fanned seven allowing two earned runs on five hits.

After Daniel Sell pitched to one batter in the sixth for Rowan, Bryson Wagner earned the save with a scoreless seventh.

Stanly’s defense turned in some strong plays in Tuesday’s game, including in the top of the first inning. After Hunter Setzer walked, Howard struck out the next batter. Trevor Atwood then sent a sharp liner to short. Will Dagenhart made the play and doubled up the runner at first to end the inning.

Rowan made the most of its opportunities in the game, including taking an early lead in the second. A walk and a David Mize single led to a single run after a balk moved both into scoring position. Wagner then drove in Chandler Lippard with an RBI groundout.

Holshouser did not give up a hit until the bottom of the fourth when Seth Grice singled to center. Cody Kidd followed with a single, then with two outs designated hitter Jake Allen sent a ground ball into right field scoring Grice.

A throwing error put Stanly up a run with the next batter, Dagenhart, at the plate. Allen was caught in a rundown between first and second on a pickoff attempt, but the throw to second went wide. Kidd trotted home to put Stanly up 2-1.

After Allen’s hit, Stanly looked to add to the lead in the fourth when Dagenhart sent a line drive off the shortstop with two outs. Allen tried to score from second base, but Clayton Gilmore turned and threw to Atwood behind the plate, who made the tag for the third out.

Rowan immediately answered in the top of the fifth. John Owen led off with a long double to center field then CP Pyle walked. Both scored when Hayden Setzer tripled to the corner in right field, putting Rowan back up 3-2.

Howard ran into the pitch limit after six innings, bringing A.D. McRae on in relief for Stanly. Owen greeted him with a double, then later scored on a Clayton Gilmore single to left. Trevor Atwood added an RBI sacrifice fly in the inning to give Rowan a three-run cushion, 5-2.

Wagner took over on the mound and walked the first two batters, but bore down and struck out the next two. The final batter popped out to first on the first pitch of the at-bat to end the game.

Stanly County head coach Jordan Sells said Howard did a good job on the mound in the game but that later on “the pitch count wasn’t working in his favor, so we had to pull him when we did. I thought he commanded the zone well; he had a really good two-pitch mix with his fastball and curve ball.”

Sells also talked about the team’s offensive chances, saying “we’ve been preaching from Day 1: we have to come through with runners in scoring position. We have to capitalize…that’s what Rowan has always done. They’re always going to stay up in their dugout and compete to the last pitch.”

Stanly wraps up the regular season with a three-game road trip. Post 76 travels to Concord on Wednesday night, then to Mocksville Thursday, which was moved up a day. The regular-season ends for Stanly Saturday at Kannapolis.