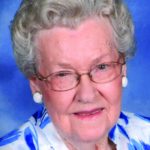 Ruby Price Hatley, 95, of Albemarle, N.C. passed away on Thursday, June 28, 2018 at Stanly Manor in North Albemarle.
A celebration of her life will be held at 2 p.m. on Saturday, June 30, 2018 in the chapel at Stanly Funeral & Cremation Care of Albemarle.
Receiving of friends by her family and close friends will be from 1-2 p.m. prior to the funeral.
The burial service will follow at Stanly Gardens of Memory.
Ruby was born to Sarah and James Price on May 18, 1923 in Lilesville, N.C.
She was the baby sister and youngest of her older brothers Ray, Boyd and Lloyd, and sister, Maddie, all of whom preceded her in death.
Along with her older siblings, she was raised in a Christian home filled with love and strength which prepared her for the challenges that would come later.
Ruby attended Norwood High School, during which time she met the love of her life and best friend, Joseph David Hatley.
On March 4, 1939, Ruby and Joe married and began a life together. Little did they know, war in the Pacific would soon separate them.
After Joe returned from serving his country during WWII, he and Ruby moved to Albemarle, N.C. where she began work at A&P Grocery.
During this time, Ruby and Joe became established in the Stanly County community, joining West Albemarle Baptist Church in 1951, purchasing their first car and home.
In the years to come, health struggles for Joe forced her to take on the role of breadwinner and caregiver when he was diagnosed with Rheumatoid Arthritis.
At the closing of the A&P Grocery Store, Ruby had the opportunity to serve her community as Communications Officer for the City of Albemarle Police Department.
In 1976, following multiple surgeries in hopes of improving Joe’s mobility, he passed away leaving Ruby to continue her life alone. But with an everlasting cheerful spirit and a servant’s heart, Ruby was never alone!
With the support of family, neighbors and strong friendships, Ruby continued her life and service in Stanly County as she worked and volunteered.
In her later years, she served on various church committees and could often be found driving others to appointments and serving as a Pink Lady at the hospital.
When her health forced her to stay home, she was only a phone call away with listening ears to young and old alike.
In 2014, she moved into Stanly Manor Assisted Living unit and quickly became the life of the unit. With her quick wit and sharp mind, Ruby was a welcome daily sight and sound to staff and visitors alike, including Miss Stanly, the cat.
Ruby had many passions that she joyfully shared with others like cooking, gardening, crocheting and, of course, her strong faith in Jesus Christ.
One of her favorite Bible verses was John 14:27: “Peace I leave with you; my peace I give you. I do not give to you as the world gives. Do not let your heart be troubled and do not be afraid.”
She lived her life with an assurance of that peace. With a joyful spirit and peace in her heart, Ruby had the ability to make friends in all walks of life. Those friendships stretched throughout her life and helped to sustain her during her final days.
When she called you her friend, it meant something to her and you were valued. She leaves behind so many dear friends.
Though she and Joe had no children of their own, she was a mother figure to many. Her nieces, Jane Poplin of Norwood (Don) and Peggy Wallace of Matthews, and Jim Price Jr. of Huntersville celebrate the life they shared with their special Aunt Ruby.
Her niece, Brenda McSwain, of Albemarle, preceded her in death.
She also has a number of great nieces and nephews that held a special place in her heart.
After 50 years of friendship, Ruby leaves behind her dearest friend and caregiver, Lois Hall. Their bond has endured births, illness, weddings, moves, everyday life and deaths.
Ruby also leaves behind a godchild, Donna Hall Gaskin (Bob) and family.
Her nurturing heart, strong ethics and smart attitude are etched on all our hearts.
On behalf of Ruby, her family and friends would like to offer a very special “Thank You” to the caregivers Miss Ruby has had through the years while at home and during her time at Stanly Manor, as well as the Hospice Staff.
You brightened her days with every smile, gentle touch and comforting word.
May the love she had for you never be forgotten and may your life be changed by the way she lived hers.
In lieu of flowers, Ruby requested that memorials be sent to West Albemarle Baptist Church or Hospice of Stanly and Uwharrie.