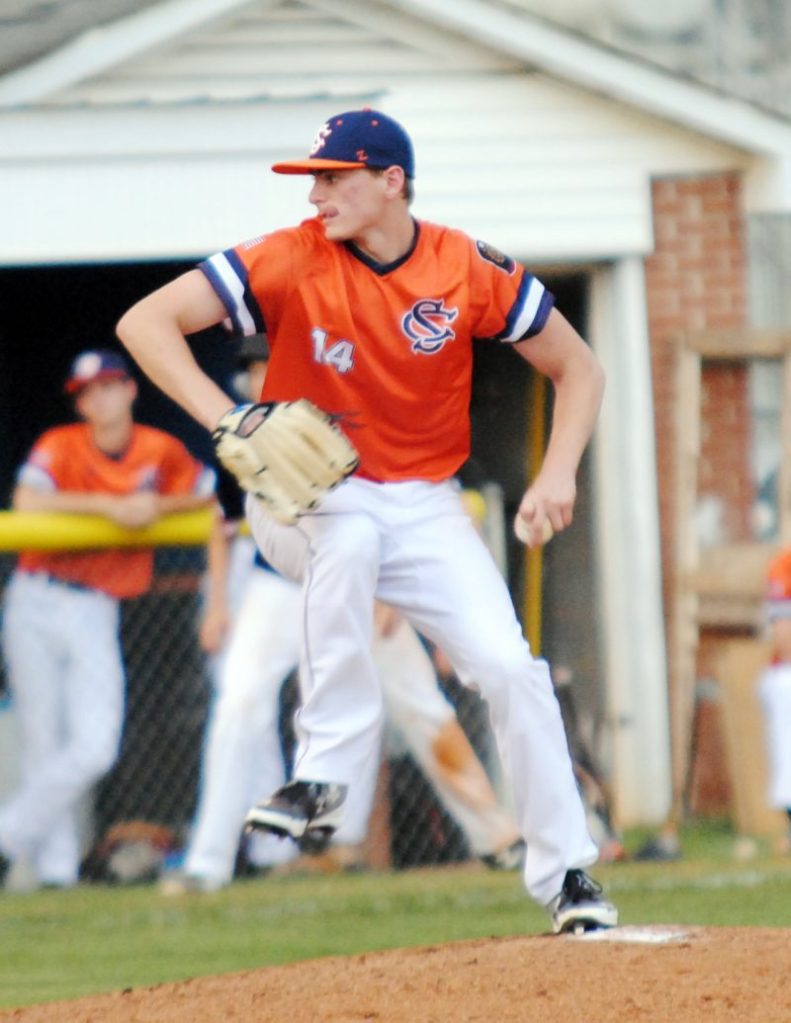 In a number of the games this season for the Stanly County American Legion baseball team, victories have come from late-inning rallies.

No rally has been for as many runs as Thursday’s rally on the road at Post 54 Mocksville-Davie. Stanly trailed 5-1, tied the game, then scored four seventh-inning runs to win 9-6.

Neither starter figured in the decision in Thursday’s game. Jamie Thomas earned the win in relief for Stanly (7-13, 3-5 div.) while Justin Chaffin took the loss for Mocksville (10-10, 3-5). 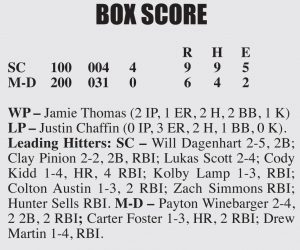 Chaffin was the fourth of five pitchers for Mocksville, none of whom threw more then 45 pitches total.

Stanly took an early lead off Payton Winebarger in the top of the first inning. Will Dagenhart doubled and scored when Kolby Lamp singled to second base. 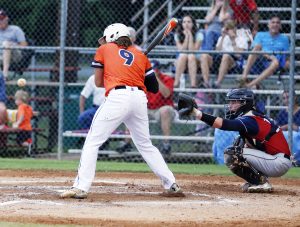 Kolby Lamp takes a pitch during a home game this season for Post 76. Lamp had an RBI single in the top of the first in Thursday’s win at Mocksville.

Stanly had a runner in scoring position in the top of the fourth on an error and walk, but neither scored.

Errors led to three runs for Mocksville in the last of the fifth. Two errors came on bunts, while a third on a ground ball put Post 54 up 4-1.

Later in the fifth, Payton Winebarger doubled to left to give the hosts a 5-1 advantage, Mocksville’s biggest lead in the game.

Stanly’s late-inning magic started with a four-run sixth inning to tie the game. With Patrick Usher on the mound, Clay Pinion was hit by a pitch and Lukas Scott singled to left. After Colton Austin drove one run in with a line drive to left, Cody Kidd tied the game. He took a 2-1 pitch over the fence in left for a three-run blast, tying the score 5-5.

Thomas walked the first batter in the bottom of the sixth, then recorded the out on a sacrifice bunt and struck out the next batter. Drew Martin then doubled down the third-base line, scoring Usher to put Post 54 up 6-5.

Chaffin was then greeted in the seventh immediately by Stanly with a walk and two singles. With the bases loaded, Zack Simmons, who replaced Seth Grice in the lineup after he was hit in the head by a ground ball, drew a bases-loaded walk, tying the game.

Austin was then plunked with the bases full, putting Stanly up one run. Kidd drove in another run on a fielder’s choice and Hunter Sells added a sac fly, giving Stanly a three-run lead, 9-6.

Patrick Winebarger tried to ignite a late rally for Mocksville with a one-out double to left. The next batter reached on an error, but the game ended on a 6-3 double play from Dagenhart to Austin.

The second of Stanly’s three-game road trip to end the regular season is scheduled for Saturday at Kannapolis, who is battling Rowan for first place in the division.

Post 76 travels to Concord on Sunday for a 3 p.m. game to wrap up the regular season.

Tentatively, the playoffs are scheduled to start for Stanly on Tuesday. Should Post 76 not receive home field advantage in that best-of-three series, Stanly would likely be at home Wednesday.