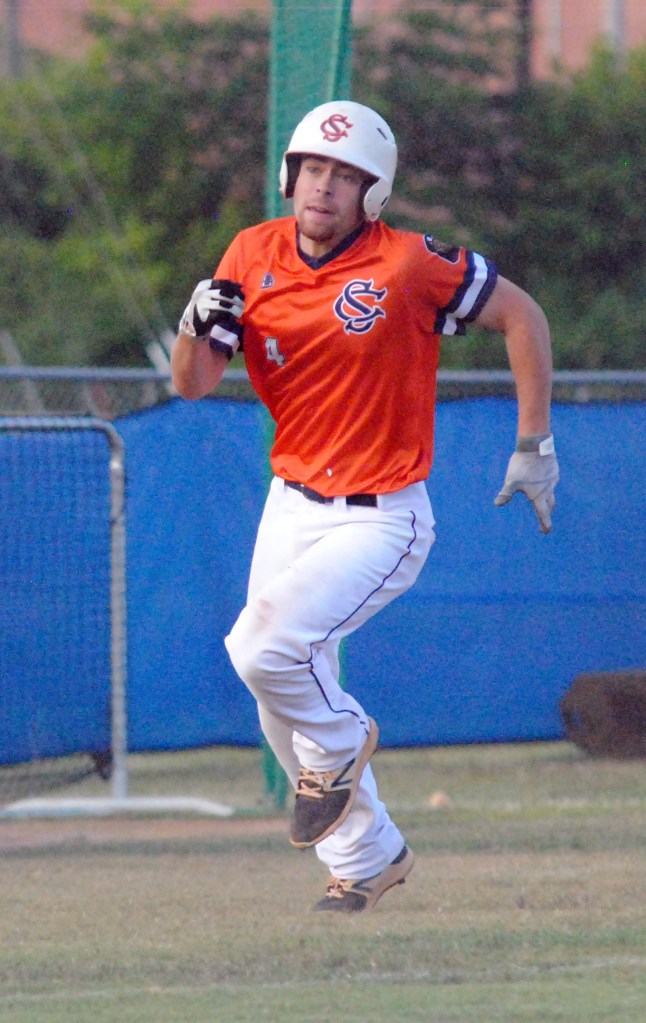 Brady Parker heads for home in a home game this season for Stanly County Post 76.

Stanly is scheduled to open the playoffs tonight on the road against the No. 4 seed from the Northern Division. As of Monday, Davidson County trailed Eastern Randolph by a half-game for the fourth seed. Davidson was scheduled to host High Point for one final league game.

Post 76 fell behind early, but as the team has done several times this season, Stanly rallied to pull even twice. However, a single run in the bottom of the seventh lifted Post 115 to a one-run win, 6-5.

Jamie Thomas started for Stanly and allowed three earned runs on two hits, all coming in the bottom of the first inning. Thomas walked four and struck out four; he did not figure in the decision.

Jacob Tuttle got the win for Kannapolis as the pitcher of record in the sixth inning. Tuttle threw one inning of scoreless relief.

The long ball was the offensive weapon of choice for Post 115 as all six runs came on three home runs.

Cord Butler put Kannapolis up with a two-out, three-run homer to left field in the first inning.

Stanly got one run back in the top of the second. Cody Kidd singled and later scored on an RBI fielder’s choice by Colton Austin.

Post 76 tied the game in the fourth with two runs. Hunter Sells brought Lukas Scott home with a ground ball into right field. Austin drove in his second RBI of the game, a single to left scoring Jake Allen to tie the contest, 3-3.

Tyler Captain relieved Thomas in the sixth inning and gave up hits to the first two Post 115 batters. Chase Orrock singled to left, then pinch hitter Mike Harrell put Kannapolis in front with a two-run homer.

Trailing 5-3, Stanly rallied again to pull even with Kannapolis. An error and two walks loaded the bases for Post 76. Sells drew a bases-loaded walk, then Scott later scored on a wild pitch with two outs.

With one out in the bottom of the seventh, cleanup hitter Jacob Tuttle hit a walkoff, solo shot over the fence in right field.

Offensively, Allen led Stanly with two hits including the team’s only extra-base hit, a double in the fourth inning.

Both Concord and Stanly had nine hits in Sunday’s matinee at Mount Pleasant High School, but Post 51 cashed in more often. Concord’s nine safeties led to 11 runs, all coming in the first four innings, as Post 76 lost on the road 11-3.

McConnor Wallace started for Concord, allowing two earned runs on five hits in three innings. Stephen Kutay relieved Wallace on the mound in the fourth and allowed one earned run on four hits, picking up the win in relief for Post 51.

Ryan Baucom took the loss for Stanly, allowing six earned runs on five hits in one inning on the mound. Baucom was one of four pitchers used by Post 76 in the game.

With one out in the top of the first, Kolby Lamp singled followed by a Clay Pinion double to left. Both scored when Scott doubled to right field, giving Stanly an early two-run lead.

Jeremiah Boyd and Alex Cirino each had two-RBI doubles in the bottom of the first. Nolan Devos then added a two-run home run to left to put Concord ahead after the first inning, 6-2.

Noah Love and Connor McGee each added RBI singles in the second inning. McGee later scored on a wild pitch off Scott to extend the Concord lead to seven, 9-2.

Ick Cirino delivered an RBI triple in the third and Boyd added an RBI groundout in the fourth putting Concord up, 11-2.

Stanly scored its final run of the game in the top of the fifth. Pinion led off with a single then scored when Kidd doubled to left.