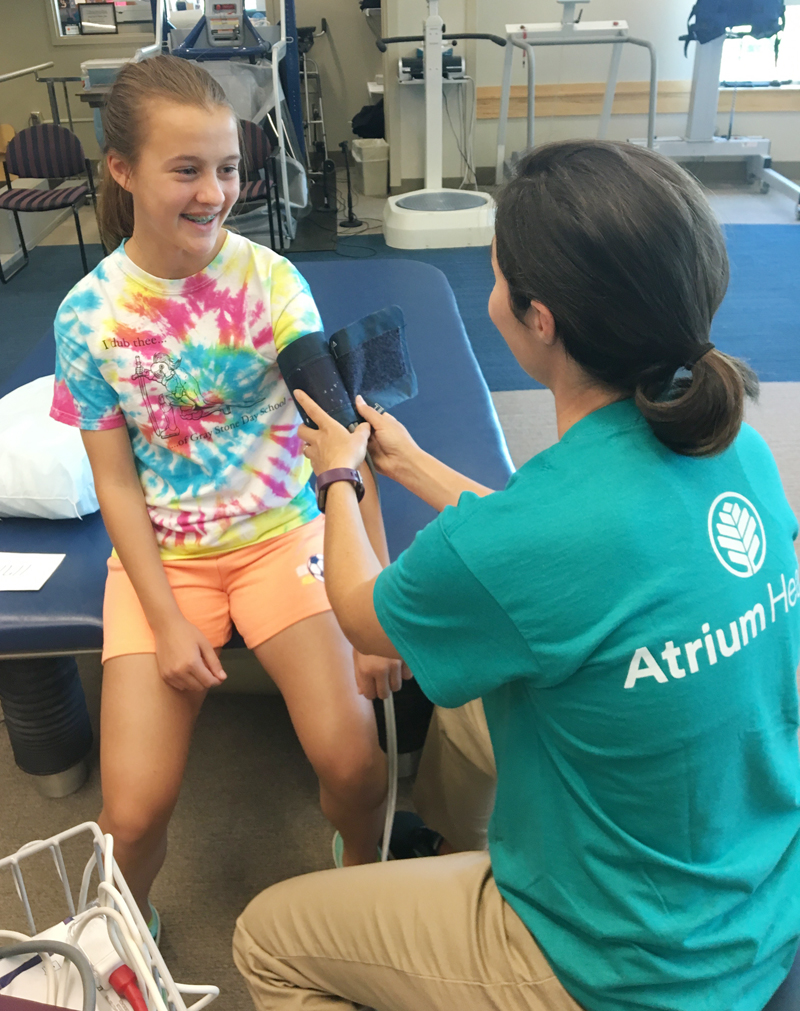 Sarah VanHorn, an eighth grader at Gray Stone Day, is examined by one of Atrium Health's professionals at the Game Day Ready event. The event annually offers free physicals for Stanly County student-athletes.

Student-athletes in Stanly County had the chance recently to receive a free sports physical before the upcoming academic year.

The program has existed for a number of years, but with improvements to the screening process, more athletes were examined this year, according to Scott Brone, director of rehab services.

Brone, in his 22nd year as a certified strength and conditioning specialist, has worked with athletes at every level from youth to the pros.

“I’ve enjoyed every minute of it…it’s my passion,” Brone said.

According to Brone, Atrium Health increased its efforts to work with Stanly’s coaches, athletic directors and school officials to get the word out about the program.

The physicals themselves have not changed much, but the patient flow process was different this year. A computerized platform and a preregistration process helped to speed athletes through the rehab area. In past years, same day surgery had been used.

One difference this year, Brone said, was using physical therapists and orthopedic specialists to do assessments while other clinicians in Teammate Health did the medical side.

“It made for a quicker, easier flow,” Brone said.

In the rehab area, athletic trainers examined athletes for knee, shoulder and ankle injuries along with scoliosis.

The hope, Brone said, is to be “able to pick up on orthopedic injuries and structurally be able to find those with specialized, more thorough (methods)…if you can watch an athlete start, stop, hop and squat, you can hopefully pick up on minor orthopedic deviations before they become a major problem.”

Brone said a key is testing athletes “in a controlled environment” which he said “an athlete may cross the threshold for tolerance…finding it early and identifying it.”

He added the body adjusts to injuries with compensatory movement patterns, the body’s way of saying, “I can’t do that normally, but if I alter this, I can still accomplish this task.”

Under the trained eyes of athletic trainers and orthopedic specialists, athletes were examined for such patterns. Brone said those patterns “can be functional, but doing it will end up in tissue damage.”

Brone said a number of parents at this year’s event commented on their appreciating the in-depth screen. He added the numbers were up around 280, nearly double as in recent years.

A goal is to keep the event free of charge and keep the inconvenience minimal, according to Brone.

“Some bottlenecked a little bit, but it will be smoother next year…there were lots of laughs and smiles. We try to have a good time with them while looking for issues and make quality suggestions,” Brone said.

With athletic trainers at the five high schools now employed by Atrium, injuries are being identified much earlier in the process, Brone said.

“That’s why we need these folks here,” Brone said. “Trainers are the kings and queens of acute injury management.”

Before the annual event, Brone said, the hospital hosted a Saturday morning injury clinic from 9-11 a.m. during football season. The clinic was busy much of the time.

After the ATC program began putting certified trainers in the schools, the need for that clinic was reduced to the point of not needing the Saturday program anymore.

“Everything is being managed in-house by the trainers…they do a wonderful job and there is not a need for the ‘black and blue’ clinic,” Brone said.

The event also helps to show the quality level of medicine practiced by Atrium Health for athletes and the entire community, Brone said.

“The quality of care is exceptional here. I’ve practiced all over the country; this is the most competent group I’ve ever worked with…we want to be one with the community; at the end of the day, we are still Stanly Hospital,” Brone said.

He added the goals for the Game Day Ready event are to continue to offer it every year while it becomes more comprehensive.

“Our goals are to make it even better for the student-athletes,” Brone said.