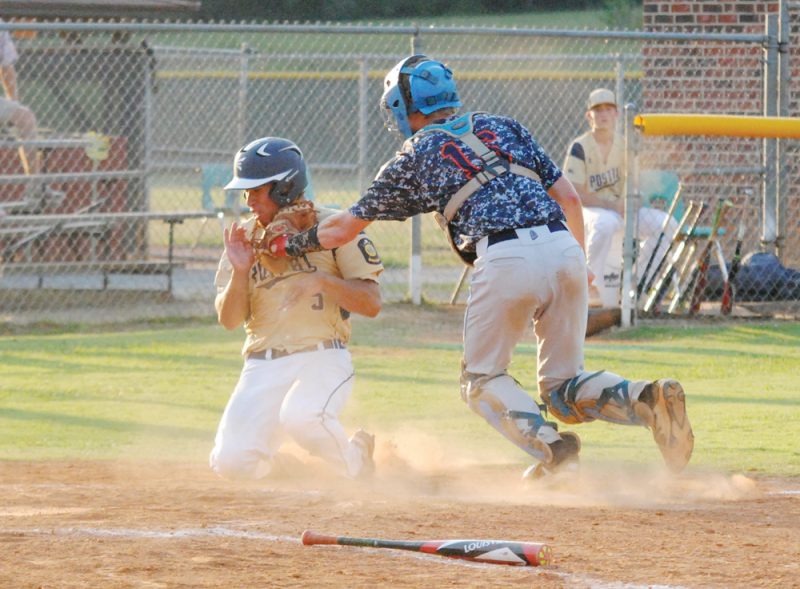 The Area III American Legion playoff opened on Tuesday night with 10 teams playing the first of a best-of-three series.

For Stanly Post 76, who finished fifth in the Southern Division, the opening series meant going on the road to Eastern Randolph to face Post 81.

This season, the two teams had played three non-league games, with Stanly winning the first and Eastern taking wins in back-to-back nights.

Stanly’s struggles in the first inning continued Tuesday, but the difference was Post 76 fought back to earn a 4-3 road win in the first game of the series.

Tyler Captain settled in after a rough first inning and earned the win for Stanly (8-15). He allowed three runs on nine hits with one walk and one strikeout. 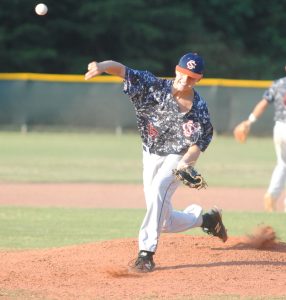 Ryan Baucom allowed one walk and two hits in the seventh inning but did not give up a run to earn the save.

Adam Dossenbach took the loss for Eastern Randolph (9-14). He was charged for two earned runs on three hits with two walks and seven strikeouts. Nate Canter pitched an inning of scoreless relief for Post 81.

The win for Stanly was the team’s first playoff win since winning the opening game of the 2016 first round, when Stanly beat Greensboro 3-1.

Stanly manufactured a run in the top of the first inning. Will Dagenhart led off with a double down the left field line then eventually got to third on a wild pitch. Clay Pinion then grounded out to second to score Dagenhart.

Four consecutive hits for Eastern Randolph in the bottom of the first led to all of the hosts’ runs in the game. Connor Patterson led off with a single to left then Connor Shipley doubled to right. Both scored on a two-RBI single to right from Hunter Little.

Still in the first, Jordan Cassell doubled to the fence in center field and later scored on a Kaleb Lowe RBI sacrifice fly putting Post 81 up 3-1.

Stanly pulled to within a run in the top of the second without a hit. Cody Kidd walked, moved to second on a wild pitch and was sacrificed over to third on a bunt from Seth Grice. Kidd then scored on a Jake Allen sacrifice fly to right.

Post 76 kept the hosts off the board in the second inning. After two singles, Little singled to center field, but Stanly’s Lukas Scott threw a strike to Hunter Sells at the plate to cut down a runner for the third out.

A bunt single by Scott down the first base line and two Eastern fielding errors helped Stanly tie the game in the top of the fourth, 3-3.

Post 76 built a two-out rally in the fifth to retake the lead. Pinion reached on an error and Lukas doubled to the fence. With runners on second and third, Pinion scored on a wild pitch.

Stanly’s defense made two big plays late in the game to stay ahead. The first came in the bottom of the fifth after Cassell doubled to lead off the inning. After a groundout to Pinion at third and a fly out to left, Pinion saved a run with a diving stop to his right on a hot shot at third.

Allen delivered another defensive web gem in the sixth inning. He prevented a run when Matt Moody sent a line drive toward the line. Allen hauled in the ball after running a long way to keep Stanly up 4-3.

“I was ready for the ball and I caught it. I didn’t know if I could get to it, but I was going to try to get it,” Allen said.

Post 76 got the lead runner on in the seventh on a Dagenhart single. However, Post 81’s Murphy turned a 6-3 double play to help stop the rally.

In the last of the seventh, Cassell walked and Lowe singled with two outs to right. Moody walked to load the bases, then the final batter popped out to Colton Austin in foul territory behind first base for the final out.

Stanly head coach Jordan Sells said Captain “tightened down the screws” after the first inning, adding: “I didn’t think he was very sharp in the first inning, which has been our Achilles heel all year. After that, he bore down with guys on base and made good pitches when he had to.”

Sells also talked about taking advantage of Eastern Randolph’s errors, saying “when you get extra outs at the plate, you have to take advantage of it.”

Stanly’s head coach also said his team ran the bases well in the win, which is key for the team.