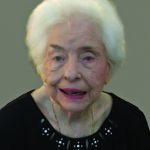 Mary Rudolph Furr, age 91, of Albemarle, passed away Thursday, July 5, 2018 at Spring Arbor of Albemarle.
Mrs. Furr was born September 15, 1926 in Nashville, Tennessee to the late Royston Rice Rudolph and the late Bainey Lewis Rudolph.
She was also preceded in death by her husband of 64 years, Ted Penny Furr; four brothers, Robert, Irving, Jim and Kenneth Rudolph; and a great-grandson, Kaleb Furr.
Mary was employed as a Teacher Assistant for Albemarle City Schools for many years. She was a member of First Baptist Church of Albemarle, where she was active in WMU and taught Sunday School for many years.
She was a member of the Eastern Star and was active in numerous local garden clubs.
Mary’s most cherished honor was that of being a loving mother, grandmother and great-grandmother.
The family will receive friends from 12-1:45 p.m., Saturday, July 7, 2018 in the church parlor at First Baptist Church of Albemarle, 202 N. Second Street, Albemarle.
The funeral service will follow at 2 p.m. in the church sanctuary officiated by Dr. Andy Jung and Dr. Roger Thomas.
Burial will follow the service at the Fairview Memorial Park at 1425 East Main Street, Albemarle.
Family and friends will also be received, at other times, at the home of Bob and Penny Townsend, 44568 Dennis Road, Albemarle.
Survivors include two sons, Reed Furr and wife Patti and Todd Furr and wife Kelly; daughter, Penny Townsend and husband Bob, all of Albemarle; seven grandchildren; nine great-grandchildren; a twin brother, Royston Rudolph Jr. of Royston, GA; and numerous nephews and neices.
Memorials may be made to First Baptist Church of Albemarle, 202 N. Second Street, Albemarle, NC 28001 or Hospice of Stanly County and the Uwharrrie, 960 N. First Street, Albemarle, NC 28001 or Monarch (Lafayette Group Home), 350 Pee Dee Ave., Albemarle, NC 28001.
Hartsell Funeral Home of Albemarle is serving the Furr family.
Online condolences may be made at www.hartsellfh.com.