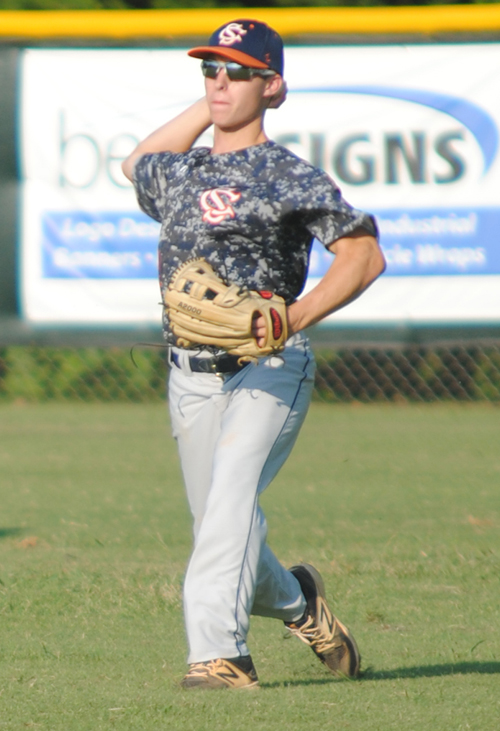 Cody Kidd warms up during a road game this season. Kidd earned the win on the mound in his first start for Post 76 this season in Thursday's win.

Sells said he hoped his team’s stronger at-bats later in that game carried over to the next day, meaning Thursday’s deciding third game of the best-of-three series. 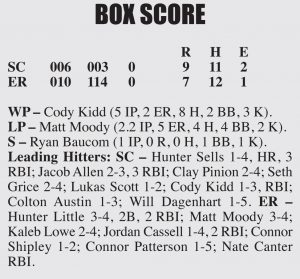 The Stanly skipper got his wish granted. Stanly jumped out to a five-run lead and never trailed, earning a 9-7 road win.

Cody Kidd scattered eight hits, allowing two earned runs in his first start of the season for Stanly (9-16). Kidd struck out three and walked two to earn the victory.

Sells said Kidd “gave us a good outing in his first start of the summer.”

Ryan Baucom pitched a scoreless seventh and picked up his second save of the season.

Stanly loaded the bases with a single and two walks in the first inning but did not score.

Post 81 took the initial lead in the bottom of the second when Nick Canter was hit by a pitch with the bases loaded. The next batter lined into a double play to Colton Austin at first base.

Will Dagenhart led off a six-run top of the third for Post 76 with a single. Kolby Lamp moved him to second with a sacrifice bunt, then a groundout kept Stanly’s leadoff hitter at second. Two walks loaded the bases for Jake Allen, who drove in two runs with a single up the middle. Seth Grice added a line drive RBI single to right to score Cody Kidd to put Stanly up 3-1.

Mason Canoy took over on the mound for Eastern Randolph and faced Stanly’s catcher, Hunter Sells. With a 1-1 count, Sells drove the next pitch over the fence in left field for a three-run blast. The home run put Stanly up 6-1.

Eastern Randolph got one run back in the fourth on an RBI groundout after two singles and an error. Post 81 then added a run on a wild pitch in the fifth to pull within three runs, 6-3.

Post 76 added three critical runs in the top of the sixth inning. With one out, Clay Pinion walked and Lukas Scott singled to right. A wild pitch moved both up a base, then Kidd singled to left to score Pinion. Allen then drove Scott in with a sacrifice fly, and Kidd later scored with two outs to put Stanly up 9-3.

Scott took over on the mound for Stanly and was greeted by back-to-back singles. The Post 76 reliever struck out the next two batters, but Hunter Little kept the inning alive with a two-RBI double to right. Jordan Cassell then drove in two more runs with a single to left, pulling the hosts within two runs, 9-7. After a fielding error, the next batter grounded into a fielder’s choice to shortstop for the third out.

Baucom pitched around a one-out walk in the last of the seventh and got two groundouts to end the game.

“Our guys did a great job carrying over great at-bats from last night’s game,” Sells said Thursday night. “We did a good job hitting with two outs and ran the bases extremely well.”

Referring to the playoff series win, Sells said: “It means a lot for our program. We have been building for this the past few summers and it says a lot about the team that we have this summer.”

Stanly will take on the Southern Division champions from Rowan County Post 342 in a best-of-five series starting with tonight’s game at Catawba College. Game 2 will be Saturday at Don Montgomery Park, with the two teams alternating home dates. Post 76 has lost nine straight games to Post 342.