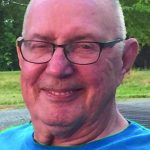 Billy “Wayne” Eudy, 76, of Locust, NC went to be with his Lord on Monday, July 9, 2018 surrounded by his loving family.
Wayne was born December 12, 1941 in Cabarrus County, NC to the late Krone Harrison Eudy and the late Mary Lou Furr Eudy. He was also preceded in death by his wife, Shirley May Eudy; and brothers Phillip Monroe Eudy and Kenneth Ray Eudy.
Survivors include his daughter, Sherri S. Stutts and husband Todd; granddaughter Macy Stutts; grandsons Jonathan Stutts and Ethan Stutts; great grandson James Stutts; sisters Kay Proctor and Mary Jane Dorton; brothers, Clay Van Eudy, Johnny Eudy, Edward Eudy and Roger Eudy; as well as numerous nieces and nephews.
Wayne was known for his kind and gentle spirit. Children and animals were drawn to his loving personality. To know Wayne was to love him. He will be dearly missed by his family and friends.
The family will receive friends from 6-8 p.m., Tuesday, July 10, 2018 at Hartsell Funeral Home of Midland. The funeral service will be on Wednesday at 3 p.m. at Community Baptist Church in Locust officiated by Pastor Landon Keziah, with a 30 minute state starting at 2:30 p.m. Burial will follow in the church cemetery.
In lieu of flowers, memorials may be made to Community Baptist Church. Hartsell Funeral Home of Midland is serving the Eudy family.
Memories and condolences may be shared at www.hartsellfh.com.