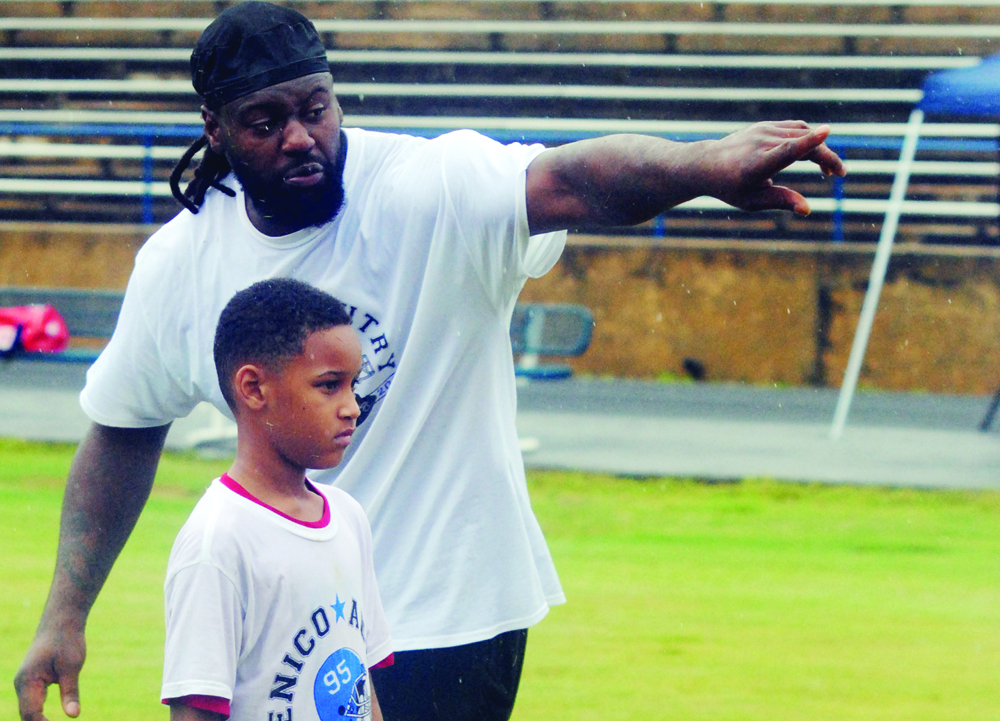 (Photo by CHARLES CURCIO) Carter Biles gets instructions from Denico Autry on how to run a drill during Autry's 2018 summer camp.

Former Albemarle football standout Denico Autry made a commitment last July to host a free football camp in his hometown.

That day, under hot, sunny skies, a little over 100 campers had fun learning the ins and outs of the game while getting to meet a current NFL player. 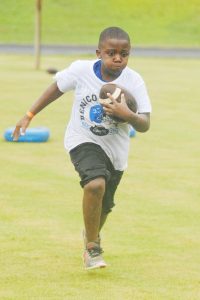 Josh Leake carries the ball across the wet field in a drill at Saturday’s Denico Autry Camp.

On Saturday, Autry returned for the second annual camp, where despite a near-constant pouring rain, nothing dampened the spirits of the volunteers and campers.

More than 270 youth signed up for the camp this year, which also included a cheerleading camp. Estimates of the camp’s attendees on Saturday exceeded last year’s total as approximately 170 participated in the events.

“It was great today. I have to first give thanks to the volunteers; they made everything possible,” Autry said. “The turnout was great.”

Autry, who signed a multi-year free agent contract this offseason with the Indianapolis Colts, said he was watching the weather minute by minute and the rains started as campers stretched out to start the camp. 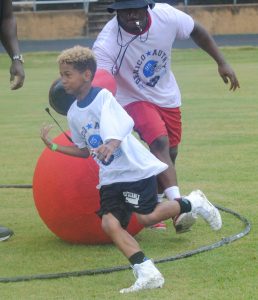 Fun was the name of the game at last year’s camp and this one as well, Autry said, adding he wanted to give back to the community.

Another current NFL player, the Pittsburgh Steelers’ R.J. Prince, was one of the many former Stanly high school football players volunteering as coaches for the camp. Having another NFL player from Stanly at the camp, Autry said, was a blessing.

Along with current Buffalo Bills general manager Brandon Beane, Stanly has four individuals working at the highest levels in the NFL.

Autry recalled the days when he played football for Albemarle fondly.

“Back when I was coming up, it was all about football. This place was like a ghost town on Friday nights. It shows you how the county football is,” Autry said.

The Indianapolis lineman said he felt it is his duty to help keep the sport of football thriving in Albemarle and Stanly County.

“It starts with the younger kids growing up; you have to start when you’re young,” Autry said. “That’s what I try to bring to them. A guy from the same town they are from made something of himself, let them know anything is possible.” 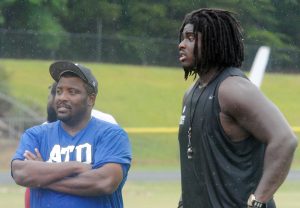 Albemarle head coach Richard Davis said having players like Autry and Prince come back to do the camp “lets these kids know there is a way out. A lot of kids feel like this is it. There is a world outside of here. You can achieve whatever you want if you put the work into it.”

Davis described Autry as being humble and down to earth, adding: “He is always home. When some people make it, they never come back. That’s not the case with him…he’s just like one of the guys.”

The camp, Davis said, is all about Stanly football as a whole and not any individual school, which is important.

“At the end of the day, we are all about making kids better. One thing I’ve learned about the county rivalries: it’s still a brotherhood as well. They want to kill each other when they are playing, but after the game they are boys and hanging out again,” Davis said.

As for the future of the camp, the number of current NFL guys may grow next year, according to Autry. He said he has spoken with the New York Giants’ B.J. Hill, the former West Stanly standout, about he, himself and Prince having an even bigger camp next year. 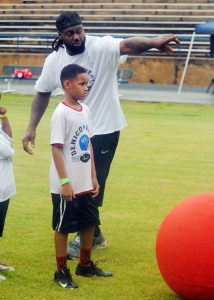