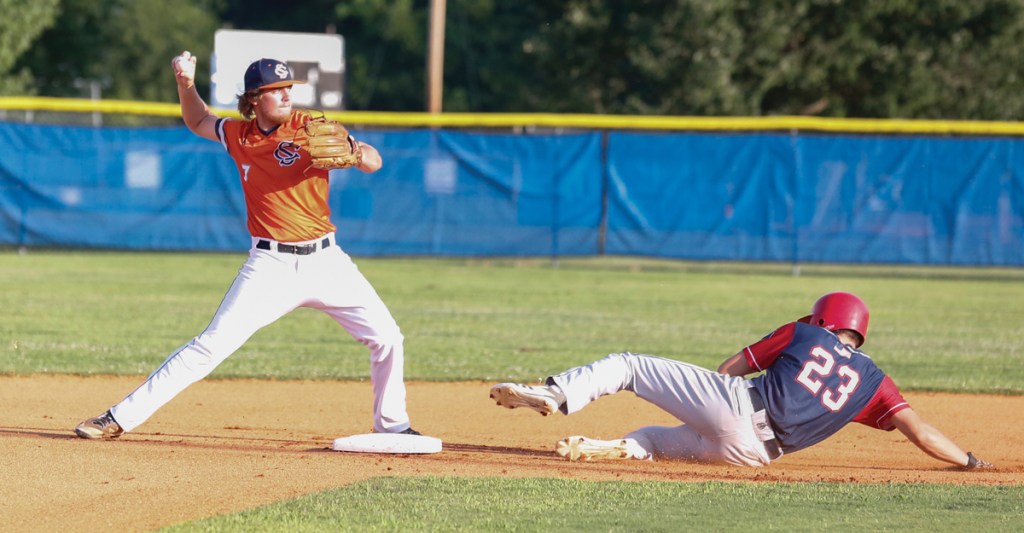 For five innings, Game 2 of the Area III quarterfinals series was a even matchup between host Stanly Post 76 and visiting Rowan Post 342.

Despite having walked six batters, Stanly starter Jordan Howard struck out seven and limited Rowan to no runs over the first four innings. His offense staked him to an early lead as well.

However, the pitch limit caught up with Stanly in the sixth as four relievers issued eight more walks and gave up 10 runs in the final two innings. Rowan scored 12 unanswered runs in the game to win 12-3.

Maddux Holshouser got the win for Rowan (23-6) allowing two 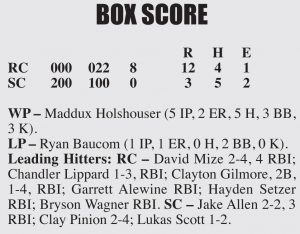 Ryan Baucom took the loss in relief for Stanly (9-17). Howard threw five innings for Post 76, allowing two earned runs in the top of the fifth, throwing just under the 105 pitch limit.

Stanly got out of an early jam after a leadoff walk in the top of the first. A ground ball to Will Dagenhart started a tailor-made 6-4-3 double play. The inning continued on a dropped third strike and a single before Howard ended the inning with a strikeout.

Post 76, playing in the team’s seventh game in eight days, got another big offensive game from Jake Allen, who had two hits and drove in three runs.

This year’s Don Montgomery Award winner, Allen drove in two in the bottom of the first. Kolby Lamp walked and Clay Pinion singled on a perfectly placed ground ball down the third base line. Lukas Scott walked to load the bases, then after a fly out Allen sent the first pitch he saw into right field, scoring Lamp and Pinion. 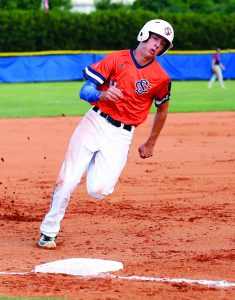 Rowan stranded five runners on base in the first four innings, all in scoring position, with only two of those runners drawing walks.

Post 76 added a run in the bottom of the fourth after Scott led off with a single. He reached second on a botched pickoff attempt, then scored later when Allen singled to center.

Walks started to hurt Stanly in the fifth as Rowan scored two runs. Bryson Wagner walked, and with two outs Trevor Atwood was struck by a pitch. Both runners moved up on a wild pitch, then Wagner scored on a second wild pitch thrown to Chandler Lippard. After Lippard walked, David Mize singled to left to score Atwood to pull Post 342 within a run, 3-2.

Baucom took over in the sixth for Stanly and walked the first batter. After a bunt groundout, a hit batter and another walk loaded the bases.

Clayton Gilmore then grounded into what could have been an inning-ending double play. John Owen scored the tying run, then, when the throw to first went wide, Wagner scored to put Rowan up 4-3.

Pinion took over for Stanly in the seventh and got the first batter to fly out, but hit Mize with a pitch. The next six batters, off Pinion and Lamp in relief, all drew walks, with pinch runner C.P. Pyle scoring on a wild pitch.

Scott took over for Lamp and got a fly out but hit the next batter, driving in another run. Mize then had the only hit of the inning for Rowan, a single to right, scoring three runs. Mize would have had a double but he stumbled at first base.

“They know we are short-staffed considering we just played a three-game series and (Rowan) has been off. They earned that bye…they know they can go deep in the counts, get that starter out and they would be fine,” Sells said. He added the strategy was what Post 76 did in the opening round against Eastern Randolph.

“That’s the key to Legion, having numbers to where you can throw guys out there ready to go. You can have some pitchers you can count on,” Sells added. “We have to have numbers.”