In a time when videos of law enforcement officers doing bad things seems to surface frequently, one member of the N.C. Highway Patrol hopes his video sheds a positive spotlight on the law. 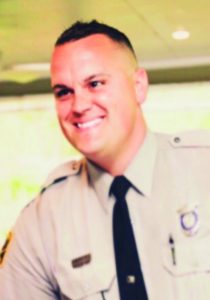 Whit Efird of Oakboro created a video for a fellow officer whose child is battling cancer.
Efird takes on the #LipSyncChallenge that many of the country’s law enforcement members have tried.
In his video, which was later posted to the North Carolina State Highway Patrol page on Facebook, Efird sings along to Junior Brown’s song “Highway Patrol.”
The video was posted to the state page July 10 and by Friday it had already hit 1 million views and garnered more than 2,700 comments online.
“That song I play a lot,” Efird said, referencing “Highway Patrol.”
“I’m in a lot of Christmas parades around the county and when I go to the Christmas parades I play that song over the PA in my patrol car,” he added.
Efird said the Highway Patrol has a strict social media policy, so he was reserved about posting it online. So he sent it to a friend instead. The friend sent it up the chain of command and it was soon on NCSHP page.
Efird, a senior trooper, has been employed by the Highway Patrol since 2012.
He credits his mom, a former deputy clerk of court, and dad, who worked in construction, for exposing him to law enforcement role models when he was young.
He remembers getting a Highway Patrol badge sticker.
“It was a lasting impression,” Efird said.
As he grew older, he says he thought more about pursuing a career in law enforcement.
“I just want people to know, that with some of the negativity that is shown on police across the country — to show a positive spotlight on law enforcement,” Efird said. “We’re humans like everyone else. We like to have fun like everyone else.”
Efird said the video was created before he began his shift one day.

Schools come together over jazz