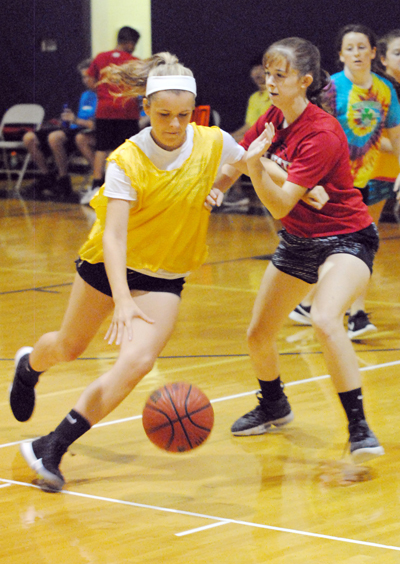 (Photo by CHARLES CURCIO/Staff) Lily Hager drives to the basket guarded closely by Mary Beth Bowers during a game at the 25th annual Hoops Unlimited Camp.

The location of the annual Hoops Unlimited basketball camps may have changed over the years, but many things have stayed the same. 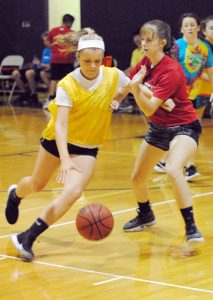 (Photo by CHARLES CURCIO/Staff)
Lily Hager drives to the basket guarded closely by Mary Beth Bowers during a game at the 25th annual Hoops Unlimited Camp.

Former campers continue to come back every year to work as camp counselors.

Finally, two men have been the driving force of the camp for 25 years. 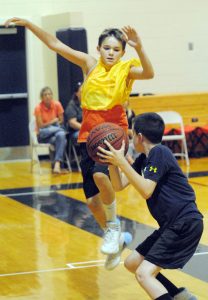 (Photo by CHARLES CURCIO/Staff) Gavin Helms goes up high for the block during an afternoon game.

For 13 years, Roseman coached the Mustangs’ men’s basketball varsity team, while Gibson coached at Richfield and North Stanly Middle for 25 years. Gibson has been on the Hoops Unlimited staff for 18 years. 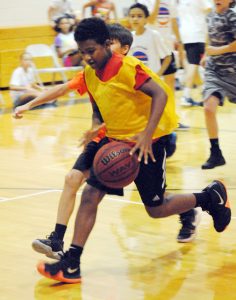 (Photo by CHARLES CURCIO/Staff) Isaiah Blalock fends off a defender.

Roseman, along with three other coaches, first formed the camp in 1994 as the East Rowan Basketball Camp which had a total of 43 over two weeks. Eventually, that camp grew to three weeks.

By 2002, the camp moved to Richfield because of Roseman’s friendship with Gibson. After two years of being known as the Richfield and North Hills Christian Camps separately, the two camps became Hoops Unlimited in 2004. The camp location changed to Erwin Middle School in 2009. In 2011, the camp moved to its current home at North Stanly Middle.

Gibson said Roseman’s “ability to lead a staff and to teach fundamental basketball skills and life skills to young people” is one reason the camp has continued.

For himself, Gibson said the best parts of the camp every year include “a great hot lunch, fast pace of teaching, caring nurturing staff and Rick Roseman.”

A number of this year’s camp counselors spent many a summer at the camps, including current Newberry College player Luke Gibson, who was a long-time camper before joining the staff five years ago. 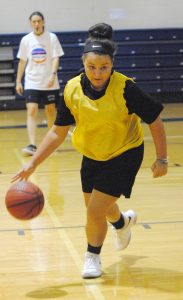 (Photo by CHARLES CURCIO/Staff)Andrea Furr puts the ball on the floor in a game.

Coach Gibson said he had pictures of Luke from previous camps where he “was just knee-high to a grasshopper.” The coach added “obviously, it’s extremely rewarding to see players like that go through the camp. We try to follow them through high school and see them play occasionally.”

Another returning counselor, former North Stanly and Catawba standout Brooke Whitley, has coached in high school. She has been on staff for 15 years.

In choosing assistants, Coach Gibson said it is all about “selecting quality young people that have a passion to teach kids and to actually talk to these kids about life and basketball.”

(Photo by CHARLES CURCIO/Staff) Jack Williams drives the baseline looking for a layup.

The best basketball counselors, Gibson said, have fun with the kids on the court playing knockout, 1-on-1 or other games.

“The kids all look up to the counselors…Roseman emphasizes having fun. We want (campers) to learn basketball and teach skills…if you want it bad enough, you can be a good player.”

Using Luke as an examples, Coach Gibson said the current Newberry player “is not tall or overly fast, but he just worked and worked. His willpower got him to play college basketball. He will get an education, a degree, all powered by his skills in basketball.”

Gibson said the kids have so much fun at the camps, adding “you would think maybe they

would get sick of basketball, but they don’t…they are constantly moving and not in a station more then eight to 10 minutes.” 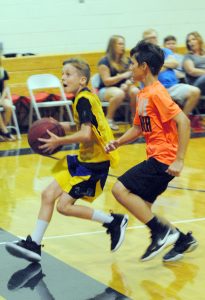 After years of working a defensive station, Gibson is now the man in charge of the daily all-you-can-eat lunch, working the grill. The coach said he feels that aspect of the camp is appealing to the campers.

The two week time frame is exhausting to himself and Roseman, Gibson said, but he said the two still have a passion for the camps.

If the right coach came along that share Roseman and his philosophy on the camp, Gibson said, they “wouldn’t have problems passing the torch” to another.

Until then, however, Gibson said “as long as Rick needs me, we will still be a team.”