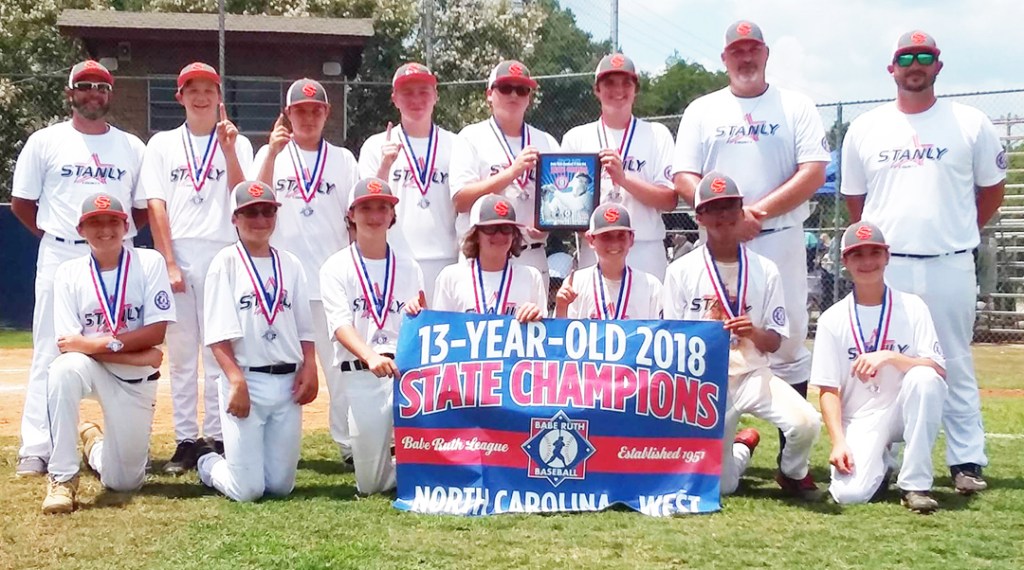 Stanly 13-year-olds claimed the championship with a win Saturday and a victory one night later to claim a spot in the 2018 Southeast Regional in Hendersonville, Tennessee.

Should Stanly win the regional title, the team would advance to the Babe Ruth World Series Aug. 9 in Mountain Home, Arkansas.

The opening game of the tournament for Stanly came Saturday against the Matthews Athletic Recreation Association (MARA) team, who advanced with a win over Union County Waxhaw the day before.

In a game featuring a lot of offense, Stanly advanced to the championship round with a 17-15 win over MARA.

Stanly scored in all but one inning and put four runs on the board in the seventh, which proved critical to winning the game.

Stanly jumped out to a 2-0 lead in the first inning in front of hits by Reid Smith, Alex Ramiez and Jesse Boone. The locals added another run in the second after Zac Cullers doubled and scored on a Cayman Buck RBI single.

Two more runs in the third for Stanly, including a triple in the inning from Jon Morgan, put Stanly up 5-1.

Stanly led 6-2 before MARA tied the game in the fifth with four runs coming off one hit and three walks.

In the top of the sixth, Stanly sent 11 batters to the plate in a seven-run rally. Singles by Smith, Ramirez, Boone and Schrump helped put Stanly up 13-6.

Five consecutive hits in the top of the seventh, starting with a Tyler Hogwood double, gave Stanly four more runs and a 17-12 lead.

With two outs and one on in the bottom of the seventh, MARA got back-to-back doubles and a single to pull within two runs. The final batter of the game struck out.

Stanly got three hits each from Cullers and Smith. Schrump, Boone and Ramirez all hit safely twice.

UC Waxhaw eliminated MARA on Saturday after MARA lost to Stanly that afternoon to advance to the finals.

Carter Moon earned the win on the mound for Stanly.

In the bottom of the first, Stanly jumped out to a three-run lead. Buck was hit by a pitch to lead off the inning, then Ramirez singled and Boone walked. Moon later reached on a fielding error, allowing runs to score.

Waxhaw scored a single run without a hit in the top of the second, taking advantage of three walks.

Stanly added two runs in the third on singles by Smith and Boone and Ramirez reaching on an error.

The locals added an insurance run in the fifth when Smith singled and later scored.

UC Waxhaw scored on a bases loaded fielder’s choice in the top of the sixth for the team’s other run.