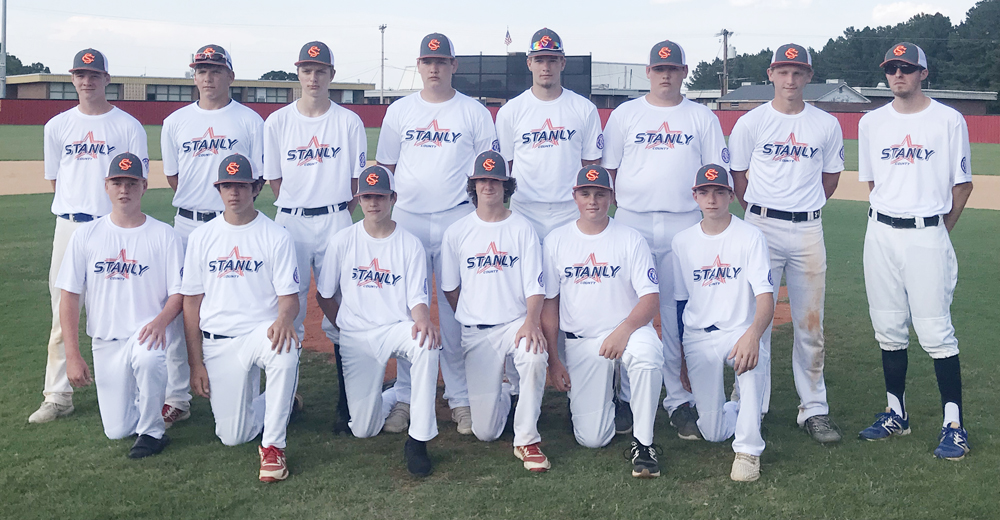 The oldest of the Stanly Babe Ruth Baseball teams, the 15-and-unders, opened play July 12 in the N.C. Western Regional Tournament at Noel Williams Park. The winners looked to earn a trip to the Southeast Regional in Longwood, Florida.

Stanly earned several victories, but came up short, finishing as the tourney’s runner-up.

Stanly’s bats racked up 12 hits and earned an easy 14-1 five-inning win over East Lincoln in the first round.

Matthew Widenhouse was 1-4 with a three-RBI double for Stanly, while Gage Dennis added a double and three RBIs. Jake Cohen and Sawyer Smith each had two hits while Hayden Brown, Lawson Hicks, Jaxon Buck and Peyton Williams each drove in a run. Stanly had 12 hits in the game.

On the mound, Dennis, Logan Lilly and Peyton Williams combined to allow one earned run on one hit in four innings of work for Stanly.

Stanly scored in each of the four innings the team was at the plate, scoring two in the first, seven in the second, one in the third and four in the fourth.

Stanly followed that win with a 9-4 victory in the semifinals of the winners’ bracket over UC Piedmont, who had beaten Newton-Conover 20-0 in the opening round.

The locals trailed 2-0 in the middle of the fourth but scored six runs in the bottom of the inning. Stanly added a run in the fifth and two in the sixth.

For Stanly, Lawson Hicks was 2-for-4 with a triple and an RBI, while Jake Cohen added two hits, including a double and an RBI. Widenhouse added two RBIs while Morgan Bunch, Nathaniel Pickett and Williams all had RBIs.

Sawyer Smith picked up the win for Stanly, not allowing an earned run in 4.2 innings pitched, walking one and fanning nine batters.

In the next round on Saturday, Stanly suffered its first loss of the tournament, a 6-4 defeat to Wilkes County despite getting more hits in the game.

Stanly had four hits while Wilkes had one, taking advantage of six Stanly errors in the field. Dennis and Williams each drove in runs in the game, while Cohen, Smith, Hicks and Bunch had the four Stanly hits.

The pitching staff for Stanly struck out 14 batters but also issued 14 walks.

Stanly played its way into the finals with a 7-0 shutout Sunday over UC Piedmont.

Smith and Widenhouse combined for the shutout on the mound for Stanly. Smith went 5.2 innings, striking out seven while scattering four hits. Widenhouse struck out two and pitched 1.1 innings of scoreless, hitless relief.

Widenhouse also led the way at the plate for Stanly, going 2-for-3 with a double and three RBIs. Brown added two hits, including a double, and two RBIs, while Lawson Hicks added a triple and an RBI.

Playing in its second game of the day, Stanly faced Wilkes County needing to win to force a deciding game the next day. Stanly led midway through the game and tried to rally in the seventh but lost 4-3 to finish second in the tournament.

Wilkes took the lead in the bottom of the second with a bases-loaded walk, but Stanly answered in the top of the fourth. Singles by Hicks and Brown along with a Widenhouse bunt single loaded the bases with no outs. Peyton Williams drove in Hicks on a fielder’s choice, then Bunch put South up with an RBI groundout to third.

In the sixth, Wilkes scored three times to lead 4-2 on one hit and four Stanly errors.

Stanly’s rally in the seventh started with a one-out double by Pickett. After a groundout advanced him to third, he scored when Buck singled to right. The next batter grounded out to end the game.

In the game, Stanly outhit Wilkes 8-4, led by a 2-for-2 performance from Buck.