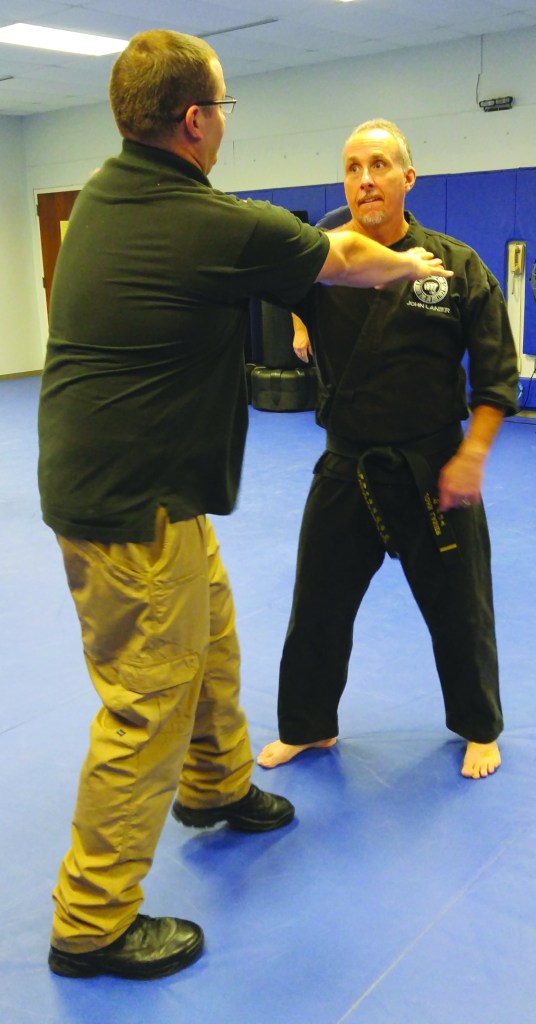 John Lanier, right, stares down his attacker during a class through Invicta Strategic Solutions. Lanier has been in business in Albemarle for around two years.

Keeping people safe has been the business of John Lanier for a number of years.

Having worked as both a military policeman as well as with the Salisbury Police Department, Lanier has more than 30 years experience in self-defense and security.

Now, his business in Stanly County looks to continue to help people learn self-defense both on the job of law enforcement and those in the private sector.

Invicta Strategic Solutions has been in business for about two years teaching self defense to police officers which he described as his “passion.” He later added classes for civilians whom he said “need self defense as well.”

Lanier served for six years in the U.S. Army, then worked for about 25 years with the SPD in various roles. He served as a member of the department’s Special Reaction Team,  and supervised three different units as sergeant, including the gang, vice/narcotics and street crimes units, before being promoted to the rank of lieutenant. Lanier is still a reserve officer for Salisbury.

He earned a master’s degree in justice studies from Fort Hays State University in Kansas and also has certifications from the state of North Carolina to be a law enforcement instructor along with teaching specialized physical fitness. He is also an instructor in the area of specialized explosives and hazardous materials.

Lanier first found the martial arts when working with the street crimes unit. One of his fellow officers, he said, studied under David Mitchell, who Lanier later studied with as well.

“He taught our team defensive tactics, dealing with multiple suspects and gun takeaways. He would come to the department once a week for training…I worked my way through the belt ranks,” Lanier said.

Eventually, Lanier earned a black belt in chayon ryu, which means “the natural way.” With his belt and training, Lanier is certified to teach multiple disciplines, including karate, taekwondo, kung-fu, hapkido and bong-sul.

Lanier said he believes it is important for people to have a basic understanding of self-defense.

“Most people rely on the police to care for them but there are not enough of us,” Lanier said.

“When leaving the business, if someone tries to rob you, the police are not there. You need to protect yourself.”

It’s important for people to have an awareness about one’s situation, which is one of the first things Lanier teaches in classes. People should look for things that are threats and present themselves as aware so they are less likely to be targeted.

The classes teach natural body movements along with learning how to fall as well as avoiding being hit.

“For most people, if you see someone, we have a tendency to look the other way…we teach people to keep your head up, walk straight and notice people. Keep your head on a swivel, walk with confidence.”

Lanier said criminals “want an easy target. If you look like a tough customer, he’s probably going to pick someone else.”

Invicta also assesses threats for businesses; for example, analyzing a threat who might come in the front door, how easy is it to access the rest of a building, lighting and other aspects.

In terms of working with law enforcement, Lanier said most officers normally receive more training with firearms than with defensive tactics, but more times officers use those tactics than using a firearm in situations.

Invicta has taught classes at the community colleges in Stanly, Guilford and Rowan counties and is responsible for having trained officers throughout a number of agencies.

The classes for civilians, Lanier said, tend to draw more female clients than male, but the classes he has taught at SCC and Pfeiffer University had a mix of both genders.

“When we teach, it’s done with natural body movements. No one gets hurt; we practice slow, learn the mechanics of a technique to get it down. With repetition, you can build up speed,” Lanier said.

The classes also vary in difficulty from the basics of body twisting and learning to pull away from an attacker to advanced classes when students learn how to defend versus attacks with knives and guns.

Invicta teaches the same techniques as other more traditional karate classes do but uses a more adaptive style customized to the abilities of each student.

“You will move differently than I do. If it works for you and it’s easy to learn, you’re more likely to practice and use it,” Lanier said.

The emphasis is on not causing harm to students, allowing them to progress at whatever speed makes them the most comfortable.

“Chayon Ryu has no ego; I am teaching you everything I can so you can be the best you can be.”

Lanier said he has a new martial arts class he is teaching specially for veterans as part of a new organization call Kim Soo Karate of Albemarle.

Under the Invicta umbrella, Kim Soo Karate teaches self-defense and traditional martial arts for vets. Lanier said the class “is not about being aggressive. It’s about bettering yourself.”

The new class, which is 6-7:30 p.m. Wednesdays at the Central UMC Youth Center on East North Street in Albemarle, does not focus on competition. Students will start with white belts and move their way up.

Other classes or demonstrations can be scheduled by contacting Lanier through information on his website, www.invictastrategicsolutions.com.