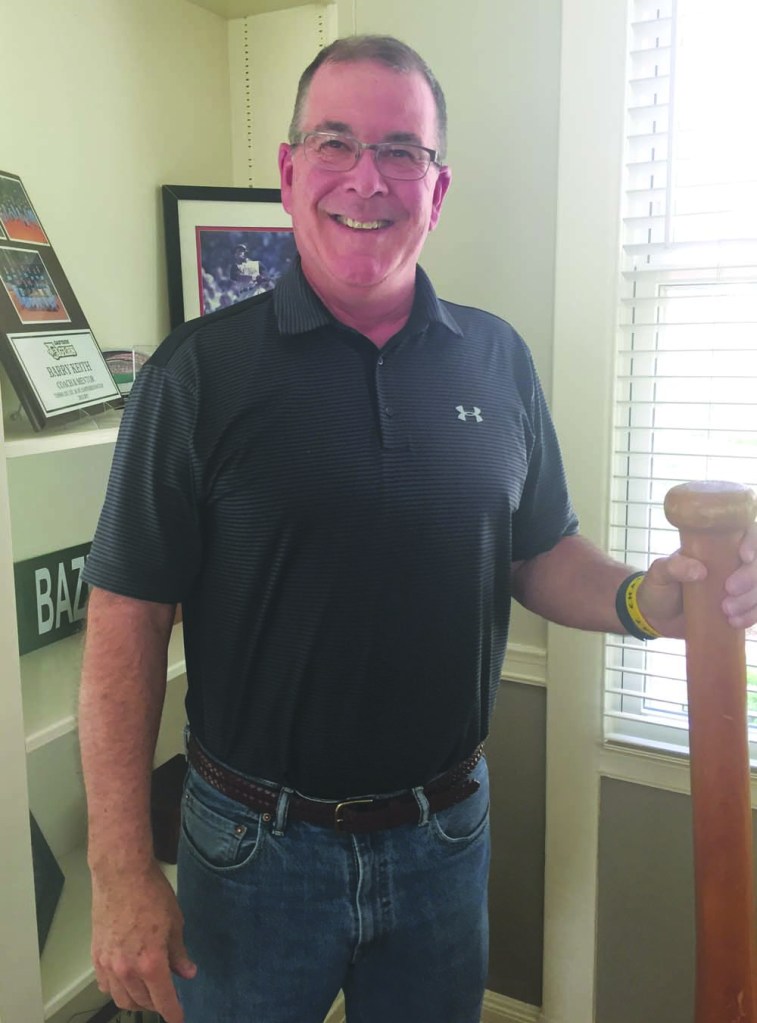 Barry Keith recently retired from high school coaching. In addition to his love of sports, he is fan of sports memorabilia.

Visitors to a private residence on the Pfeiffer University campus might find their attention head toward the subject of baseball.

Inside the house of president Colleen Perry Keith is a collection of baseball memorabilia displayed throughout the living room.

Her husband, Barry Keith, has a number of different autographed bats and baseballs, including several reflecting his love of the Cincinnati Reds and “The Big Red Machine” of the 1970s.

He said he was fortunate to coach as close as he ever had to his home while coaching the Knights, who play their games at Pfeiffer’s Joe Ferebee Field.

However, one health concern along with work obligations made the Keiths take a hard look at his time coaching.

“I loved coaching, but I found out I had a pinched nerve in my back. I’m not as young as I used to be,” Keith said.

Keith is a licensed clinical social worker and worked in private practice for many years. His work allowed him to set his schedule around baseball season.

However, Keith becoming the director of counseling service for Pfeiffer made it more difficult to have a flexible schedule.

Keith said much has changed about the game but added “nothing stays the same.”

One part he did not like as much was the time spent on administrative duties instead of practice.

Earlier in his life, he was asked if he was a counselor that coached or a coach that counseled.

“Depending on the time of year, it might vary,” Keith said.

Being a counselor while coaching baseball gives him a different perspective on the game, he added.

“I see it more and more as I’ve gotten older. I’m trying to teach and help people with growing up, getting ready to move on. It’s as big of a deal and as important to me as the wins coming along,” Keith said.

His view on the game is different than some, rooted in the reality of life.

“We all like to win but the reality is you’re going to wake up tomorrow and go to work or school,” Keith said.

As a counselor, Keith said he learned to take things in stride. However, being less concerned about the wins does not give players and coaches an out to not work hard.

“Work for it because you want to be successful on and off the field, but it’s still a game,” Keith said.

His earlier coaching self may have loved winning, Keith said, but a coach must decide what they are trying to create in terms of a program as you mature.

Another of Keith’s former players is Doug Devore. He made his way up through the minor leagues of the Diamondbacks. Devore played 50 games in the outfield for Arizona in 2004.

Two others who played for Keith were in the minor leagues systems: Pete Shier (Baltimore) and John Lorms (Cleveland).

However, the game of baseball will humble you, Keith noted.

“It’s a battle of who will be the most successful with the least amount of mistakes. Success isn’t always going to happen,” Keith said.

How quickly a player recovers from mistakes and losses is important as well, he noted.

Still, when the game is over, it’s over.

“I’m a firm believer when the game is over, you take your shower and put on your street clothes. It’s time to move on,” Keith said.

Using a bat to hit a ball, Keith noted, is the hardest task in sports. One needs to practice the game constantly, and those wishing to be good just need to keep practicing.

“If you want to be good at it, you can make yourself good. you don’t need a lot of people to practice baseball; you can do it yourself,” Keith said.

However, Keith said he believed players do not need to play the game year round.

“Physically and mentally, you need to take a break.”

His coaching career began shortly after his playing career ended in one collision on the field. While playing as a sophomore at Upper Arlington High School, he and another player collided in the outfield going for the same fly ball.

“Neither of us called for it. He fractured both ankles; I eventually learned I had destroyed my entire right knee and the inside of my left,” Keith said.

Because nothing was broken, Keith said coaches told him to just walk it off.

“I rode my bike home, but I couldn’t make it up the stairs. My knee was swollen bigger then a grapefruit,” Keith said.

In an exam with the orthopedic surgeon, his knee could be moved so far around Keith said one nurse had to leave the room.

His legs were his best assets in baseball and he could hit but not for power.

“I had one home run my entire life and I didn’t know it at the time I hit it,” Keith said.

So baseball was over for him, as well as basketball. Because of the sports medicine of the time, his leg was put in a cast.

While recuperating, his girlfriend’s father asked if he would like to help him coach T-ball. He found he loved it.

After a number of years coaching in the rec leagues with his own father, he turned 18 and began coaching against his father.

He went on to coach middle school baseball and basketball, which led to the freshman baseball team’s job at his old high school.

As his reputation grew, so did his chances to coach more teams, including a travel team called the Icemen. The father of one of the players worked at a dry ice company.

“It always helps to have kids that work hard,” Keith said about the successes of the Icemen. Keith coached the kids for four years starting when they were 12 years old.

“I always got lucky. Their coach quit during the school year. The principal called me in and offered me the job,” Keith said.

With his first wife’s permission, he took the job and coached there for 11 years, setting a number of school records in the process. He also won Coach of the Year three times while at Fairbanks.

He later coached at Spartanburg Day when his wife Colleen was the president at Spartanburg Methodist College. It was his first experience with 1A level high school athletics.

During his time as the American Legion coach in Spartanburg, his team made it to the South Carolina state tournament.

Keith coached the past three seasons with Gray Stone, where the team set school records in wins twice. In three seasons, Keith won 24 games, far more wins than the program had seen in previous years.

“Constantly, I’ve been very lucky. Like when we moved here and the Gray Stone job was open,” Keith said.

Estimating his overall win total at around 700 and losses around 300, including school and summer teams, Keith talked about goals for his teams.

“One of my major goals at any level, was to always work hard and be proud of your effort,” Keith said.

When asked about whether he might coach again, Keith said, “someday I probably will.”

He also added he is “a counselor that coaches.”