In most conferences, points are awarded based on participation and standings in conference play. Each conference determines its own method of awarding points. Conferences are listed alphabetically by classification.

The Colts rallied in the spring season after sweeping the baseball and softball championships, and tied for second place in men’s tennis and men’s golf. West Stanly finished with 79 points, two better then Mount Pleasant, for the school’s second straight conference cup. 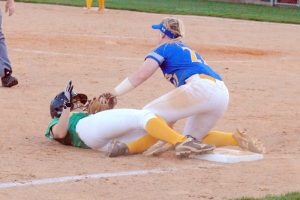 “We couldn’t be more proud of the outstanding effort our student-athletes and coaching staff exhibited this past season to win the Wells Fargo Conference Cup for a second consecutive year,” West athletic director Daniel Smith said.

“This outstanding accomplishment signifies the hard work and sacrifice that everyone associated with each of our athletic programs puts forth on a daily basis. I’m excited to watch our athletes and coaches compete for three in a row during the upcoming year.”

When the conference standings were released for the YVC Wells Fargo Cup after winter sports wrapped up, Gray Stone led by 35 points over West Montgomery. The Knights had swept the swim titles as well as a women’s basketball conference crown.

The Knights built on that lead in spring after claiming two YVC championships: women’s track and women’s soccer. Gray Stone also placed second in men’s tennis to finish with 725.5 points. 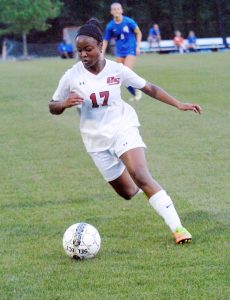 Katie Parah dribbles to the net during a playoff match for the Gray Stone Knights. The womenÕs soccer team won the YVC championship, helping to propel Gray Stone to the Wells Fargo Cup.

North Stanly came in second overall in the Cup standings, winning men’s tennis with a second-place finish in women’s track.

“We are proud of our student-athletes and coaches,” Gray Stone athletic director Jeff Morris said. “The effort they have put in to grow and develop is truly remarkable.”