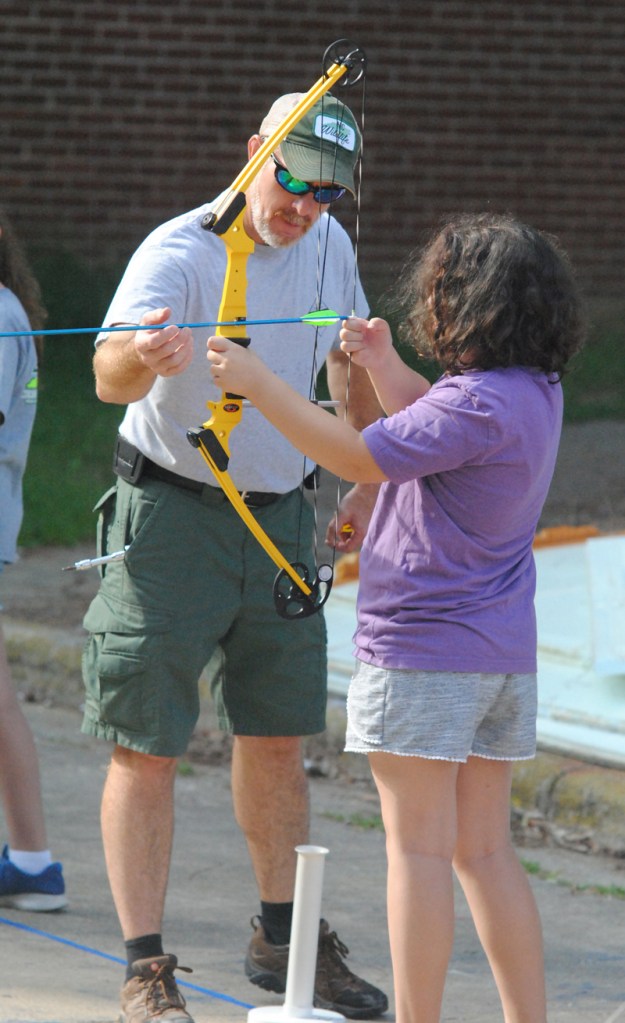 The 4-H clubs of Stanly and Montgomery County joined together at the Stanly County Agri-Civic Center to host an archery event. 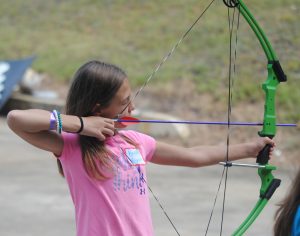 Kristin Hogan works on using the proper techinque during an archery clinic at the Agri-Civic Center. (Photo by Charles Curcio)

A total of 30 kids participated in the event, which included an archery lesson from an expert. Lee Scripture, the state archery education coordinator for the North Carolina Wildlife Resources Commission, conducted the class.

The free class was part of the annual Summer Blast series, according to Kacie Hatley, the 4-H Youth Development extension agent from the Stanly County Cooperative Extension.

“We try to get as low-cost as we can and accommodate people from different backgrounds to get a very diverse audience,” Hatley said. “The kids are having a good time and learning a lot, which is our main objective, that the kids leave having good memories. They are building life skills and experiences and learning new things.”

Hatley said she hoped the kids took away character traits from the event. She said those traits included “learning how to assume leadership roles and work together, caring for one another, taking turns, patience; all those things that are not necessarily taught in the classroom but are learned through life.”

The turnout for the classes has been the most ever, according to Hatley, noting the competitiveness to get into the archery class. 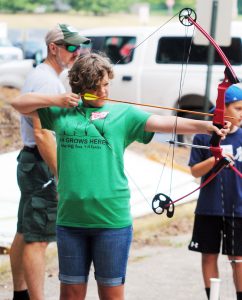 Lena Ratzkiff takes aim at the target during a free clinic at the Agri Civic Center. (Photo by Charles Curcio)

“This class filled up on the first day of signups; there was a line out the door,” Hatley said.

Afterward, Scripture said he thought the youth “had a better understanding and appreciation for the sport of target archery and program through the NCWRC.”

He added archery “is a lifelong learning skill that teaches us the value of getting up, going out and being active.”

Beyond the physical benefits, Scripture said archery “helps us to practice skills such as patience, concentration, hand eye coordination and self-control.”

He added archery “is a universal sport accessible to all types of people regardless of ability level…[and] is a great outdoor recreation opportunity. We hope by introducing target archery it will lead to the desire to learn about hunting and other outdoor activities.” 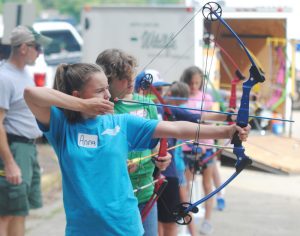 Anna McLendon hits the target with her shot at the recent free 4-H archery clinic at the Stanly County Agri Civic Center. (Photo by Charles Curcio)

Next year, Hatley said, the plans are to have more interns so the classes can be much bigger.

“People who are interested next summer need to really come in early,” Hatley said.