The dream of becoming a coach at the highest level of college basketball continues for one Pfeiffer graduate. 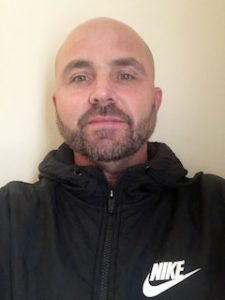 The academy, headed by coach Keith McClenny, has had more than 100 NCAA Div. I men’s basketball players attend the school. The prep program is for players who have graduated high school but whose grades or SAT numbers do not qualify them to play. The school also gives players one extra year to develop their bodies and games, Moxley said, before entering the college ranks.

Graduates of the Red Devils school have attended schools from Div. I such as UNC-Chapel Hill and the University of Central Florida, plus Div. II schools as well.

Moxley graduated from Pfeiffer in 1996 and worked for the team as a graduate assistant before former head coach Jeremy Currier added him to the full-time staff in the 2011-12 season. He also coached the Stanly County Suns AAU team from 2008-10 and was the JV coach for North Stanly in 2013.

He coached last season with Believe Sports Academy in Athens, Tennessee, and coached a nationally ranked high school team which played on the Adidas Grind season. Moxley also coached at the Massanutten Military Academy in Woodstock, Virginia, and West Oaks Academy in Orlando.

“This is a great opportunity for me to continue growing as a coach,” Moxley said. “To be working with young men who will be moving on to play at high major Div. 1 colleges is always fun yet challenging. I love helping kids move on to the next level through hard work and sacrifice, and I feel this opportunity takes me inches away from fulfilling my personal dream of coaching Div. 1 basketball.”