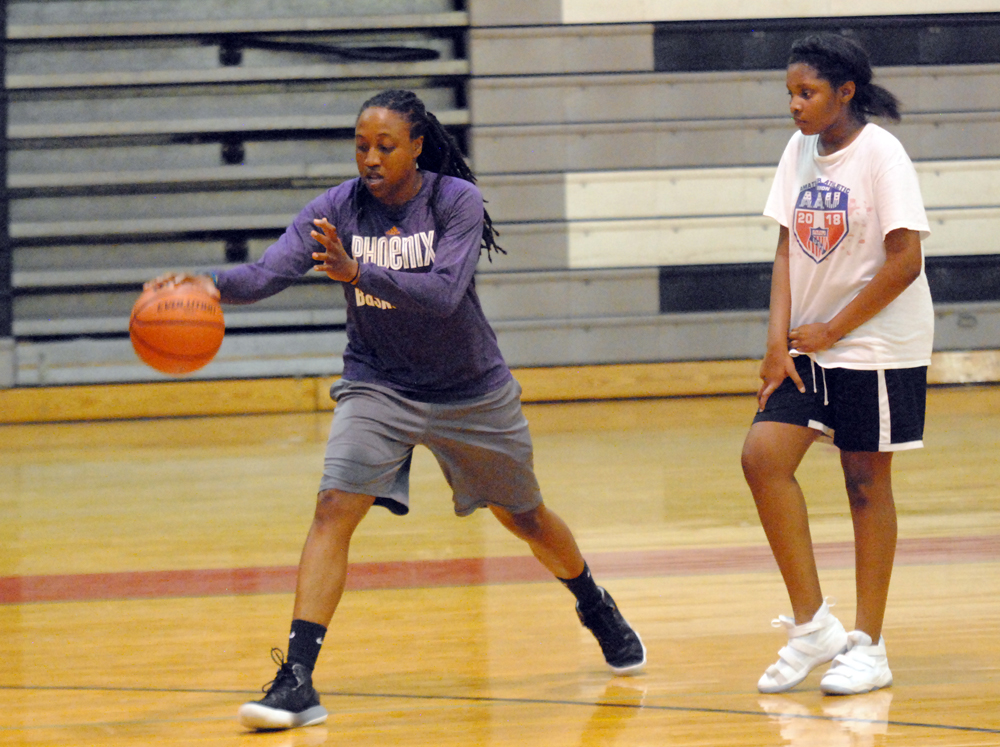 Alexis Hornbuckle shows how to take a big first dribble in driving to the net to Kai Spencer at the BOBW camp. (Photo by Charles Curcio) 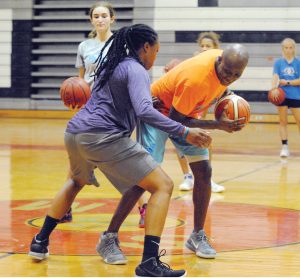 Rico Grier and Alexis Hornbuckle explain techniques for a strong crossover move on a dribble drive. (Photo by Charles Curcio)

Basketball training has become a full-time business for a number of former basketball players, including players who wore the Pfeiffer University colors.

Falcons standouts Rico Grier and Damien Argrett came together in 2016 to form a basketball instruction academy entitled Best of Both Worlds (BOBW). Grier, a guard, and Argrett, a power forward / center, both earned All-American status in their careers at Pfeiffer.

This week, Grier and Argrett hosted a camp at South Stanly Middle School with a special guest instructor with an impressive dossier as a basketball player.

Hornbuckle went on to win two WNBA championships, including becoming the only player to ever win an NCAA and WNBA title in the same calendar year (2008). Her first title was with the Detroit Shock. She won a title three years later with the Minnesota Lynx.

This week’s camp was sponsored in part by the Stanly County Slammers, an AAU youth basketball program directed by Mike Russell which has been around 10 years. Bringing the two experienced players up to Stanly for camp was to get basketball growing in the area, he said. 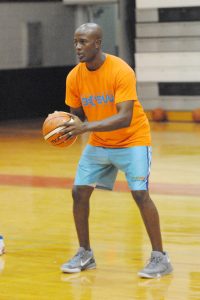 Rico Grier, a former All-American basketball star with Pfeiffer University, shows the proper alignment for shooting the basketball at the Best of Both Worlds camp.

“We are trying to get kids more involved, more knowledgeable about the game of basketball at every level,” Russell said.

He added Grier worked with his son a couple of years ago to improve his game.

Having players the experience level of Grier and Hornbuckle, Russell said, bring an authenticity to the message of playing the game.

“They have the knowledge of making it…I can tell kids something until I’m blue in the face. They can say, ‘Oh, Coach Mike didn’t play.’ These players did,” Russell said.

Hornbuckle said she, along with Grier, Argrett and others, want the kids to learn the fundamentals of the game and doing things the right way. “We break things down like a shot fake into the footwork coming out versus letting kids do what they want, then  picking out the ones that are good and working with them. We really break it down for everybody because we want to see growth in everyone’s game…we stress improvement.” 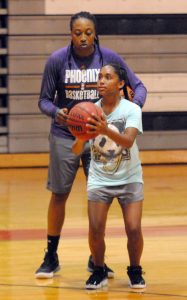 Gia Dunlap gets pointers on her jumpshot from coach Alexis Hornbuckle at this week’s Best of Both Worlds Basketball Camp at South Stanly Middle School. (Photo by Charles Curcio)

Talking about the disciplined approach to the camp, Hornbuckle said that is who she and other coaches are.

“Being a collegiate athlete, playing pro basketball, we understand the significance of the discipline. You don’t want to down the kids to the point where you kill their confidence,” Hornbuckle said.

“We show them first, give them a little leeway, some instruction, then we hold them to a higher standard and teach them accountability,” she added. “Every camp, clinic, individual, we teach accountability.”

She said kids respond to the discipline if it is consistent…it’s about follow through.”

Hornblower played professionally in Poland last year but talked about her long terms goals after her playing days are done.

“I really started out doing camps and clinics before meeting Coach Damien and Coach Rico,” she said, adding she was “drafted” by the two to teach clinics. She now is the director and instructor for the Lake Norman Hornets AAU basketball teams.

Grier said accountability was vital to his message for the kids, both on and off the court. 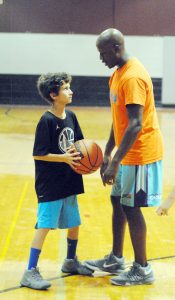 “When I learned how to be accountable for my actions and what I’m doing, with others following me, I became a better leader,” Grier said. “Unfortunately, kids today feel more entitled.”

Having more access to social media then he had growing up is not helpful either, Grier said.

Being accountable for actions on and off the basketball court “will help push them to their greatness.” according to Grier.

“It’s a balance. We hold them accountable. We put them in game-like situations where they are going to fail, but we coach them on the fly and they will get better. That’s what will translate to better their game,” Grier said.

He credits former Pfeiffer head coach Dave Davis as being someone who instilled in him responsibility and accountability.

“Dave Davis is my guy, that guy helped me become being great…he took me from being a young boy to a young man,” Grier said. He also said the foundations of his game were laid by his Harding High School coach, Myron Lowery.

Grier added he hoped the kids took away from the camp important things to translate on and off the court, including hark work, attitude, effort. He said “all of those things you can control…control what you can control.”