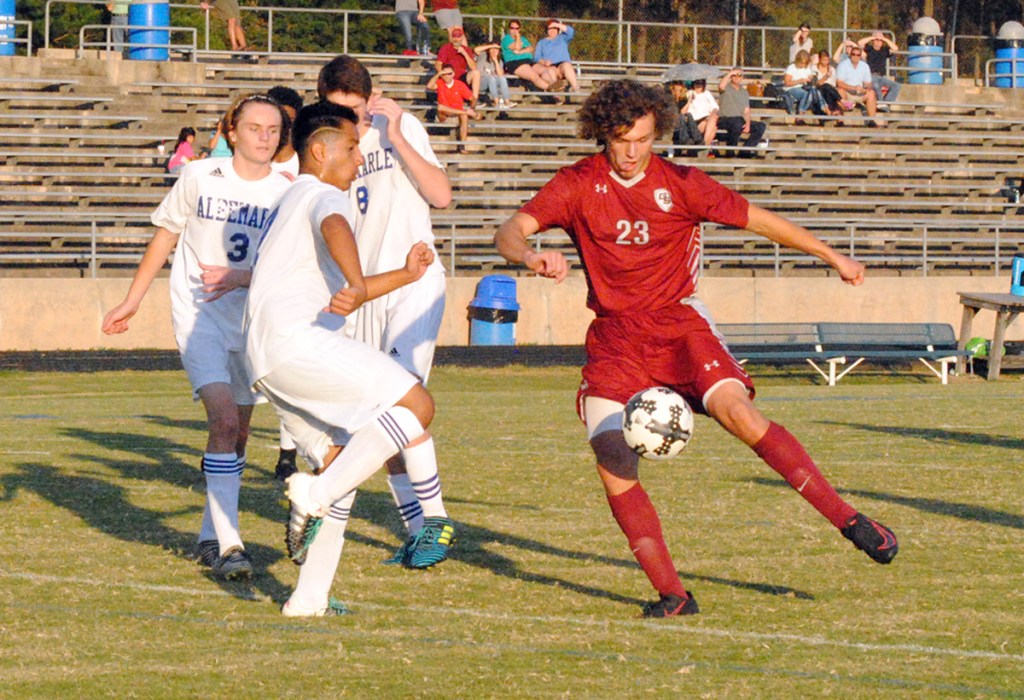 (File Photo) Alex McDow attempts a shot on goal in the Knights' road game last season at Albemarle. Gray Stone looks to defend its share of the YVC champioship this season.

Five high school soccer teams from schools in Stanly will take to the pitch this season looking for success. One team looks to defend its share of the conference title while four others look to make their own respective marks.

One sophomore returning to the team from last season is midfielder Junior Hernandez.

“Practice has been going well and we are excited about our season. We have a nice mix of returning players and newcomers that should be fun to watch,” Moeller said.

The Knights finished tied for the YVC championship with North Moore, splitting the season series with the Mustangs. Gray Stone finished the season 19-2-1 overall (13-1 YVC), the other loss coming in overtime 1-0 to Mount Airy in the state 1A playoffs.

Harrington said he is excited about some of the new players on the squad as well as returning sophomores who played sparingly last season. Sophomores returning include Eric Strohecker, Prior Sparks, Keagan Vang and several others, while freshmen Andrew Beohler, Sammy Hatley, Lofton Pope, Noah Mauldin and Angus Currie “look to build a solid foundation for the future,” according to Harrington.

Gray Stone’s head coach said the squad’s success “will be defined by how well we play together as a team, how well we gel early and really become a family, and staying together all season.”

Harrington said the team has high hopes and goals for the season. The mix of returning players and underclassmen “will allow us to compete right away in any game we play early. As we build throughout the season we hope to continue to grow as a team and get better together to become the best team we can be this season.”

Head coach Justin Carter returns seven starters from last year’s Comets squad that was 7-11 overall and 6-8 in the YVC.

Carter said the team is athletic and “looking to control the midfield while being solid on defense.” He also described Cord in net as “exceptional.”

The North coach said Lowder “should be a force on the defensive end” while Pugh “will control the defensive third of the field with his three years experience as being the quarterback on defense.” He also added the incoming freshmen “have shown their class can hang with the best of them.”

Carter said the goals are to win the county games while competing for the YVC championship.

After not winning a match last season, the Rebel Bulls look to improve by returning nearly the entire starting lineup from 2018. Over half of the team were freshmen last season, with the majority of the rest of the team sophomores in the 0-16 overall effort.

Head coach Jody Ledezma lost three seniors from last year’s team in goalkeepers Michael Bullis and Robert Furr along with Ty Smith. The Bulls have to replace one defender and its keeper for the upcoming season.

Ledezma said several new players look to help the Bulls improve, including junior Parker Crump, who brings experience to the team. Crump spent a great deal of time playing at the top levels of the Charlotte Soccer Academy.

“Last year we didn’t quite pull off a win with our extremely young team, but we came close and we improved leaps and bounds from years before even with such a young team,” Ledezma said. “This year, with only graduating two starting positions and new talent trying out, we hope to show even more progress and hopefully pull off some wins.”

The Colts graduated four seniors from the 2018 squad which was 8-10-6 and 3-3-4 in the 2A Rocky River Conference standings for head coach Ivan Osorio.

“Basically we will have most of the guys from last year so we look forward to a good season both overall and in conference,” Osorio said. “The team has the experience and the skill level to play a good game of soccer.”