Five high school volleyball teams in Stanly County take to the court this week. The Knights look to defend the conference crown with a new head coach while four other squads seek to improve this season.

Wright said 2017 “was a good year for us in that we got some wins that really helped boost our confidence, but overall we fell a little short when you look at how close some of the matches were.”

A former standout on the court during her time at Albemarle, Wright said the team’s goal is to improve on the win total. She wants the Bulldogs to also advance past the first round of the Yadkin Valley Conference tournament and qualify for the state playoffs.

The team has 10 players on the roster, including juniors Kaleah Gaddy (Libero), Kristyn McLendon (Setter) and Ayanna Ridenhour (MB).

One newcomer is sophomore Somahje Parker (MH), whom Wright said “can absolutely jump out of the gym.” Parker will play her first year in volleyball in 2018, but Wright said she was “optimistic about her role this year and the years to come.”

As always, Wright said, Albemarle will focus on the basics of the game while expecting her players “to trust one another so they can play as one.”

Last’s year performance by the Knights’ volleyball team set a number of school records. Gray Stone was 23-1 overall, winning 23 straight games including going undefeated in YVC play and winning both the conference’s regular-season and tournament titles. The Knights earned a first-round bye and a home playoff win over Hayesville before losing in the third round at Murphy.

Tryouts are continuing for the team, Holmes said, saying the Knights “have a lot of opportunity for new talent to present itself still.”

As the team continues to develop as the season unfolds, Holmes said, Gray Stone “is young but I’m excited with what I am seeing so far. We have great talent returning who are amazing leaders, and I know they are going to help mold this young team into something special. We are looking to change things up offensively, so I’m excited to see what this year will bring us. Ultimately my outlook is always the same: take each game as it comes and use each moment to unify our girls as a team.”

Ten players return for another coach in charge of the team for whom she played in high school.

Kadie Morgan returns for her second season with the Comets; last year, North finished 10-15 overall and 8-8 in the YVC. She said she was “very excited to be back as a coach.”

The varsity roster for the Comets has two seniors, including Madi Morris (MH/RS/OH). Morris transferred to North after attending Uwharrie Charter last season; Morgan said she can attack on the front line but has soft hands and can set well.

Camielle Shelton (RS) returns for her senior season as well and will play on North’s front line.

North has also five other upperclassmen in juniors Brooklyn Frick (Set.), Brinn Kimrey (Libero), Payton Landis (Set.), Nicole Lowder (MH/RS) and Merris Talbert (MH/OH). Landis and Frick may both see time on the court as setters. Kimrey is a libero but also can play left-side attack for the Comets, Morgan said. Talbert and Lowder both had a lot of playing time last season as sophomores on the varsity squad.

Three sophomores round out the roster in Cleo Carter (RS/MH), Alex Childress (Set.) and Taegan Lowder (OH). Lowder brings a strong power hitting game to the left side for North. (Sports Editor’s Note (8-13-18): The preceding two paragraphs have been edited as a clairification of statements made to the SNAP by Coach Morgan regarding.)

“I envision this season to be very successful. I believe I have the talent to take us all the way this year. I have a lot of talented young ladies who are very versatile.”

After opening with a record of 1-7, first year coach Eric Laskowski and his Rowdy Rebel Bulls battled their way to fourth place in the Yadkin Valley Conference in 2017 finishing 13-13 overall and 9-7 in the YVC. 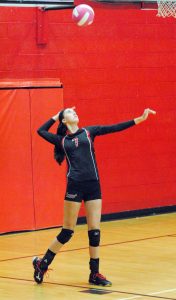 This season, South returns all of its starters, including seniors Adison Campbell, Sidney McSwain, and Star Lee.

“Adison was an All Conference Player and was South’s Player of the Year in 2017. Her leadership in 2017 was invaluable and we will rely on her heavily in 2018 to continue to lead this team,” Laskowski said.

“We are very excited Sidney was able to return to South this year. We will continue to look to her to lead the offensive charge in 2018,” Laskowski said.

Star Lee shared time at the libero spot leading South and finished second in the conference with 255 digs. She also led the team in serve receive attempts with 406 receptions against just 58 errors. Lee also added 29 aces, 17 assists and 6 kills.

“Star is one of our most vocal players on the court and we will look to her to continue to lead our defense,” Laskowski said.

Sophomore Morgan Kinley rounded out the starting rotation in 2017.

“Morgan was called on to set, to play as a defensive specialist and shared time at the libero position. It’s tough on young players when you have to ask them to play positions they may not be used to. Morgan did everything we asked of her last year and did it pretty well,” Laskowski said.

Laskowski said the team will also look to seniors Taryn Tucker (RS), Bethany Forrest (OH), Alexis Faulkner (RS) and Myia Swink (MH) to continue to contribute to the offense and provide pressure on defense with aggressive play at the net. Freshman Keeli Crisco will be called on to strengthen the right side attack. South will also look to Crisco as a second setter.

“The team has worked hard all summer. We are stronger and in better shape than we were last year at this time. Given the experience and leadership on this team versus last year’s, we should see a much better outcome this season,” Laskowski said.

Head coach LaRhonda Watkins enters her sixth season as the Colts head coach. Last season, West was 14-14 overall and 7-3 in the Rocky River Conference. West finished tied for second and won two matches in the RRC tournament to earn a state playoff berth.

After not having a JV team last season, West will have both a varsity and JV team in 2018. 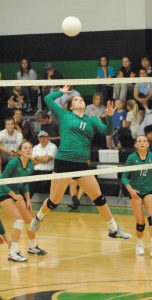 Raelee Furr goes for the kill in a match last season for the Colts. (Photo by CHARLES CURCIO/Staff)

Watkins said the four sophomores “have put in a lot of hard work during the offseason. This talented group will bring a strong core of experience to the Colts.”

“We will still be a young team once again; however, we gained a lot of experience for this coming year.  The team is very versatile with talent and as the coach, I couldn’t be more excited,” Watkins said.

New additions to the team include junior Dani Moss, who transfers to West after going to Gray Stone last season.

Two freshmen joining the varsity squad are Kayli Cleaver and Caylee Clayton whom Watkins said can “contribute with their talents and grow into their roles on the front line and back row.”

Watkins added she has “confidence in the players that they will continue to work hard and improve to get us ready for conference play and be where we need to be toward the end of the season.”