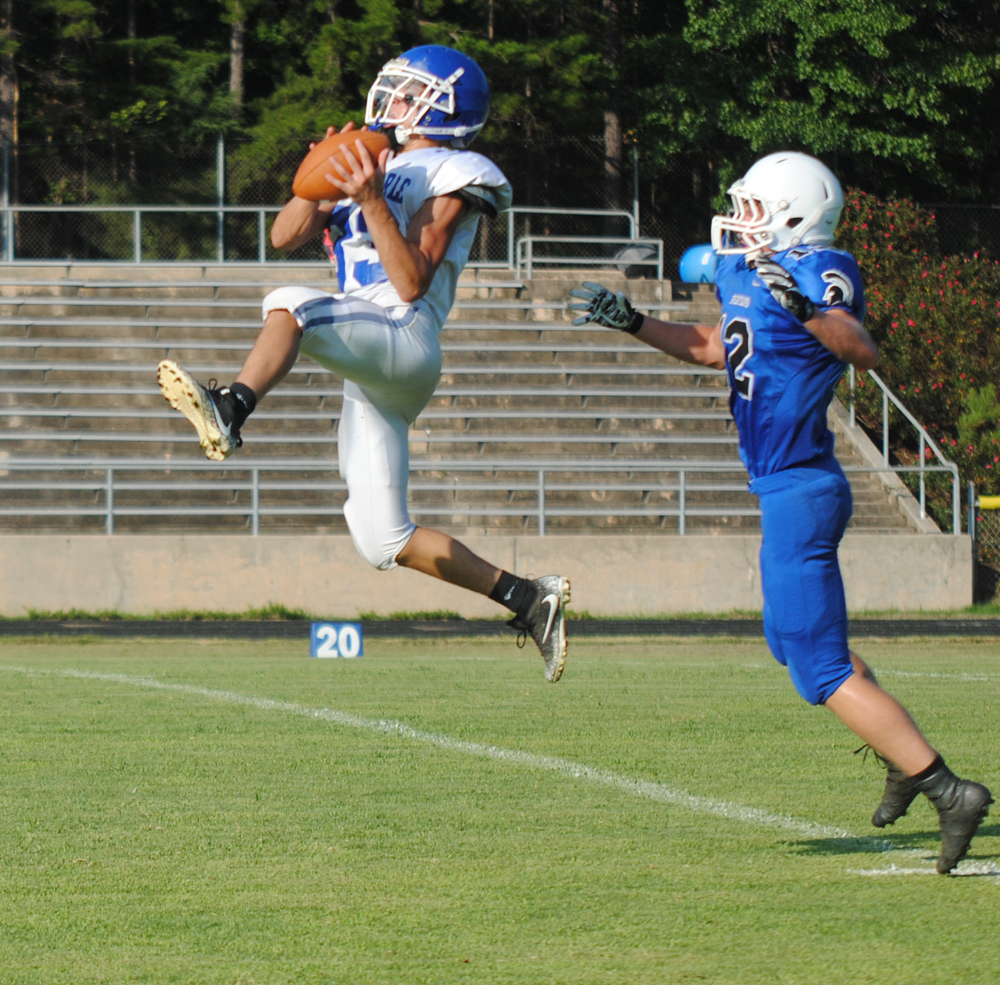 Keshawn Mountin goes up high in the air and picks off a pass from the CSD Spartans' quarterback at Friday's Bulldogs Jamboree. (Photo by Charles Curcio)

Under sweltering conditions on Thursday and Friday, the varsity and JV football teams of North Stanly and Albemarle respectively each hosted three other programs as the high school football season draws to the opening games this week .

South Stanly and West Stanly were both on the road for their scrimmages.

The Bulldogs went with quarterback Levi Nall at Friday’s Bulldogs Jamboree as Albemarle scrimmaged the Community School of Davidson Spartans, the Forest Hills Yellow Jackets and the Forbush Patriots.

Albemarle’s defense allowed two early passing touchdowns, but Keshawn Mounton picked off a pass in the first 10-play set with the Spartans.

Versus Forbush, Nall found tight end Brandon Christian to the home side of the field with a pass. Christian then sprinted into the endzone for a touchdown.

Albemarle also had a rushing touchdown in varsity play against the Yellow Jackets.

Defensively, Adrian Little turned in one of the hardest solo tackles on the day versus Forest Hills, busting through the line and hitting a ball carrier solidly in the backfield.

A number of fans found shade in the shadow of the Bulldogs’ press box to show their support for the teams on a hot afternoon until the sun dipped behind the clouds.

North fans had their first chance to see several new Comets play in full-contact scrimmages including quarterback Bailey Baker, a transfer from West Stanly. Baker settled in and had several completed passes to various receivers on the day. 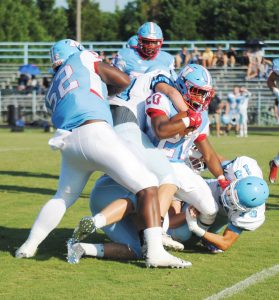 Three Piedmont defenders try to tackle North Stanly’s Cam Davis while the Comets C.J. Clark blocks one of the Panthers during Thursday’s scrimmage at North. (Photo by Charles Curcio)

One of North’s biggest new players is 6-foot-8 Javon Davis, who played a number of snaps at both offense and defense.

Some of the biggest cheers of the day from North Stanly fans came on plays by Comets running back Cameron Davis. He had two long rushing touchdowns and several times needed three and four players to stop him on rushing plays.

Fans filled many of the bleachers on both sides of the field despite the hot conditions of the day.

The Bulls traveled to Southwestern Randolph on Saturday for a scrimmage versus the Cougars, the Central Davidson Spartans, Wheatmore Warriors and Walkertown Wolfpack.

South’s offense scored a number of touchdowns with Justin Gaddy at quarterback. The Bulls outscored the Cougars and Spartans two touchdowns to one, while scoring twice versus Walkertown and not allowing a touchdown to the Wolfpack.

In a 20-minute game situation versus Wheatmore, the Warriors outscored South Stanly two touchdowns to one.

New head coach Ryan Ochier said approximately 200 South Stanly fans made the trip to the scrimmage, which he said was “great community support.”

South was without Jaquez Cooke for the game who was out due to a hand injury.

The Colts outscored South Rowan three touchdowns to one at the first Rowan County Jamboree on Friday night.

“The community support has been great. We played well in the scrimmages, got a lot of evaluating done,” West head coach Brett Morton said.

Sports Editor’s Note: Mike London of the Salisbury Post contributed to this story.