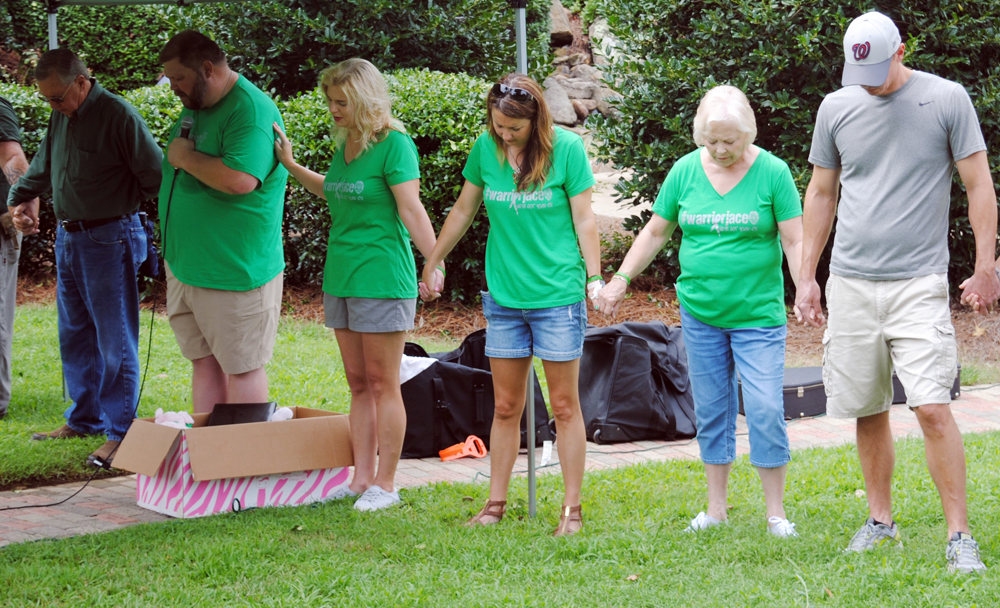 Members of the Thompson family and Rev. Beau Linker pray for Jace during the recent prayer meeting. (Photo by Charles Curcio).

A gathering of around 200 participants recently at Officer Jeff Shelton Park in Locust lifted up prayers for one Stanly youth.

Jace Thompson, 5, has continued his battle with cancer since being diagnosed with a tumor in October 2017. The rare form of cancerous tumor was found on his brain stem.

Thompson went through a month of radiation treatment at Atrium Health before joining a clinical study in Washington, D.C. 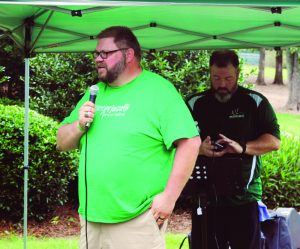 The Rev. Beau Linker, pastor at Badin United Methodist Church, led a cloudy mid-morning prayer service in the park for Jace and his family. After taking a group picture, those assembled formed a circle encompassing a large portion of the park. Linker opened the prayer meeting and then invited others in the circle to share their prayers for the family.

Many in the circle wore green shirts with the WarriorJace hashtag on it, being known as one of his favorite colors. 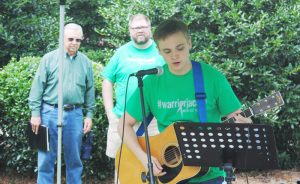 “I sent a friend a text … and we had talked before about community prayer,” Jennifer Thompson said. “She said, ‘I’m on it.’ Today, seeing hundreds of people gathering to pray for our son, it’s completely overwhelming.”

She said she recognized many faces who had driven a long way to be part of the prayer meeting. Many of them may not know the family personally but still came to show their supports.

“That’s what being part of a community is all about: so many believers and people who are not afraid to step out with their faith, rally behind us. We’re blessed.”

“Through this whole process, Jace has never been negative. He has always been positive, smiles. He’s never complained and you feed off it.”

“Jace has changed so many lives. He always has a smile on his face even when you know he hasn’t felt good. He’s got a twinkle in his eye,” Linker said.

“He’s met every challenge he’s faced with joy. I’ve honestly never met anyone like that. Every time I see him, he’s been happy, in good mood even when not feeling the best.”

The Badin minister said Jace “has turned cancer on its head” and “has one of the biggest hearts for a 5-year-old I’ve ever seen. He is so generous; he has so much goodness in him.”

One of Linker’s prized possessions is a pink unicorn given to him by Jace a few months ago. Some of the younger attendees of the event received stuffed animals prayed over by Jace.

This week, Jace and his family reported he is in the Children’s National Medical Center in the Washington, D.C. area, saying he will have another round of radiation treatment.

Linker said the one way people can be involved is through prayer.

“Everything we have done is grounded in our faith,” he said. “We need as many prayer warriors as possible.”

Regarding the turnout for the meeting, Jace’s mother talked about her hopes for the future.

“We’re ready for the healing so we can have an even bigger celebration.”