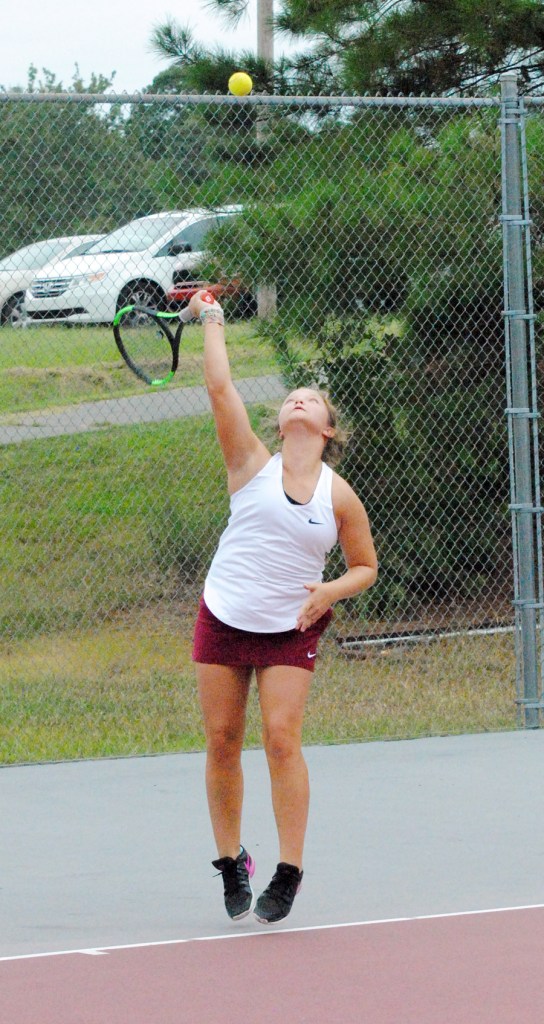 Emma Bost finished as the state runner-up in the 1A singles tournament last season. She returns for Gray Stone for her sophomore season in 2018. (Photo by Charles Curcio)

The Bulldogs did not field a team last season but return in 2018 with a new head coach, Vivian Bridges, and a new outlook.

Albemarle will have seniors Kylie Dixon and Emma Freeman and sophomores Princess Horne and Kamalana Wilder on the team. The young Bulldogs will also have four freshmen on the squad: Hailey Bird, Allison Little, Itza Ochoa and Natalie Sedano.

Bridges said “showing up and staying focused are the keys to positive outcomes” for her team this season.

Despite being a new coach, Bridges said “not knowing how to do something never stopped me from trying.”

A number of players return for head coach Orlando Castillo after the Knights went 14-0 in the regular season and 12-0 in YVC play. Gray Stone lost in the second round of the state 1A dual team playoffs to Bishop McGuinness, 5-4.

Sophomore Emma Bost was a state runner-up last season in 1A singles for the Knights and returns.

“It’s going to be a good year for new players to show what they’ve got, and with four starters from last season returning, it should be an interesting year,” Castillo said.

“We hope to pick up where we left. We have a good incoming class of freshmen with lots of potential ready to take on the court.”

Two coaches, Sarah Harwood and Nancy Napier, will coach the women’s team this season. Harwood will coach the team for her first season while Napier has a number of years having assisted and coached North.

“The girls have worked really hard in the offseason. We’re really looking forward to a great season,” Napier said on behalf of the coaching staff.

The Bulls were 9-4 last season and 8-4 in the YVC under head coach Carla McSwain, finishing third in the conference.

South graduated two All-Conference players last year who competed in the top singles seeds. McSwain said the coaching staff is “rebuilding and grooming some returners to fill those shoes.”

Two seniors return, Keely Salmon and Konner Napier, both of whom are “seasoned veteran players,” McSwain said. Both will play in the top six singles.

South’s goals for the season are to improve each player’s tennis ability, McSwain said, as well as improve “their love for this lifelong sport.” She said she wants the team to grow together as a family building “individual character and compassion. We would really like to earn a winning record and perhaps finish at or near the top of our conference.”

Head coach Vanessa Shields and the Colts were 5-9 last season, but the coach said she hopes to see the team improve this year with more experience.

Two newcomers who Shields said will be adding to the team’s success are senior Jordan Johnson and freshman Maryn Mauldin.

“We are excited about the potential of this team. We hope to have a lot of success and be at the top of the conference,” Shields said.