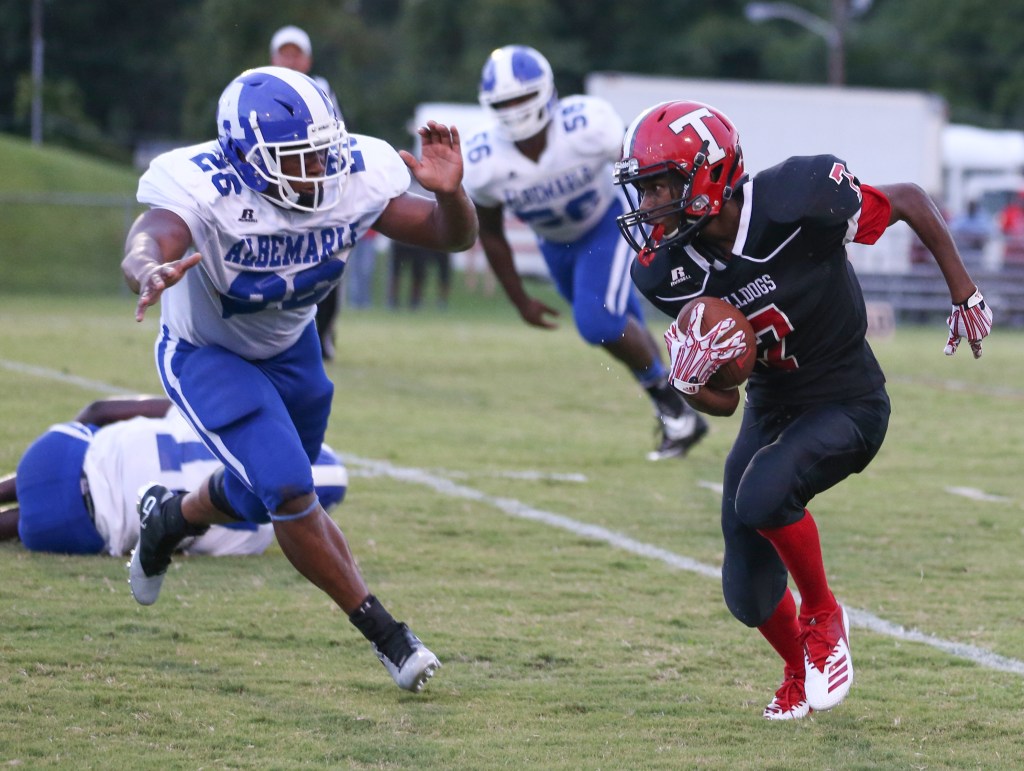 In the modern era of high school football, on average games usually have higher point totals then games from the past.

Albemarle and Thomasville continued their long-standing rivalry at Cushwa Stadium on Friday night in a throwback to that bygone era.

Two defenses forced turnovers and shut down each other until a mistake on special teams set up the only touchdown of the game. Thomasville’s Javon Cunningham scored on a one-yard dive across the end zone with just over eight minutes left in the game to give the red-clad Bulldogs an 8-0 win over Albemarle.

The two teams combined for 20 first downs and neither offense gained more than 200 yards. Albemarle (0-1) had 93 net yards on 42 attempts, losing negative yards on several sacks, one backward lateral recovered by Thomasville, and fumbled snap attempts.

Albemarle had five turnovers in the game, including four interceptions. Two of those picks came in the final minutes of the game after Albemarle twice drove into the redzone.

Thomasville’s offense did not fare much better overall against the “Oak Tree” defense of Albemarle. The host Bulldogs had 189 yards of offense, including 103 through the air from quarterback Landon Johnson. He was 9-of-22 in the game but was picked off twice by Keshawn Mouton and Christian Watkins. 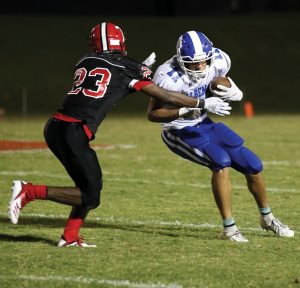 Albemarle’s Brandon Christian fends off Thomasville’s Jamari Little after a catch in the second half of Friday’s game at Cushwa Stadium. (Photo by Earl Bradshaw).

Cunningham led the Thomasville offense with 97 net yards on 16 carries and the lone touchdown. Many of his carries came on a direct-snap wildcat-type offense or on zone-reads from Johnson. As a team, Thomasville had 86 net yards on 30 carries.

The game was littered with laundry on the field. The two teams combined for 21 penalties, many of which came on false starts and delay of game calls. Thomasville had 11 penalties for 81 yards while Albemarle was whistled 10 times for 45 yards.

Albemarle’s first drive ended on an interception when Nall threw downfield and Jordan Williams recorded one of his two picks in the game.

Thomasville gave the ball back in good field position with a fumbled punt snap as the team’s starting punter was out due to injury.

Late in the first quarter, Albemarle drove from its 38-yard line to the Thomasville 42, but Williams picked off another pass and returned it to the Albemarle 32.

Thomasville drove to the 6-yard line on its next drive, but penalties stalled the possession out.

A bad punt by Albemarle on its next possession gave Thomasville another chance to score. Starting from the Albemarle 16, Johnson threw into double coverage in the endzone where Watkins picked the ball off for a touchback.

Neither team got within the redzone in the final minutes of the first half, leaving the game scoreless.

Thomasville took the opening kickoff of the second half and drove deep into Bulldogs territory, but Mouton picked off a Johnson pass and returned it to midfield. Mouton was headed down the sideline with green grass in front of him, but Johnson saved a touchdown with a tackle.

Field position started working against Albemarle late in the third quarter. A mishandled punt snap put Thomasville on the Albemarle 25. Thomasville got to the 8-yard line but fumbled and Eli McCall recovered.

Albemarle went three-and-out including a dropped pass at midfield and had more problems with a punt attempt. A fumbled snap set up Thomasville at the 5-yard line. Three plays later, Cunningham barreled over the goal line for a touchdown.

Without a kicker, Thomasville was forced to go for two. Johnson threw to Timothy Brooks Jr., whose knee came perilously close to touching the ground when he bent down to catch the ball. Brooks recovered and scored to put Thomasville up 8-0.

With 8:37 left in the game, Albemarle drove into the redzone on 12 plays, converting on third down three different times. Hall then tried to find Brandon Christian but was picked off by ShawnJohn Goins at the 9-yard line.

Albemarle stopped Thomasville on three straight plays, then got the ball back at the Thomasville 35 with 1:34 left and no timeouts. On third down, Hall found Christian for a 30-yard gain down to the six. After losing two yards on a run attempt with the clock running, Hall was picked off by his opposite number, Johnson, in the end zone.

Thomasville called timeout, then took a knee to end the game.

“I loved our fight; I thought our fight was a huge positive,” Albemarle head coach Richard Davis said. “Even though for a while it looked like neither team wanted to win the game, I thought we had more fight than they did.

Davis added Albemarle “just made too many mistakes. We made more than they did and they won; that’s typically how it goes.”

Albemarle will travel to West Stanly (0-1) Friday. The Colts lost at Northwest Cabarrus 52-6.