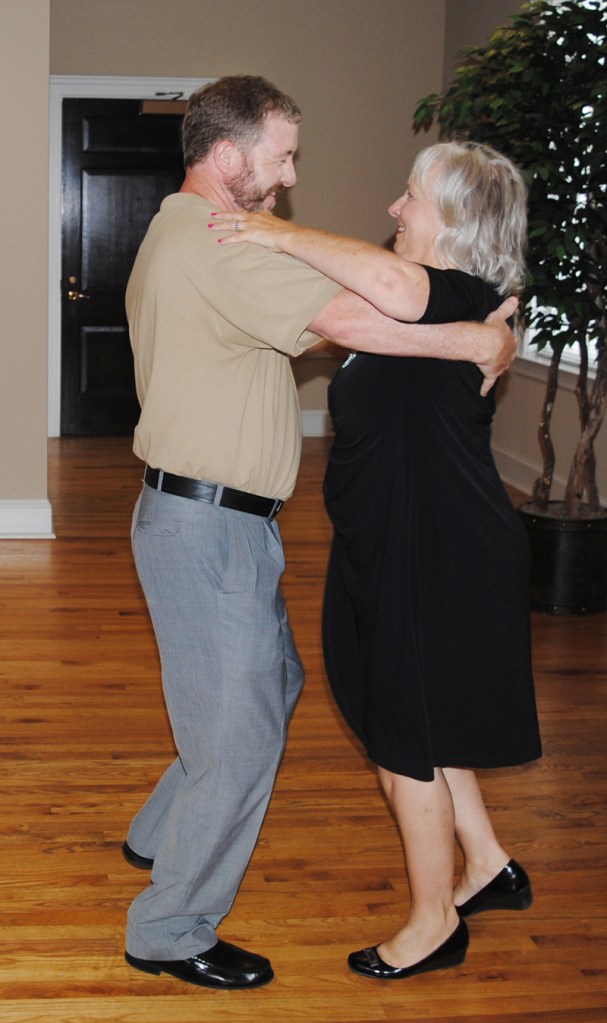 Kelly Lowder (left) and Colleen Conroy rehearse the steps of their Baroque-era dance for the 2018 Stanly County Dancing With The Stars event. (Photo by Charles Curcio)

One of the couples for this year’s Stanly County Dancing With The Stars looks to use their backgrounds in finance to cash in for the Butterfly House.

Albemarle finance director Colleen Conroy and Uwharrie Capital Corporation risk management officer Kelly Lowder will be taking people on a trip back in time. The pair will take patrons of the Sept. 8 event on a journey back to the days of Brahms with a baroque-era performance.

Conroy has been in the audience every year but says she still remembers what former Albemarle police chief William Halliburton said.

“He said the Butterfly House was about to lose funding. I said, ‘Not on my watch,’ ” Conroy recalled.

Since moving to Stanly in 1988, the Pittsburgh, Pennsylvania native said she had hoped to one day get the call to be in the show.

“So now that I’m old and my knees are bad and my toes hurt, now they ask me. There was no way I was going to say no,” Conroy said.

The diehard Pittsburgh Steelers fans has been entertaining theatre fans since moving to Stanly as a part of the Uwharrie Players.

As an audience member, Conroy said a number of silly ideas for dances came into her head. She even envisioned a play on Tom Cruise’s iconic dance from “Risky Business.”

However, when Lowder approached her with the idea of doing a Baroque number, she realized she could not recall a similar dance from the previous events.

“It’s not the most exciting (dance), but no one has ever done it,” Conroy said.

Lowder said he leaned toward a Baroque-era dance for two reasons. For starters, he said he could not see himself doing acrobatics on stage.

The other reason was a link to growing up in the 1980s. One of the decades’ most highly touted movies featured music and dancing of the Baroque period. “Amadeus” was nominated for 11 Academy Awards, winning eight including Best Picture.

In looking at previous events, Lowder also noticed no one had ever performed a Baroque-era dance. He also thought the dancing in the movie was “neat” as a kid.

“We vacillated on the music for it. We wanted something that lasted the right amount of time, in triple meter (3/4 or 3/8) time and was from the Baroque period,” Lowder said.

The music for the dance will actually come from the Romantic period as the duo has chosen a medley of two works by Johannes Brahms. The medley contains parts of Brahms’ Opus 39 and 15.

Lowder is a Stanly native, having attended South Stanly High School before graduating from the North Carolina School of Science and Math. He went west and graduated from the Air Force Academy and also has a master’s degree from N.C. State.

A regular karaoke singer at Badin’s Loafers and Legends Club, Lowder has hosted two DWTS karaoke fundraisers, including one at Five Points Public House in Albemarle.

Lowder said he was “roped” into doing the show, but he is doing the show because his sister, Ginger Efird, is involved with Butterfly House.

A dancer in a previous show, Rodrigo Luevano, suggested Lowder’s name to the event’s organizers and asked Lowder if he would like to do the show.

Lowder’s partner, Conroy, talked about what it meant to her life to grow up the youngest of four kids in a loving household.

“When you grow up in a loving home…you don’t realize how difficult some children have it.”

She said all the effort is worthwhile “if my dancing can make someone else’s life better.”