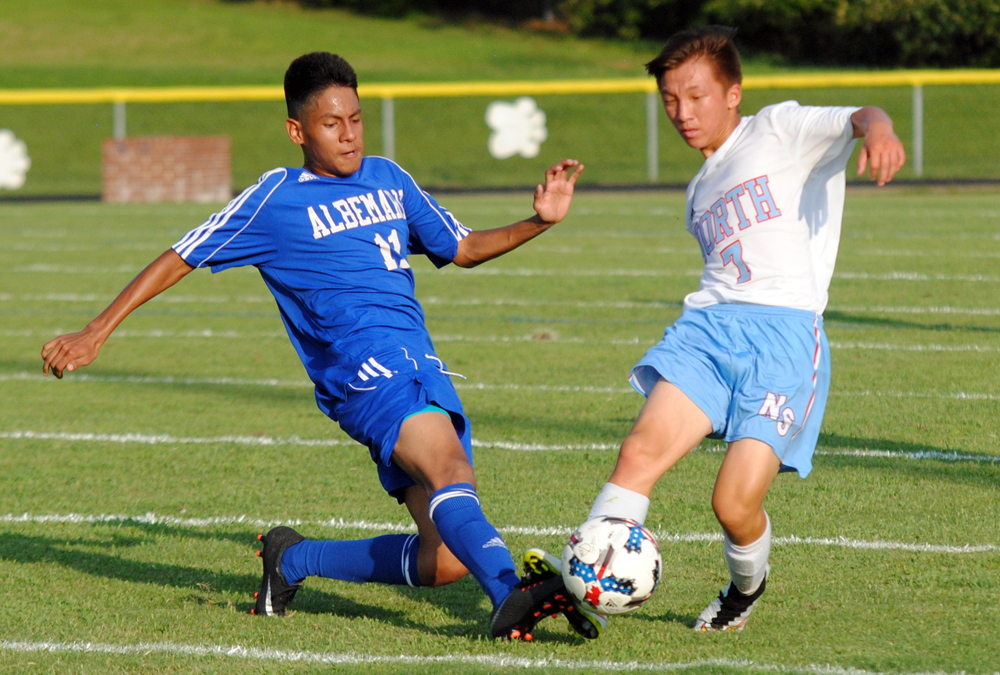 Stanly fans have witnessed some of the most epic athletic battles in various sports for more than 50 years between teams representing Albemarle and North Stanly.

The latest chapter in the continuing sport struggles between the two schools separated by just five miles of U.S. Highway 52 took place Tuesday on the soccer pitch.

Six yellow cards and a red card punctuated the physical play on the field and the tension permeating Albemarle’s stadium. The Bulldogs scored four goals in the second half and went on to a 5-2 win over the Comets.

The Bulldogs looked to score early with a loose ball in the penalty box, but Comets keeper Addison Cord recovered and reeled in the loose ball. 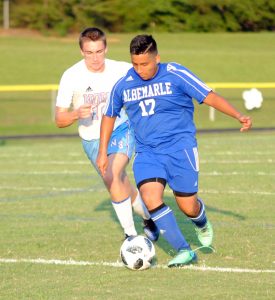 In the seventh minute, Carson Lowder received a yellow card for wearing a bracelet, then a yellow card was issued to the North head coach.

North had more offensive chances in the early minutes of the first half. Albemarle keeper Da’Sean Horne made a save on a corner kick in the 15th minute.

One minute later, Bryson Childress took a free kick from 30 yards out and placed a shot over Horne’s outstretched arms to put North up 1-0.

Albemarle’s chances on goal increased midway through the first half. A loose ball in the goal mouth in the 17th minute was quickly cleared out by North’s defense.

The yellow cards continued in the 18th minute when Albemarle’s Shawn Vang also received a card for a bracelet. He attempted to tape over the bracelet and re-enter later in the game, but the referee did not allow him back in unless he removed the item.

Offensive chances continued for both teams in the first half. Josh Megson fired a shot just wide in the 19th minute, then North’s Childress was stopped on his shot by Horne.

Albemarle got on the board with 4:42 left in the first half off a corner kick. Megson curled the ball into goal mouth where Cord mishandled the volley, tying the match 1-1.

In the final minute of the first half, Childress, one of North’s offensive leaders last season, was issued a yellow card, which would come up later in the match as it went to halftime tied.

Levi Oliver nearly gave North the lead back in the final 14 seconds, just missing a shot high. The half ended deadlocked at one goal each.

Early in the second half, Jevanny Guillen-Perez had a good chance on a long shot which went just wide.

In the 51st minute, North used several give-and-go passes to get a quality scoring chance. The shot went into the back of the net, but just before the shot the play was whistled offsides.

Albemarle broke the deadlock with 27:35 left in regulation. Randy Hernandez dribbled in space in the middle of the field and found Coley Dejak with a pass. Dejak turned around and scored just outside the goalie crease to put the Bulldogs up 2-1.

North continued to get offensive chances, including a long near-miss in the 58th minute, but the Comets lost a player on the field with 17:19 left. Childress was whistled for a foul and given his second yellow, leading to the red card and ejection from the game. North played the final minutes one man down.

In the 65th minute, Albemarle drew a foul less than a yard outside the penalty box and got a direct kick on goal. Guillen-Perez stepped up and scored to the low right of Cord to give Albemarle a 3-1 advantage.

North continued to try and generate offensive chances late in the game, and one finally paid off. With 3:52 remaining, Eli Williams sent a 35-yard shot toward the Albemarle goal. The ball deflected off a Bulldogs defender and got past Horne to pull North within a goal, 3-2.

Just under a minute later, Cord received a yellow card for grabbing an Albemarle player, giving the Bulldogs a penalty kick. Leo Hernandez made no mistake versus backup goalie Mac Barfield, scoring high in the goal to put Albemarle back up by two goals, 4-2.

Axel Hernandez added a final goal in the last 16 seconds of the game off a rebound for the game’s final score.

Albemarle head coach Matt Moeller said his team may have had some nerves in the first, being the first game of the season for the team.

“We lost our game a little bit, too much kick and run,” Moeller said. “We really stepped our game up in the second half.”

The Bulldogs coach said his team preaches several fundamental tenets of the game which helped it deal with the pressure of a rivalry game.

“Respect for yourself, respect your teammates and respect your school. I’m very proud of our boys tonight; they did all three,” Moeller said.

Moeller said he will take away from the game how well Albemarle responded in the second half.

“We used a deep bench; it was warm tonight and a lot of kids got to play. We pretty much ran (North) into the ground…. A team is about everybody coming together with a single purpose. You saw that in the second half. I would give it about a B or B+; there is a lot more we can get out of these players,” Moeller said.