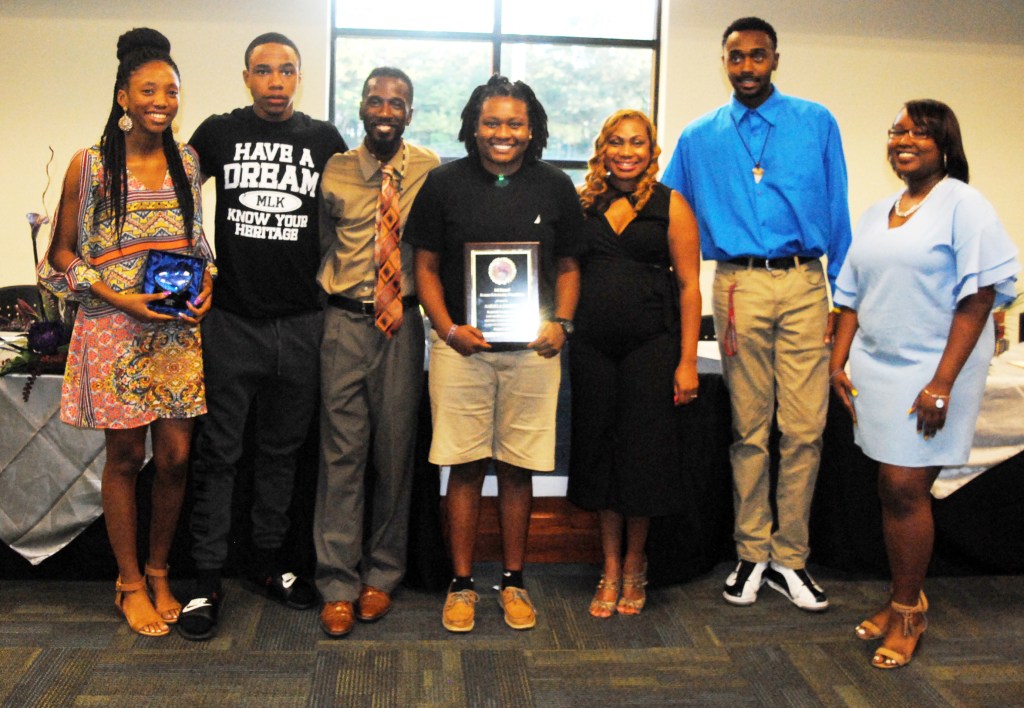 Central Elementary Principal Melissa Smith gave opening remarks about the need for college scholarships. She noted college tuitions have continued to rise but “with the economy so unbalanced, parents don’t have that much money nowadays.” 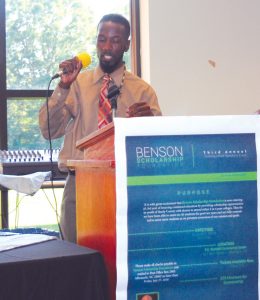 William Benson is the founder of the Benson Scholarship Foundation. Six youths recently received assistance from the foundation.

Smith also said as the cost of college living, including rent, food, books and more, has gone up tremendously, state support has gone down. She also described student debt in the country as “insurmountable. Right now, money just doesn’t grow on trees.”

Smith talked about her father, saying he was “the strongest man alive” and “the most intelligent” while her mom worked hard picking plants and tilling the soil while having eight children. Her father was a garbage man who was forced to drop out of school in the sixth grade to take care of his family. Her mother was in school until the 10th grade, but Smith said “she didn’t let that stop her [from] going back to school to get her diploma.”

Her parents always told their children, “we want something better for you than we had.”

“We did not realize we were impoverished,” Smith said, but what they did have were family that cared for one another and had ethics.

Smith eventually received a black scholarship award as well as a Citizens Scholarship of America through Waste Management.

“I got through college in four years and I am a principal today; ain’t God good?” Smith said to a big round of applause.

The distinguished speaker for the event was the Rev. Darryl Medley of Spirit and Truth United Church of Worship in Albemarle. He was introduced by his wife, Rhodda, who said the two met at Johnson C. Smith University in 1971. He has three children and five grandchildren “and is a true man of God, full of God’s word.”

Medley’s title for his comments to the banquet, specifically to current and future scholarship winners, was straightforward: “Congratulations, now go to work.”

Work is not just what “we have to do in the morning” like a job, Medley said. Work is peformance, productivity, obligation, servitude, a daily grind and an undertaking.

The scholarships awarded from the foundation, Medley said, mean “we believe in you; we know you have capabilities…we believe in you as a community, as a church, as parents. Through work potential is expressed in tangible form.”

Medley graduated from North Stanly in 1981; in his senior year, he realized he had to make some plans.

“All of my classmates were going to college; I thought it was a good idea. I went with great expectations and anticipation of accomplishing great things,” Medley said.

However, he admitted being in Charlotte was more exciting than being in class.

“The only thing good I brought home from Charlotte was my wife,” he said, adding he did not realize at the time that success takes work.

Medley said the recipients have a responsibility to do well, “to respond to your ability.”

“Potential without work is poverty. If you never bring forth the potential, it never produces what it was designed to do,” Medley said. He added that if those recipients do not put in the work then “everything you’ve accomplished to this point is nothing.”

Madeline Rivers, president of the Salisbury chapter of the Delta Sigma Theta college sorority, made the presentation. The chapter covers both Rowan and Stanly counties.

Rivers said the chapter has been active for 65 years promoting scholarships, service and “giving back to the community.”

She then presented Lyric Townsend with a $1,000 college scholarship, saying the chapter hopes the award helps her achieve her goals and pursue her academic dreams.

Townsend, the daughter of Albemarle Councilman Dexter Townsend, thanked the sorority members in attendance. She also said she was attending UNC-Greensboro in the fall to major in speech language pathology.

Benson said as the event continues to grow, new scholarships continue to be added to it.

Included in this year’s event was the first awarding of the Mary Elease Blackmon Townsend scholarship. The scholarship was named for Townsend in order to bring awareness to heart disease. Townsend suffered a massive stroke in 1999, according to the scholarship’s flyer. The flyer also said she “was a loving individual who believed education was very important.” She passed away in 2017.

Requirements for applicants were for high school seniors to have a 3.0 grade-point average, two letters of recommendation and community service hours.

“The one thing I know she wanted for all of us was to be strong, independent and have common sense, have life skills,” Baldwin added.

The winners of the scholarship were Lyric Townsend and Shawn Baldwin, each receiving $250.

Benson then spoke about his cousin, Stephanie Mills, a Grammy-award winning R&B singer with whom he has toured before.

He said in speaking to his cousin, she expressed an interest in wanting to support the Benson scholarship event. Mills’ son, Farrod, has Down syndrome, and in talking together about things, Benson mentioned one of his students was about to major in special education.

So Mills said she wanted to help her out because Down syndrome “is near and dear to my heart.”

Benson announced, in a surprise the winner did not know about ahead of time, that the winner of the Mills Scholarship was Samaria Lilly.

Lilly will attend Pfeiffer University in the fall and will play volleyball for the Falcons as well as study special education. Benson presented her with the scholarship and a glass heart.

Benson went on to tell everyone Lilly has a brother with autism, which also touched Mills’ heart.

“I want to thank her so much for this opportunity, It’s very emotional,” Lilly said.

In a video on Facebook, Mills said she gives her son “special love, special patience and special everything because they can do everything as long as they are in the environment to do that.” She wished Lilly the best, saying “buy your books or something special for yourself.”

The church annually does a scholarship for all of its high school graduates, the Rev. Darryl Medley said. Anyone heading to trade school or a two-year college or the military receives a $250 scholarship from the church, while those attending four-year institutions receive $500.

Medley presented a $500 scholarship to King Medley, who will attend and play basketball at Erskine College in Due West, South Carolina in the fall.

“This says we believe in the potential that God has placed in you,” the Rev. Darryl Medley said in presenting the scholarship. “It’s time to go to work.”

The final scholarship of the night came from the Benson Foundation. This scholarship includes an interview process.

South Stanly High School graduate Makayla Dockery was the recipient of the $500 scholarship. She shared her situation at the banquet, saying she ruptured her patella tendon on the first day of basketball practice last academic year.

She was unable to walk for six weeks, but because of her determination and effort she went through four months rehab for her injury and will play next season at Warren Wilson College.

Dockery thanked the foundation by saying “with everything that went wrong this year, finally something went right.”

In closing, he added the scholarships are out there in the community for students to receive, but those kids have to go out and do the work.