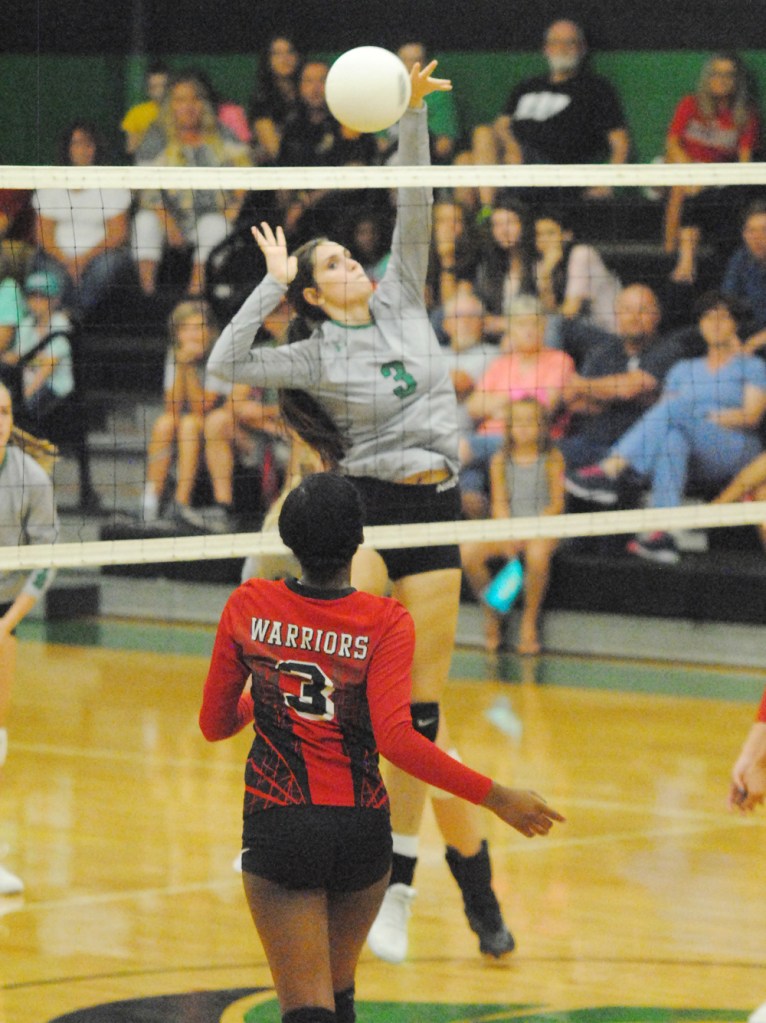 West Stanly's Madison Kee goes up for a block of a Warrior kill attempt in Monday's home win. (Photo by Charles Curcio)

Addie Barbee led West Stanly  (3-1) in two stat categories with five of the team’s 18 kills and seven of West’s 14 assists. The Colts had 29 aces in the game led by Madison Kee with eight.

West Stanly built an early lead, going up 14-7 and forcing a timeout from the Warriors. The hosts continued to build the advantage in the opening set, winning by 10.

In the second set, the Warriors led early 6-2, including an ace from Maddie Coble, forcing the Colts to call timeout.

West Stanly worked back into the set, getting a block and later an ace from Madison Kee to eventually pull into a 9-9 tie. The Colts surged forward including a Riley Barbee kill to lead 12-9, with the Warriors calling timeout.

Kayli Cleavor had a kill and two aces along with a tip from Riley Barbee as West Stanly continued to build its lead. Addie Barbee’s tip winner gave the Colts the set

The third set saw both teams play even for the first few points. West Stanly won a long point to tie the set, 7-7, then took the lead with a 9-2 run. Kee had four aces in the run.

Abbie Yarboro stopped the momentum briefly with a kill for the Warriors but West Stanly continued to surge forward. Riley Barbee posted a kill, then later t, Caylee Clatyon’s ace won the final set by 13 points.

“Tonight did not show our best game. We had a lot of mental errors,” West assistant coach Steffi Dutton said. “We did well serving but we also missed 11 serves.”

The coach added West “may be young age-wise but skill wise we are playing well above.”

The Colts continue non-conference play tonight at 4A Hickory Ridge.