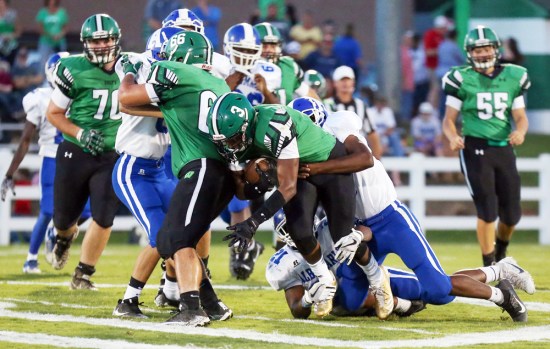 West Stanly sophomore running back Jordan Poole fights through the tackles of two Bulldogs defenders including Christian Watkins (No. 21) in Friday’s game. (Photo by Earl Bradshaw). 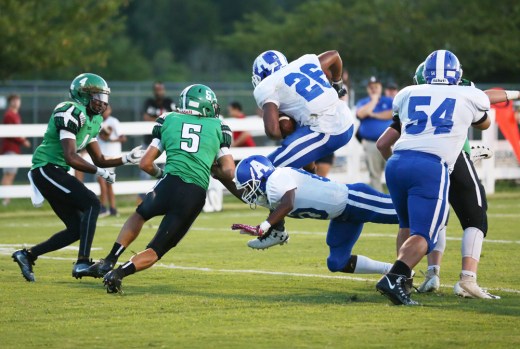 Bulldogs running back Eli McCall vaults over a teammate while West StanlyÕs Lukas Scott (No. 5) looks to make the tackle. (Photo by Earl Bradshaw) 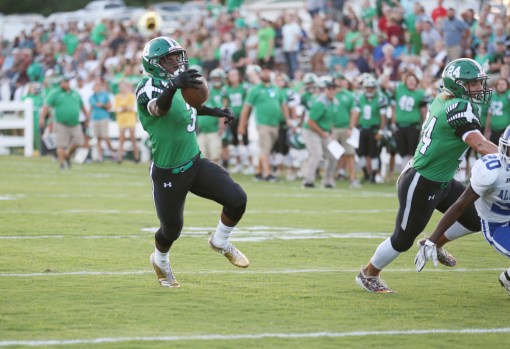 West Stanly's Jordan Poole gets a block from Hunter Stoker (No. 24). (Photo by Earl Bradshaw). 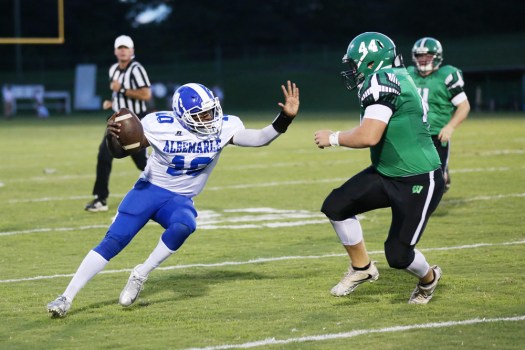 Both coming off losses from the opening week of the 2018 season, the Albemarle and West Stanly football teams met on an unseasonably cool Friday night in Red Cross.

The Colts started and ended the game in strong fashion, taking an early lead then rallying from a 16-point deficit to force overtime. West then stopped Albemarle on a two-point conversion in the first part of the extra session. Aldo Cruz’s extra point after Jordan Poole’s touchdown run lifted the Colts to a 29-28 win.

Both teams made a living in the game offensively on the ground. West Stanly (1-1) rushed for 244 net yards on 33 carries, led by Lukas Scott. The senior rushed for 131 yards on eight carries including an 80-yard touchdown in the third quarter. Jordan Poole added two rushing touchdowns and 78 net yards.

Nick Parker had 38 passing yards, completing 2-of-5 through the air. One of those, a 26-yard pass to Hunter Stoker, helped to send the game into overtime.

Eli McCall led Albemarle (0-2) and all running backs in the game with 151 yards on 23 carries. He also scored three of the Bulldogs’ four rushing touchdowns.

Quarterback Manaurian Hall added 86 rushing yards and a touchdown for Albemarle but was 0-of-4 through the air.

Albemarle dominated time of possession in the game, including a drive of 7:25 to start the third quarter. McCall’s second rushing touchdown of the game gave the Bulldogs the team’s biggest lead at that point, 22-8, along with a two-point conversion.

West took the opening kickoff and went 65 yards in nine plays, capped off by a Poole eight-yard TD run. A bad snap on the point-after try kept the game 6-0 in favor for the Colts.

Albemarle tied the game early in the second quarter with a 92-yard march down field, initiated by a 58-yard run by McCall, who finished the drive on fourth down with a two-yard touchdown.

After stopping West midway through the second on downs, Albemarle drove 46 yards in 10 plays to take five minutes off the clock. Hall was initially stopped on fourth and goal at the two, but a face mask penalty gave the Bulldogs another chance. Hall scored the touchdown, then found T’Ziah Quarles with a pass for the two-point conversion, putting the Bulldogs up 14-6 just before halftime.

West’s only turnover of the game came in the final seconds of the first half. Parker attempted a pass but was hit as he threw the ball and it floated into the hands of Adrian Little.

Leading by eight to start the third quarter, Albemarle took the opening kickoff and went 12 plays down the field to score. Two holding penalties backed the Bulldogs up, but two West penalties help Albemarle get out of the shadow of its own end zone. The Bulldogs converted three times on third down and McCall scored from five yards out. Hall then ran in the two-point conversion.

A defensive stand by West Stanly gave the Colts a boost midway through the third. Albemarle had four plays inside the red zone, but Hall threw incomplete on third down and then tried to roll out and fumbled the ball for a 10-yard loss one play later.

On the next play, Lukas Scott ran a trap straight up the middle and did not stop until he found the end zone, outracing Albemarle defenders the length of the field. Jaquan Ingram then muscled in the two-point conversion to make it a one-possession game.

“Coming into the locker room at halftime, the coaches asked me if I’d like to play both ways and I said ‘Absolutely,’ ” Scott said. “On that first play, the offensive line said, ‘I got you.’ ”

Scott said that play “swayed the momentum in the second half.”

The Colts had a chance early in the fourth quarter to tie the game, but a long drive fizzled at the Albemarle 13.

Albemarle ran some clock on its next drive, but the Bulldogs’ second turnover of the game proved the most costly. Little took a carry straight up the middle, but before he was stopped Hunter Hathcock ripped the ball out of his hands. The junior defensive lineman then returned the ball down to the Bulldogs 36.

Two plays later, Parker threw a swing pass to Stoker, who was lined up as a wing back. Stoker raced down the visiting sidelines and scored. Scott then easily scored over the left side of the line on a two-point conversion, tying the game 22-22.

Albemarle drove the ball down the field in the final 4:20 of regulation, getting down to the West 19, but could not score and the game moved to overtime.

In overtime, each team gets a chance to score from 10 yards out. Albemarle went first and scored two plays later when McCall found the end zone.

Again going for two, Hall was stuffed trying to run between the tackles, giving West a window of opportunity.

Needing a score, West lost a yard on its first play, but gave the ball to the team’s talented sophomore running back.

“It wasn’t too much pressure; our coaches talk about big players making big plays,” Poole said about the overtime situation.

Poole took the ball around the right side of the line and scored to tie the game, 28-28.

“(The offensive line) helped me get outside, then I just cut it up,” Poole said.

The task of sending the game to a winning resolution for the Colts came down to kicker Aldo Cruz. The senior had some experience kicking in clutch games, including the extra point in 2016 which lifted West to a 29-28 win over North Stanly and the Stanly Cup that season.

“That’s what I’m here for, to make plays to help us win games,” Cruz said.

Cruz stepped up and calmly delivered the extra point to give West the win.

“Lukas, the trap he took, that turned the game,” West head coach Brett Morton said. “The defensive stop allowed us to tie it. It’s all a credit to the kids.”

“When momentum is on your side, it’s great; when it’s not, you have to fight to get it back.”

Morton credited McCall’s efforts for the Bulldogs, saying: “he is one heck of a player; he ran hard all night and played defense. He was a one-man wrecking crew.”

West’s win moves the Colts’ active win streak over Albemarle to five games. It’s also the fifth time in the 42-year history between the two schools one team won by a single point.

Scott said the win helps West in its goal of “cup chasing” for the Stanly Cup.

Morton added the win “was one step in the direction of where we need to go. We still have a lot to do before our game next week; now we are focused on North Stanly.”

The Colts host the Comets Friday at 7:30. North Stanly was off this week.